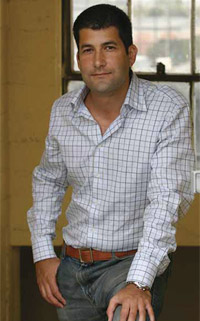 When gifted writer-producer-director and Louisiana native Bennett Davlin gets an idea for a creative endeavor, stand back and take notice because it’s a safe bet that with his immense talent, smart business insight and endless drive, he will bring the project to a full and exciting fruition. In his debut novel, “Memory”, a gripping psychological thriller recounting one man’s journey through the memories of a killer, Davlin showcases his deft ability to keep readers clinging to the edge of their seats while taking them on an intense ride, feeding them surprise after suspenseful surprise until they reach a terrifically unexpected and twisted ending.

Davlin, whose scriptwriting credits include The Medallion starring Jackie Chan, resides in Los Angeles today. But on January 16 he was in New Orleans for a well-attended signing of “Memory” at the Windsor Court Hotel, which served as the starting point for his national book tour. Plenty of new fans were eager to dig into “Memory” through a lively discussion and discourse on the book. Lucky for them and others who have become acquainted with this dynamic author’s craft, “Memory” will be released this spring as an independent film, starring Billy Zane, Ann-Margret and Dennis Hopper. Not surprisingly, the multidimensional Davlin served as director, writer and a producer as well.

New Orleans Living sat down for a chat with Davlin and talked about “Memory” and his multifaceted career in Hollywood.

Bennett, tell us a little about “Memory” and where the inspiration for the novel came from.

The essential concept of “Memory” is if you could see through someone else’s eyes, what would that be like? How would that affect your life? How important are memories and what are we outside of the scope of our memories? I was in an anthropology class at Tulane and we were talking about Neanderthal man and the idea of genetically inherited “Memory”. Behaviorists said that organisms have their ancestors’ memories and humans developed learned behavior, and our society changed so drastically we didn’t have a use for it, so we sort of lost those things. Because what use is an instinct in a world that’s constantly changing, unlike the animal world where the swamp is always the swamp? And the moment I heard that, I was reminded of things like the movie Eyes of Laura Mars, or something involving a psychic who saw through a killer’s eyes. And we’ve seen that before so many times, but what was unique to me was using science in a believable way to sort of tweak an old genre, to sort of have a scientific explanation of how one can see through a killer’s eyes and what that would be like. That definitely struck me. I mentioned it to a geneticist and one thing led to another, and here we are.

And these memories we’re referring to actually belong to other people, giving meaning to the theory that our memories are not gone—they still thrive and intertwine with instinct.

Yes, we kind of discount instinct—we say “Well, that’s instinct!” OK, but what is instinct? How do animals know to swim 2,000 miles away to breed when they’ve never been there before? And what if humans had those kinds of skills and we’d relive them? That’s from a construct standpoint. From a fundamental standpoint, I think “Memory” is about how important the past is and that the future is really just a sum total of all the events that have happened in the past, and I think all the characters in “Memory” are engaged in discourse with the past.

That was very interesting to see that you had developed the characters in a very personal manner, especially for a thriller.

Dennis Hopper’s character—Dr. Max Lichtenstein—his wife died. He’s lonely; he’s almost living in the past. Ann-Margret’s character, Carol, seems to be captured by the past as well. And Billy Zane’s character, the main character— Dr. Taylor Briggs—his mother has no past because she has Alzheimer’s disease— so she’s gone now. And you’re in Taylor’s head an awful lot. It’s more a portrait of him than anybody else, and he has real familial bonds with people who are not his family. He never knew his father and his mother is gone and he needs these things. And I think the bonds between the characters are probably the most interesting part, because a lot of times thrillers don’t develop character, they don’t develop the past. And not to give a lot away, but the killer is a very unique individual who has his own rationalization for what he’s doing. And I think ultimately it’s a rationalization that anyone can understand. It’s trying to make something that we don’t want to be relatable indeed relatable.

Did this book ever become hard to write for you?

When I was writing “Memory”, I didn’t know how to end it. I didn’t truly understand what my killer was doing. But after a series of events that involved going to see my sister in New York and viewing an art installation at the Met, I walked in and saw this painting—and I don’t want to give too much away— but I immediately understood what my killer’s motive was and that’s hopefully behind the inspiration.

Since you are in the unique position of being the novelist and the screenplay writer of “Memory”, is the process of taking the novel down to a script similar to taking your baby and chopping off limbs?

Yes, it is, but you happily do it. People think they know about film, but until you’ve written a film and then directed, produced it, edited it and watched it— I mean really lived with it—I don’t think you understand how different the art forms are. It’s challenging. Film is subconscious; novels are all conscious. You can’t be subconscious because you’re speaking in words, and words are inherently conscious constructs, they’re pictorial symbols that encapsulate ideas. With movies its imagery and sound and music—it’s subconscious. It was a difficult script to write after writing the novel, and it’s a very dark story and I’m not that dark! (Laughs). I worked with a really gifted producer-writer named Anthony “Tony” Badalucco, and then I went back and made some changes to the novel. It was a breath of fresh air retweaking it. I love screenplays because I write them with other people, which is always much more fun than writing them by yourself.

So is it true that elements that often work in a book don’t always work on film?

Yes. It’s inherently different, so I do say chop that baby up to make it work! You’re asking someone to drive to a location, spend their money and sit in a dark room to watch your movie, and that’s an awful lot to expect of an individual, so you better darn well put a lot of work into it and impress the heck out of them or they’re not going to go see your next movie. I do love both art forms; they both have amazing places. They’re both dreams. One is a dream in which you see something someone’s presenting to you and one is a dream in which you are asked to conjure up something. But beyond that, there aren’t a lot of rules to this—it’s using skill and how you are going to play things out.

What did you learn about yourself from writing “Memory”?

There’s a lot of darkness to it, but I think what I learned most is probably an understanding that you are not saddled with the crimes of those that came before you. I think that’s the inherent thing. The wonderful thing about human beings is that although we do start with genetic influences and with traits, we are pretty much blank canvases and we go from there. You can take a human being and turn them into anything; we can be monsters and we can be beautiful. This is a guy who has these memories of being a killer. So how does a good person deal with that? You’re remembering a crime you didn’t do, but you’re remembering it just like you did do it. And how do you deal with that and how do you hold on to who you are? That’s the moral statement this book makes.

How hard is it to wear the many hats of novelist, screenplay writer, director and producer for one project?

It’s difficult; the movie business is a collaborative art which forces you to work with lots of different people and some of those collaborations really work out well. I think the politics of moviemaking can be difficult because it’s like someone is stabbing your baby and they don’t even care about the project. And you have to be pretty tough to deal with that, and I know many people who couldn’t deal with it and they aren’t in the business anymore. You have to evolve and do what you need to do.

Do you want to get involved in the film community here in Louisiana?

Yes, I was born in Louisiana, and I was raised and schooled here. I’ve been in Los Angeles for over eight years, but before that I was in Louisiana. I graduated from Tulane in 1993 and was in Tulane’s MBA program, but I had to leave in order to take over a business in Louisiana. So this is my home. And if they had made movies here and there would have been a way for me to get involved back then, I would have never left. When we started “Memory”, we made a real concerted effort to try and shoot it here, but it was extremely difficult to get crew members and no one knew if the credits were real, and we weren’t in a position like large movies studios to take a risk and proceed, so we shot it in Canada.

But it’s great that you began the book tour here in New Orleans ….

My major executive producer, Robert Monroe, is also a New Orleans local, and we thought it was key to kick the book tour off here. It’s a couple of months from the movie release, but we wanted to make sure that we had a presence here in this market. And I’d love nothing more to make other films in Louisiana and to launch those from here and just do anything to help the community. I’m working on other things, like a sex thriller called Rufinol and the Modern Art of Dating and a threepart kids’ film called The Omega Kids Trilogy and a TV show called Southern Justice, and I hope to make them all happen in Louisiana. Even after Katrina, it’s an amazing place to work and the people are incredible. I’d also love to teach here and do seminars for Tulane for film studies or be a guest lecturer or something—the key here is to train people locally and to create an infrastructure for the future of film in Louisiana.

So tell me, Bennett, how does one get to see the seemingly impossible dream of writing a novel and making its companion film become a reality?

You’ve got to be absolutely obsessed with a project in order to get it done. It’s all you think, feel, breathe, live—you don’t have much of a life. There’s a huge perception that people in this business party a lot, but if that’s true I haven’t seen it! It’s lots of hard work, compromise and sacrifice to get yourself to a certain point. You just fall in love with a project and then you’re just willing to destroy your life over it because that’s about what it takes! (Laughs).