With its New York–trained staff, Stardust Salon is a cut above

Armed with a vision and a nice-sized savings, Jerry Miller walked away from a secure position managing a clothing store to open his own business. Today Stardust Salon, housed in a 150-year-old building with plaster walls, a stone floor and eclectic decor, is one of the most popular hair salons in the city.

What’s your background in hair?
I went to school for hair in 1989 and trained under a fantastic stylist named Chuck Kelly. His salon was one of the top-rated in the country. I moved to New Orleans [from Gulfport] and tried to get a job at Busta’s Salon, which in the early ’90s was the best salon in New Orleans. But he wouldn’t hire me because I was straight [laughs].

When did Stardust open?
I originally started with a partner and opened Stardust in 2000 with three stylists; by 18 months we had five. Then Busta’s became available in 2002 and we bought it. We had ten stylists there and a great location across from Emeril’s; but due to contractual issues, we decided to move everything into one building at 1904 Magazine. We went from a nice, quiet little salon to a really big deal all at once.

Wow, that sounds insane.
Yes, it was. Before Hurricane Katrina, we had added an aesthetician, a massage therapist and a manicurist. We had also expanded to occupy the building next door. We were listed in Gambit’s Best of New Orleans in ’02 and ’03. And at that time, our part of Magazine Street was still a developing area. Stardust was the only business on the block.

What can a client expect to find at Stardust?
Our clients are college-age to mid-forties. Busta’s was very Hollywood; Stardust is a lot more New York. We know we do good work, and there’s maybe a little attitude that goes with that. We send all our stylists to New York to the Bumble and Bumble school. We do advanced training within the salon with our master stylists teaching junior stylists so they can move up the ranks and do better work. We pride ourselves on having the best hairstylists.

What sets Stardust Salon apart from other salons in the area?
If someone comes to the salon and loves it, they’ll tell two people. But if someone has a bad experience they’ll tell everyone they know. So we make sure our clients have a good experience while they’re here. We have the best shampoo bowls in the city. They’re made so that the client actually lies all the way down with their head resting on a pedestal, not hanging in the bowl. When someone comes in to get a professional haircut, the shampoo is supposed to be one of the nicest experiences.

As far as I know, we’re the biggest independent-salon in the city. And my thing is, we’re in the fashion industry, we shouldn’t be wearing uniforms. If someone comes in and wants you to change their entire look, they want to see that you have some style. Even though our stylists range from 22 years old to 56 years old, everyone has their own sense of style.

How has the salon changed since the hurricane?
We’re back up to 14 stylists, and through the rebuilding process, I realized that I only wanted to concentrate on what we’ve always done best. The spa services that we offered were to make Stardust more of a one-stop shop. But I never felt like we were a spa. The music was always a little too loud; it’s a lively place. I just want to concentrate on what we’ve always done best—which is hair. 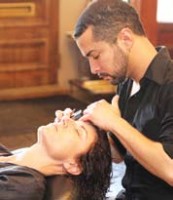