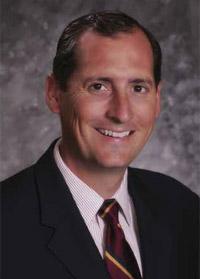 While the city is filled with tales of executives pulling up stakes and relocating out of town after Hurricane Katrina, sometimes the moving truck heads the other direction.

Prominent Harrah’s Entertainment executive John Payne is using a big promotion as a springboard to get back to New Orleans more than a year after his company relocated his family to Atlantic City in the wake of the storm. The gaming giant named Payne, a former general manager of Harrah’s New Orleans Casino, president of the company’s central division, formerly headed by exec Anthony Sanfilippo.

The position, which oversees eight casinos in Louisiana, Mississippi and Indiana, could have been located anywhere, but Payne wanted to come back to be part of the city’s rebirth.

“We could have located many places in the South, but me and my family wanted to return to New Orleans,” he says. “[The city] had gotten in our blood, and we always knew at some point we would return. It came quicker than we expected.”

Payne is originally from Washington, D.C., and his wife grew up in Los Angeles. But the couple spent almost five years in Louisiana, starting with Payne’s job running Harrah’s Lake Charles casino in 2000. Two years later, he was named general manager of Harrah’s New Orleans, where he oversaw development of a hotel and the expansion of the property’s theater and restaurant offerings. He stayed in the city after being promoted to Gulf Coast regional president in 2005. However, hurricanes Katrina and Rita shuttered all properties in his division and the company moved him to the East Coast in November 2005 to oversee operations in Atlantic City.

Payne started his new post January 1 and plans to bring in additional regional administrative positions to the city. He says it’s important that businesses do their part to create opportunities for people to move back to New Orleans. There are so many misconceptions across the country about the state of the city, its economy and the pace of recovery.

“Having spent time with a lot of people up north, I have explained that this is not a yearlong process. This is a decade process. We need to help people get their homes rebuilt,” he says. “We have to do a lot to attract business back here. We are going to have to do things differently to encourage business to come back. And we need to do that.”

Business at the downtown casino is growing despite a marked decline in visitors. Monthly revenue topped $30 million for most of last year since the casino reopened in February. The casino has posted solid revenue gains each month over the same time a year ago despite fewer customers. The property routinely attracted well over 560,000 visitors each month before the storm. Last March, the casino admitted 310,000; admissions have steadily grown since, topping 410,000 in December.

“Business is good. Business can always be better,” Payne says. “The convention business and the walkup business is not as strong as it used to be. But I have great faith that will continue to improve.”

The casino has beefed up attraction, adding a $150 million hotel this past fall and opening several new restaurants and shops along Fulton Street. A new musical, Hats, debuted in January.

Payne says the new hotel has helped bring visitors to the city.

“It’s hard to get a room at Harrah’s New Orleans. We’re running at 98 percent occupancy,” he says. “We plan to run at that level for the rest of the year.”

Payne and his family, which includes three daughters, ages 8, 6 and 2, have been living in the hotel while renovating their new Uptown home. Like many others in the city, they’re looking forward to getting back into a house.

The next challenge for Payne? Helping the tourism industry spread the word that New Orleans is getting back on its feet.

“There is work to be done. There is a lot of educating and letting America know that they are welcome back now. There are many attractions that are available, whether it’s the casino, the aquarium, the French Quarter, or the hotels that are up and running. We need to get that word out.”

1.02K
previous The talk of war
next Rod West