A couple find freedom in their Warehouse District dwelling

A little over a decade ago, shortly after completing Ayn Rand’s “The Fountainhead,”

Gail Gelfand looked around her Uptown, antiques-filled home and questioned the way she and her husband, Arnie, a dentist, were living. Inspired by the book and encouraged by pals Carey Bond and Henry Lambert’s move to large spaces filled with contemporary art in the Warehouse District, Gail was seized with the idea of living the loft life. She suddenly wanted to be surrounded with midcentury modern furnishings—clean of line, sleek of spirit and accented with art from local galleries.

Before long a “For Sale” sign went up, an existing art collection was culled, and a plan for future living was in place. Resolving to take only a few pieces of furniture representing the family’s history in the houses they had owned in Uptown and in Mississippi, which served as a weekend getaway, Gail called in H & H Estates to dispose of a houseful of treasures.

The couple found in good condition a spacious warehouse, which had originally been a 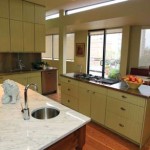 carriage shop dating from 1865. It is situated on Girod Street near the hub of activity that grounds the American Sector … hip galleries, trendy restaurants and the like. The transformation from carriage shop to show-stopping contemporary quarters began in 1996 and, under the exacting eye of architect John Wettermark, took two years to complete.

Many of the striking features of the Gelfands’ interiors are reclaimed elements from the original building: 14-inch-by-14-inch beams were sent to a local mill to be stripped, cut and polished into wide-plank flooring and beadboard was used for cabinetry doors and 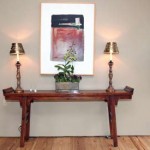 frontages. But the end result, as demonstrated in photos, is clearly a modern series of interconnected open, angular, loftlike rooms as filled with historical references as they are light.

The Gelfands’ personal penthouse has some 4,000 square feet of interior space within its two floors, the top of which is surrounded by some 3,000 square feet of outdoor space. “We wanted to bring the sense of being both in and out of doors,” explained Gail. “We wanted long vistas with interesting views.” And with terraces that wrap around 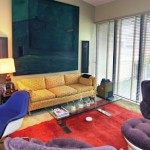 three-quarters of the condo’s fourth-floor living-dining-media room and office, they got it.

One enters on the fourth floor via elevator into a broad hallway flanked by a living room and media room. Connie Buckner was the interior designer and color specialist. “We got her in her fruit mode,” says Gail of the mélange of melon, mango and kiwi colors mixed in subtle variations, which along with floor-to-ceiling plus long, rectangular clerestory windows, impart a happy, light-saturated air. The walls are studded with paintings and constructions by 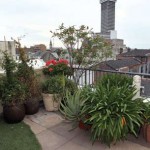 such artists as Richard Johnson, Lin Emery, Douglas Bourgeois and George Dunbar; a Mario Villa torso stands sentinel by a glass door that leads to the terrace. Outside, concrete decking and SYNlawn, the crème de la crème of artificial turf, are underfoot, while potted plants, art, fountains and statuary create places of respite, small grottos and visual punch to a terrace that never attempts to compete with the stunning views.

In the building’s lobby, the Gelfands’ hung multiple panels of drawings of old carriages on burlap. Within the Gelfands’ condo, a series of black-and-white photographs of jazz legends by Herman Leonard run the length of a hallway, linking the three bedrooms on the third floor, where the colors go to all variations of white, gray and taupe. In the 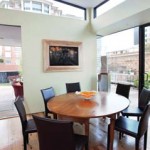 master bedroom, an antique country armoire, circa 1865, is a carryover from their former house. It faces a small, sleek 1950s chaise that has been covered in red leather, a traditional bed and a chandelier purchased from Stan Levy many, many years ago. Behind screen doors in the dressing room are cabinets and closets specially designed for the Gelfands. “I adored the screen porches at our house near Poplarville,” explained Gail, “and I wanted to translate that rough, textural feeling into something in the apartment. We found this very fine-gauge screening in San 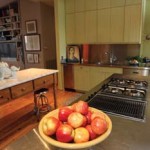 Francisco. I love the way it looks both modern but rustic at the same time.”

The reuse of wood and beadboard plus touches like screen-porch material are the perfect foil for industrial living so often the hallmark of loft living. They soften the design and breathe history and integrity into this Girod Street dwelling, giving both the old and the new a rich patina in a house lived large.