Breast cancer patients come from far and wide for the care and services of St. Charles Surgical Hospital

It may not be on the scale of an Ochsner or a Touro, but New Orleans has a brand-new hospital. With 17 beds, the St. Charles Surgical Hospital just opened in March on St. Charles Avenue. The facility is affiliated with the adjacent Center for Restorative Breast Surgery (CRBS) and dedicates itself exclusively to breast reconstruction surgeries, making it the first hospital of its kind in the United States … and the world. 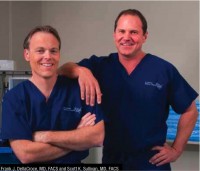 “You don’t normally think of New Orleans as a health-care mecca, but people are traveling for these operations. They’ve been coming from Boston, L.A., Seattle—from all over,” said Dr. Frank DellaCroce, a surgeon and co-director of the hospital. “It’s something for the city to be proud of.”

CRBS’s unique specialty is the reason patients have been seeking out the medical services of Dr. DellaCroce and his partner, Dr. Scott Sullivan. The surgeons focus exclusively on rebuilding breasts post-mastectomy, with living tissue taken from other parts of the body such as the stomach or the hips. In these “perforator flap” procedures, they reconnect the blood vessels, which allows the body to incorporate the transplanted tissue into the breast better than other techniques. After recovery, the breast’s size will fluctuate along with a woman’s normal weight fluctuations and frequently improve in shape over time.

Another pioneering technique developed by CRBS preserves the nipple, allowing for a more natural-looking reconstruction. In addition, CRBS has developed the ability to rebuild two breasts in one surgical session. At other medical facilities, such an outcome might require two surgeries that take place weeks or months apart, imposing extra expenses and recovery periods on the patient.

For some background, breast cancer patients generally have to choose from two overall procedures to remove tumors—a lumpectomy or a mastectomy. A lumpectomy entails the removal of a walnut- to lemon-size portion of the breast where the tumor is and then radiation treatment to stop the growth of any remaining cancer cells. Meanwhile, a mastectomy is the removal of the entire breast.

Not every woman is a candidate for a lumpectomy, but according to Dr. DellaCroce, treatment normally starts there, as this procedure preserves most of the breast. The disadvantage, however, is that radiation can shrink or deform the breast and also enters the chest cavity, reaching the heart and potentially causing side effects.

“Doctors involved in breast cancer treatments have been discussing how lumpectomies might be counterweighted by mastectomies, but mastectomies don’t really fly unless there are good reconstruction options,” comments Dr. DellaCroce. “Winds have been blowing toward greater acceptance of mastectomies, since breast reconstruction techniques have gotten better in the last decade.”

Dr. DellaCroce grew up in northern Louisiana while Dr. Sullivan is originally from Mandeville. They met at LSU where they completed their training and decided to open up a practice together. With its well-known reputation, streetcar line and easy access to New Orleans’ charms, a St. Charles Avenue location was chosen to appeal to out-of-town patients and their families. A medical facility had been under development since 2004, and the drywall had been installed when Hurricane Katrina almost blew away the plans.

“When the hurricane hit, we had to think long and hard about possibly setting up elsewhere,” recalls Dr. DellaCroce. “Since 60 percent of our patients come from out of state, we could be located just about anywhere that has good air connections and still be just as busy.”

But the doctors preferred to stay in New Orleans, and out of the crisis came an opportunity. The adjacent Bravo restaurant on St. Charles Avenue decided not to reopen after the storm, and CRBS expanded into it and became a full-fledged hospital—with a special appeal to women. The patient rooms are modeled after hotel rooms to avoid the clinical feel of most hospitals. Well-chosen, serene artwork hangs on the walls, spa services are available and a gourmet caterer prepares St. Charles Surgical Hospital’s daily meals.

Although luxury has its own appeal, such amenities at the hospital aren’t simply for the sake of comfort. The purpose is to create an atmosphere of hope and healing at a time when the women who come to CRBS find themselves in a mindset of worry and fear.

“When someone tells you that you have cancer, your life instantly changes. It’s a devastating moment,” says Dr. DellaCroce. “I get to come into that world and offer some positivity, some light. I get to relate the good news to women who are in a dark place that they can recover from breast cancer and still look fantastic.”