Typically, one thinks of dairy farmers as getting to work at the crack of dawn, and Jeff Kleinpeter doesn’t break from the stereotype. “I get to the dairy at 5:15 every morning,” says the president and CEO of Kleinpeter Farms Dairy. Still, he kicks off a little earlier than most workers–at about 3 or 4 in the afternoon.

After going home and taking a nap, Kleinpeter and his wife tend to take part in a variety of charitable functions or community events. The dairy contributes to more than 300 charities, and one cause dear to Kleinpeter’s heart is feeding the hungry. Kleinpeter has his drivers pick up post- dated milk from grocery stores, gives the stores full credit and has milk distributed to food banks. He’s on the board of many Baton Rouge food banks and is involved in New Orleans anti-hunger organizations as well.

Started in Baton Rouge in the early 1900s, Kleinpeter Dairy only began delivering milk to the New Orleans market relatively recently, some 15 years ago. Baton Rouge is still Kleinpeter Dairy’s biggest market, but New Orleans has been closing in fast, especially after the company launched an ice cream line last year. The dairy is now considered a local one for New Orleans, but Kleinpeter recalls original New Orleans brands— names like Brown’s Velvet, Barbe, and Walker-Roemer—that have been absorbed by Dean Foods, the largest dairy in the United States.

“When those other dairies left, it gave us a chance to move in. It’s kind of frightening when you’re a small fish in a big pond. You hope they never try to eat you,” he jokes. The Baton Rouge dairy, however, was able to avoid the fate of its New Orleans counterparts when Kleinpeter’s father bought out family members in 1987, and the company reverted back to one owner. When other family-based businesses pass through the generations, ownership can grow tangled among various siblings and cousins and leave the companies vulnerable to acquisition.

Jeff Kleinpeter is currently the fourth generation to run Kleinpeter Dairy, and a fifth generation is on its way up. The family claims a long history of agricultural innovation, being the first in the state to own a steam- powered cotton gin, for example. In 1913, the Kleinpeters switched their focus to dairy. Baton Rouge was growing, and Americans everywhere were getting rid of the backyard cows on a rope that provided them with milk and butter. At the same time, corner stores that started to pop up were seeking out dairy product suppliers.

“Being a private company, we keep our sales figures close to the vest, but I can say we’ve enjoyed a 15 to 20 percent growth rate every year since 1913,” says Kleinpeter. 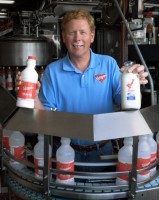 In the 21st-century marketplace, the dairy doesn’t try to compete on price. While the bigger players aggressively seek out cost-saving measures (as tends to happen in any industry), Kleinpeter Dairy focuses on quality and corporate values. Its herd is the only one in Louisiana certified by the American Humane Association, and it refuses to inject cows with rBGH–a commonly used synthetic drug that encourages animals to eat more and thus produce more milk. Some health advocates worry about the effects of rBGH on humans, and the drug has been banned in Canada and Europe. Because of his dairy’s farming practices, Jeff Kleinpeter claims it creates a product that is healthier and tastes better than other brands.

Meanwhile, Kleinpeter Dairy is well positioned to benefit from eating-local trends; Louisianians and other Americans have been turning toward locally sourced products to support their communities economically, celebrate regional uniqueness and reduce the carbon footprint of the foods they eat. “We’ve always promoted the local aspect of our business, but I’ve never seen communities more sensitive to it than they are now,” Kleinpeter comments.

In addition to purchasing milk from smaller dairy farms—all of which adhere to Kleinpeter’s rigorous practices—to shore up its own supply, Kleinpeter Dairy has forged partnerships with many other Louisiana companies for its ice cream flavors. Aunt Sally’s provides the defining ingredient for Pralines & Cream, Elmer’s Candy for Gold Brick, Bruce Foods of New Iberia for Sweet Potato Pie, Community Coffee for Café au Lait and Bergeron Pecan Co. for Butter Pecan. Naturally, Kleinpeter’s Strawberry ice cream uses Ponchatoula strawberries, and almost all flavors are sweetened with Louisiana cane sugar. Hubig’s Pie, Bananas Foster, and Ruston peach flavors are in the works.

Another part of Jeff Kleinpeter’s local touch is staying accessible to his customers. He wants to know what people are thinking and saying about his company’s products; he doesn’t want to become yet another corporate president stuck in an office bubble of meetings and documents. If you go to the dairy’s Web site (www.kleinpeterdairy.com) and e-mail a question or comment, Jeff will be the one writing you back.

1.18K
previous The Cat's Meow
next A Culinary Ambassador