Not surprisingly, the heart and hub of his home is its kitchen

If a man’s home is his castle and his family has been associated with fine dining in New Orleans for generations, then you can bet he has one heck of a kitchen. 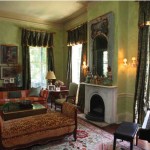 To say Dickie Brennan, who cut his teeth at Commander’s Palace and currently owns Palace Café, Dickie Brennan’s Steakhouse and Bourbon House, has a nice kitchen is a downright understatement.

There are 11-foot ceilings; cabinetry produced from pickle barrels made to look like armoires and linen presses; masses of storage; commercial appliances, including a treasured Wolf salamander; a computer station; copperware that hangs from the ceiling; and vintage pots, baskets and crockery put to various uses. This was meant to be a working kitchen not a showplace.

“We cook,” says Dickie, whose vertical tasting of cabernet sauvignons paired with beef from his steakhouse will be a highlight of the 20th New Orleans Food and Wine Experience event later this month. “My wife, Leslie, who co-authored the Palace Café Cookbook, cooks. Both of our teenagers cook. Our friends, their friends and all the other members of the Brennan family cook. So we knew this kitchen would become the hub of the house. What we didn’t know was that we would practically live in it!”

Dickie and Leslie designed the basic layout of the kitchen and its adjoining den/great room/breakfast room. They ripped out a butler’s pantry, opened the space, dropped the ceiling a couple of feet to accommodate air- conditioning ductwork and installed a large island within reach of the massive oven, grill and multiple burners. At one end of the island an old window was reconfigured to hold wine (the rest gets stored at one of Dickie’s three restaurants).

The remaining ground floor of the house, built in the 1850s, was restored, as much as possible, to its original splendor. “I was pregnant when we looked at this house,” explains Leslie. “We loved it, but it was going to need a lot of work; also there were a lot of people interested in it. The seller was odd about who she would sell to. So one day we got a call and she said, ‘I want you all to have this house.’ It was amazing. We bought it in 1993 and spent a year renovating it; Dickie stripped the mantelpiece in the dining room back to its original slate himself.” 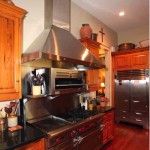 Leslie worked with decorator Jeanne Barousse, a friend and sorority sister. “I love green. I think it’s soothing, renewing and elegant,” says Leslie of the faux finish walls in the living and dining room.” The treatment shows to full advantage the furnishings, appointments and full-length portraits of the couple’s children when they were younger. The antique dining table seats 16, massive silver serving pieces sit side by side with smaller more delicate flatware. Adorning the living room are a painting and mirror that were spotted by Dickie in the back of a shop in Paris; other pieces were found at auction and at many antique shops on Magazine and Royal streets.

While the house isn’t large, it is gracious and grand … and it’s heart is a kitchen that welcomes and embraces all who come through it.

1.71K
previous Loft Life
next Belle of the Ball