In the 1961 cult western One-Eyed Jacks, Marlon Brando saunters into a saloon in the dusty town of Sonora, Mexico. With sun-bronzed skin, slicked back hair, holster slung low, he surveys the place with a slow sweep of the head and a keen eye on the denizens. “You know that’s the movie I was named after,” Rio Hackford, owner of the rock ’n’ roll bar and live-music venue One Eyed Jacks, tells me. “Brando’s character is Rio the Kid. It’s one of my dad’s favorite movies.” With a lean frame, purposeful swagger and affinity for Mexican culture, Hackford is a bit Brando-cowboy. 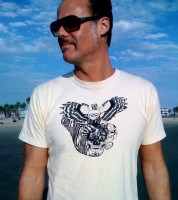 Son of producer-director Taylor Hackford (Ray, The Devil’s Advocate), Rio spent his formative years traveling the world (New York, bullfights in Tijuana, a year in Spain) and in the company of some very talented musicians before settling in New Orleans, hanging with creative types, falling for a woman (enough in itself to reel him in) and embedding himself in the local underground music scene. “Music is my first love—it’s always been in my blood,” he says.

In April 2002, Hackford and Ryan Hesseling, along with general manger Cory Allen, founded One Eyed Jacks. The seductive red, black and gold decor echoes Mexican saloons and bordellos: velvet-flocked damask wallpaper, black-velvet paintings of half-clad senoritas and matadors, votives, mirrors, a giant chandelier. A horseshoe-shaped bar dominates the main room and a heavily draped stage evokes the Toulouse Theatre that was housed in the building so long ago. Tucked in a cozy corner above a padded booth hangs a framed One-Eyed Jacks movie poster.

Bohemian hipsters, artists and rockers flock to the music club seeking alternative rock and underground theater. A popular hangout for famous musicians and actors, One Eyed Jacks is—as was its predecessor El Matador to which it’s inextricably linked—a pillar in the rock music scene.

Hackford, whose résumé includes stints as an actor and music video director, also owns Mid-City bar Pal’s Lounge with Linda Novak and Suzanne Accorsi (he also owns the Homestead bar in San Francisco). These days Hackford splits his time between Los Angeles, San Francisco and New Orleans. I caught up with him last month as he was gearing up for an anniversary celebration.

Did you grow up in Los Angeles?

I was born in L.A. My mother was in New York; my father was in L.A. But my dad always had a New Orleans connection, so ever since I was a kid I was coming here.

In what way were you most impacted by music early on?

I was always around music growing up. My dad was always going to shows in Los Angeles and took me everywhere. When I was in high school, he was making the movie Chuck Berry Hail! Hail! Rock ’n’ Roll, and all those interviews that were in that flick were shot at my house. So coming home from school [I would see] Chuck Berry, Bo Diddley, Little Richard, Keith Richards, Willie Dixon, Bruce Springsteen. It was the coolest thing.

What was your motivation for moving to New Orleans?

Henry Griffith, a local filmmaker, made a short film in New Orleans 10 and a half years ago called Mutiny that was loosely based on the Klezmer All-Stars. I came out to act in it.

El Matador happened about five or six months after that. The Mint [a onetime gay bar across from Checkpoint Charlie] on Esplanade and Decatur was about to lose its license and I was brought in [by my dad who owned the building] to save the license and open up a bar. Once it kicked into gear, it was so good I didn’t want to leave.

The first Saturday of Jazz Fest 10 years ago was the opening of El Matador. And the first Saturday of Jazz Fest this year I got Terry Reid, who’s a total idol of mine, to play at One Eyed Jacks. He’s the guy who originally turned down Jimmy Page [when] asked to sing in Led Zeppelin. He was doing his own thing at the time opening up for the Rolling Stones, and said, ‘No, I can’t, but go check out my pals [Robert Plant and John Bonham].’ Unfortunately that’s what he’s most known for.

El Matador was hugely popular. What contributed to its success?

El Matador was definitely a special moment in time. A rock ’n’ roll bar [in that area] didn’t really exist at the time. Its success had a lot to do with the [varied musicians] I have met along the way and who would come and see me there, like Pepper Keenen [Corrosion of Conformity and Down], Sean Yseult [Rock City Morgue, White Zombie], Chris Lee [Supagroup], Alex McMurray [Tin Men, Royal Fingerbowl], Chris Lane and Ben Ellman [Galactic].

And once we started having live music, it became the heartbeat of the rock ’n’ roll scene in New Orleans. All those bands—Supagroup, Rock City Morgue, Morning 40 Federation, New Orleans Bingo! Show—that have subsequently become the premiere bands in New Orleans all cut their teeth there. Plus, being an outsider coming in and being able to survive in a “locals” town was due to the fact that people like Quintron and Jay Poggi of the [Ninth Ward] underground music scene embraced me. That was the real reason why it flourished.

The Shim Sham Club became available, you moved everything over from El Matador and transformed the bigger space into One Eyed Jacks. What was your vision for the new club?

I didn’t want to give up what El Matador had started. The Shim Sham had been closed for about a year and the owner came to me and asked if I wanted to take it over. All those bands that played El Matador moved over to One Eyed Jacks and now instead of playing to 150 to 200 people, they’re playing to 500 or 600. There’s still a little bit of that intimacy; you can go see a show, or get a late-night cocktail [at the small front bar] and jam to the jukebox all night. There’s the El Matador tribute room upstairs as well; El Matador is still alive here.

I appreciate jazz as the heritage and history of New Orleans, but One Eyed Jacks first and foremost is a rock ’n’ roll club. But we leave the door open for everyone. With the burlesque shows and other jazz stuff that we offer, showing movies and the ’80s dance night, there is a variety; it does have something for everybody.

What is it about the city that keeps you rooted here?

My friends and just the general vibe of New Orleans—the music, the people, the musicians, the artists, that’s what keeps me coming back. If I’m in L.A. for too long, the L.A. vibe kills me. So I jump on a plane, come back here and “rejuvenize.”

Quintron and Miss Pussycat—“Original, wild, awesome. There’s nothing that comes close to what they do, anywhere.”

Queens of the Stone Age—“Josh Homme is a genius.”

Supagroup—“I love AC/DC, and they are as close as it gets.”

Terry Reid—“His music completely inspires me. If you haven’t heard his stuff, look it up. It’s heartbreakingly great.”

Curtis Mayfield—“There’s No Place Like America Today is in my top five records of all time. Without Curtis Mayfield there would be no Prince, no Michael Jackson. He blows my mind every time I listen to him.”