A Life in the Kitchen

Cooking since he was a teenager, Gus Martin now uses his expertise at Muriel’s Jackson Square

At 14 years old, when most boys his age were preoccupied with batting home runs or popping wheelies, Gus Martin was busy working at Commander’s Palace taking his first steps down what would become a long and successful career path. The New Orleans native spent many childhood days watching his mother and grandmother prepare dish after dish of classic Cajun and Creole cuisine. Not one to shy away from exploring new flavors (“I ate almost anything except calf liver” he quips), Martin developed a passion for food during family gatherings where delicious cuisine always took center stage. “When I was young, we had wonderful family functions. My extended family lived in the country, so everyone would bring their own special versions of rustic dishes like braised beef, gumbo, jambalaya and étouffée. Just good Louisiana home-style cooking.”

Over the past 25 years, Martin has worked in some of the top kitchens in town, including Mr. B’s, Palace Café, Dickie Brennan’s Steakhouse and Ralph’s on the Park. He currently holds the position of executive chef at Muriel’s Jackson Square. New Orleans Living had a chance to chat with the seasoned veteran about his illustrious career and his passion for classic local cuisine. 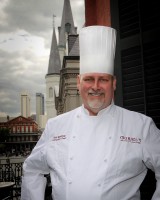 Who are your culinary mentors?

I worked at Mr. B’s for years with Gerard Maras, who showed me classical French techniques. He was a great teacher. Also, Jimmy Smith was a terrific Creole chef who used to make the soups and sauces at Mr. B’s. Chef Jamie Shannon was a good friend, as well as a great chef who showed me how to have fun with food. Jamie also taught me how to mentor young people. Dickie Brennan had a role in maturing me as a chef, and he helped me to become an authority on food.

How would you best describe your style of cuisine?

At Muriel’s we serve what I would call contemporary Creole New Orleans cuisine. I like to cook food that comes from the heart and touches the soul.

What is your greatest culinary challenge?

Teaching others. I try to teach young people to be consistent and hope that they will be influenced by my passion and love of food.

What is your favorite ingredient to work with and why?

I am a mushroom freak! I like the earthiness and the different flavor contrast. They can be used in so many dishes and with numerous cooking techniques.

If you could have only one kitchen tool, what would it be and why?

I have to have a cast iron skillet!

If you could cook for anyone, dead or alive, who would it be and why?

I have already cooked for the Rolling Stones and Barbara Bush. However, cooking for Metallica would be a great experience.

What is your ideal meal?

Bring me a 24-ounce Porterhouse steak with a double order of barbecue shrimp on top, served with a bottle of wine … and good friends.

What is your favorite cookbook?

I like Roger Verges’ Vegetables in the French Style. Also Jacques Pepin and Charlie Palmer are other favorite cookbook authors of mine.

What is the most gratifying aspect of being a chef?

I really enjoy making our guests happy by giving them the total dining experience. On the other end of the spectrum, I like to see new, talented cooks grow in the business and become chefs. It is truly gratifying to see other cooks realize their dream of becoming a chef and knowing that I had a part in their development.

What bit of advice would you offer aspiring chefs?

Read. Be picky and try to work in the best restaurants possible. Do not cut corners no matter how busy it gets. Try to stick with a restaurant until you learn everything you can. It’s not necessary to jump around every year to learn something new. I learned every day for ten years while working at Mr. B’s.

304
previous This Spud’s for You
next The Lunch Bunch