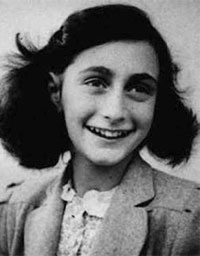 Anne Frank: A History for Today, the featured exhibit currently running at the National World War II Museum, holds lessons from which all citizens, and even world leaders, can draw inspiration. One young girl’s diary concerns not only the thoughts and details of an adolescent growing up in troubled times, but it also opens a window to a world where government policies of racist hatred brought fear and terror to an innocent life that had previously been normal and should have remained so. John F. Kennedy, Nelson Mandela, and Václav Havel all spoke movingly of Anne’s diary in addressing the oppressive regimes of their times, and the exhibit ultimately correlates Anne’s experiences with those of our modern times.

Pictures and descriptions of the events and times surrounding Anne Frank contrast her tragically short life with the coming shadow of the Nazi party. Anne was born into a Jewish family in Frankfurt, Germany, in 1929, but in January 1933 the fascist Nazi party came to power and soon began implementing its violently anti-Semitic program. By the following summer, Anne’s father, Otto Frank, decided to move his family to Amsterdam where he had business contacts. In her first few years there, Anne grew up as a normal girl, with her father; her mother, Edith; and her sister Margot. Like other kids, she enjoyed the usual activities of a happy childhood, such as school where her favorite subject was history. The stories of Anne Frank and the Nazis merged when Germany invaded Holland on May 10, 1940. When Margot received orders from the new Nazi authorities to report for deportation, or “work abroad”—which was nothing more than a deceptive euphemism for being arrested and transferred to a labor camp—the very next day, July 6, 1942, the family went into hiding in a nearly undetectable and ingenious location—the upstairs portion of Otto’s office building, behind a sliding bookcase that one day would become known as the Secret Annex. Just before that, her mother had given Anne a seemingly innocuous gift for her thirteenth birthday—a diary. That diary, translated into 100 languages, would one day provide inspiration to readers worldwide.

While in seclusion for more than two years, Anne filled her diary with all her hopes, fears and feelings about her life and world events, sometimes reflecting the typical trials of a girl growing up but at other times demonstrating an emotional depth and empathy beyond her years, and in the course leaving an astoundingly sincere, poignant reflection into the human soul in the most desperate and terrifying circumstances. The Franks stayed in their Secret Annex until August 1944, when someone—who remains unknown to this day—betrayed them and their location to the police. The Franks, along with another family and one other man hiding with them, were arrested and sent to Auschwitz. About a month afterward, Anne and Margot were separated from their parents and transferred to Bergen-Belsen. Amazingly, Otto would be the family’s only survivor; he miraculously lived to see Auschwitz liberated, while his daughters and wife did not endure the brutality. Anne and Margot died of typhus, hunger, exposure and maltreatment within days of each other, merely a month after their father was freed, and just one month before the British liberated Bergen-Belsen.

The exhibit ties Anne’s life to pictures and stories about others whom the Nazis persecuted, including Gypsies, the handicapped and African immigrants. At its end, the exhibit demonstrates how racial intolerance persists to this day, and includes visual examples of neo-Nazi or ultranationalist groups holding rallies and concerts. In recent years, the world has seen several incidences of ethnic cleansing and genocide, in Bosnia, Croatia, and Kosovo (NATO finally responded to worldwide cries to halt Kosovo’s crisis in 1999), in Rwanda (where the UN and NATO did not intervene despite approximately 800,000 persons having died in 100 days of ethnic-based fighting) and, today, in Darfur, Sudan and the Sunni-Shiite conflict in Iraq. All of these mass killings have been rooted in ethnicity or religion, and the exhibit ultimately suggests that it is up to every human being and government to realize that differences in religion and ethnicity are not reasons for discrimination, but reasons for celebration and a means for advancement.

Anne Frank: A History for Today reveals the unique and individual perspective of a girl who was discriminated against, terrorized and ultimately killed by a political party that was built upon the false concept of “race.” She maintained her ultimate humanity and decency throughout. On the surface, Anne Frank was a normal girl whose life was usurped twice because of racist hatred—first when she was forced to leave Frankfurt and again when she went into hiding—and yet underneath was so extraordinary she could still muster the inner compassion to write this for future generations: “It’s really a wonder that I haven’t dropped all of my ideals, because they seem so absurd and impossible to carry out. Yet I keep them, because in spite of everything I still believe that people are really good at heart.”

403
previous Air Jordan
next Do the 2