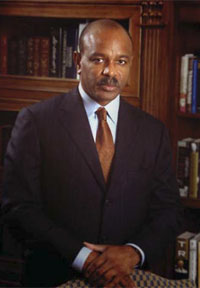 It’s safe to say that no district attorney in history has had to deal with the enormous obstacles that have faced Orleans Parish District Attorney Eddie Jordan Jr. Hurricane Katrina made a mess of everything in the city and the DA’s office was no exception. It faced a shortage of manpower, evidence files that were underwater at the courthouse, and witnesses and defendants who had become part of the post-storm diaspora.

In the time since, Jordan has worked tirelessly to bring his office up to speed. A New Orleans native, he graduated from St. Augustine and attended Wesleyan University in Connecticut. He then read law at Rutgers before becoming a clerk for Judge Clifford Scott Greene in Philadelphia. He returned to Louisiana and worked as an assistant U.S. attorney, focusing on narcotics prosecution, and then went into private practice.

Jordan agreed to talk to New Orleans Living and answer questions about the functions of his office, its progress and its goals for the city.

How does a criminal case develop?

First, the police conduct a crime investigation, but before making an arrest, they need probable cause. Afterwards, we need a police report with witness statements and forensics—such as DNA, fingerprints, lab report. What is very important is a complete report.

Before Katrina, things were improving. We had a 10-day turnaround in getting reports. The police are responsible for 97 to 98 percent of crime referrals. Civilians may report directly to us on economic crime.

What is an example of economic crime? Contractor fraud?

About the controversy regarding the Danziger 7 charges … isn’t first-degree murder supposed to be premeditated?

First-degree murder applies when aggravating factors are involved, not just pre-meditation. Or, it could be if the interest is to kill more than one person, or if it is done in the process of committing another crime, or if there are multiple victims. An example is the pizza kitchen murders from several years ago in the French Quarter. To take it further, the [Vince] Marinello case is second-degree. Thinking about it beforehand does not make it first-degree. The process is that murder cases are treated differently.

We meet with the detectives and determine if we can prove beyond a shadow of a doubt. Acceptance of the case is our opinion.

What about bond? People want to know why so many perpetrators go free on bond. What about the kid with 24 felony convictions who walked?

The DA’s office does not set bond. The court sets bond.
Is that the Eugene Tregg case?

The prosecutors will be there to tell the judge the surrounding factors. We refused the murder case but accepted the concealed weapon case. There should have been a bond setting at that time. He was allowed to use a bond on a case already dismissed. He walked subject to a bond on an earlier charge. There is still a warrant out for this guy.

What about the question that your office just goes after easy drug cases?
There has been the suggestion that we are only looking for airtight cases. We have to be able to say that we can carry our burden of proof—we have no problem with circumstantial evidence. That has come up. But we have to have enough evidence to prove. We make mistakes from time to time, but we do the job we are supposed to do under the law.
How can you improve the efficiency of the DA’s office?

We have worked with consultants to make improvements. There may be isolated incidents where we make a bad judgment call. If we screen a case and accept it, the case is ready for trial immediately. The longer it takes to get to court with pre-trial matters ….

What about dealing with the defense?

Some judges give more latitude to the defense counsel. Delaying a case can be a tactic. However, the majority of attorneys do not abuse the mechanism.
Are there any developments in the area of forensics, or a crime lab?

The lack of a crime lab has affected us. But we have agreed to allow field testing for evidence.

The proliferation of violent crime is a concern. It is a subject of discussion all over the city. What are your plans to stem it?

We now have a violent crime prosecution unit. One member is a former judge with 20 years’ experience as a prosecutor. The head of the unit has 15 to 20 years’.

Just how large is your total team?

We have a total of 86 attorneys. We need more.

Would you address your relationship with the NOPD?

We recently had a meeting with Chief Warren Riley. There is no enmity or friction between out departments. Many issues go back to structural problems. Neither of us wants anyone released because of incomplete reports. We agreed that we have a well-defined process.

How did you feel about getting sniped at the recent City Council meeting?

It was very tough, but it goes with the territory. Criticism should be fair.

What is your goal for the DA’s office?

To establish a level of understanding and cooperation with the NOPD and make it possible to bring to justice everyone responsible for bloodshed on our streets. We also want to apply the law in an evenhanded way—where politics and connections have no bearing. There will be no favoritism in our prosecutions.

What are your proudest moments as DA?

Convictions of people who killed police officers, and the [killer of the] Jazz Fest fan. I’m also pleased about the salary raises for prosecutors. It is now $45,000 and will be $50,000 by summer.

On a lighter note … what do you do in your free time?

I’m learning bass guitar, which I play with my old R&B stuff. I also like old movies and old TV [shows].

Do you have a family?

I have three children—18, 24 and 26. And I’m about to become a grandfather; I’m really excited about that.