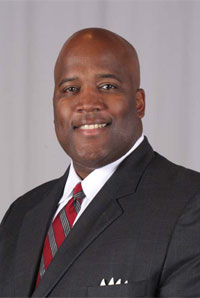 In April 2005, as director of Entergy’s New Orleans distribution operations, Roderick “Rod” K. West was participating in the company’s annual storm drills to practice protocol in an emergency situation when he was presented with what he then thought was an absurd hypothetical.

“When I turned the page, the scenario for the drill called for my colleagues and I to discuss how Entergy would respond to 20 feet of water in the city of New Orleans,” says West, who became the president and CEO of Entergy New Orleans in January 2007. “I stated that a helicopter should be sent so I could get my people out of there,” says West.

Yet as West and his mentor, former president and CEO Dan Packard, sat on the fourth floor of the Hyatt at the end of August 2005, sweating and thirsty in the middle of unrest, he recalled with a certain degree of levity that they had indeed drilled for this uncannily similar situation.

“It’s a radically different environment when you’re in the comfort of a controlled drill versus reality, where you look outside and see the water, the affected lives and the devastation,” says West. “I couldn’t get employees safely on the ground immediately because flood waters prevented us from accessing our facility.”

But by mid-September 2005, after utter destruction to its electrical distribution system, Entergy did indeed get the power rolling to the city again, thanks to the dedication of employees such as West. A native of Baton

Rouge who has lived in New Orleans most of his life, West graduated from Brother Martin High School and received a bachelor of arts degree from Notre Dame, where he played football. He graduated from Tulane University Law School and earned an MBA from Tulane University Freeman School of Business. He worked as an attorney at Jones, Walker, Waechter, Poitevent, Carrere and Denegre, LLP, in the general litigation section from 1993 to 1998, and for Vial, Hamilton, Koch and Knox, LLP, for a year before Entergy called in
1999. He joined Entergy as senior regulatory counsel, later becoming director of regulatory affairs.

West is enthusiastic in his focus as he settles into his new role, even if it means hunkering down in temporary offices while repairs are being made to the home facility of Entergy, which did not escape the wrath of Katrina. “With a little luck, we’ll be back by the end of the year,” smiles West, who says that Entergy’s goals are intrinsically linked with the goals of the city. “From a business perspective, this company is going to continue on the path of emergence from bankruptcy and migrate towards returning to an investment-grade entity,” says West, who feels Entergy New Orleans will be free from bankruptcy by the summer. Creating a business organization that better fits the needs of post-Katrina customers is key for Entergy. “There is 100 percent availability now to anyone who wants power in the city of New Orleans.”

West has come to grips with the fact that rebuilding New Orleans won’t be a quick process. “I, like everybody else, have no patience whatsoever for the rebuilding. I want it to happen tomorrow with my fellow citizens back home and my neighborhood rebuilt,” says West. “But I look back in history for context, and with the possible exception of the rebuilding of Europe post-World War II, there’s no point of reference for this level of devastation.”

With Katrina in the rearview mirror, West can’t state enough how proud he is of Entergy’s employees and their unflinching dedication, both during and after the storm. “It’s been said that electricity is the closest thing to magic there is,” says West. “When our customers flip that light switch, they expect the light to come on. And behind that light switch are men and women working magic around the clock to make sure electrons are flowing at that very instant. Bucket trucks, drills and machinery don’t provide and restore electricity— people do. Knowing their homes and lives were destroyed, our employees spent months working to bring power and hope to others. They are true unsung heroes.” By volunteering both their time and money to projects such as Habitat for Humanity and other relief organizations, Entergy’s employees continue to be active participants in the rebuilding of New Orleans. “It’s our responsibility to be good corporate citizens,” says West.

With his admirable credentials, West has had numerous opportunities to work in other cities, but West’s love for New Orleans keeps him and his family—wife Madeline and daughter Simone, 11, a student at Sacred Heart—here. “There is only one thing worse than being in the middle of the chaos, anguish and uncertainty on the rebuilding path here, and that’s to be somewhere else and feel helpless,” explains West. “I’d be absolutely miserable because my heart and soul are in this city. I believe we all aspire to be relevant in our lives, and I’m not sure I could find a more relevant role in terms of a purpose-driven life than being a part of the rebirth and renaissance of my hometown, one of America’s most prized possessions.”

1.93K
previous Many happy returns
next Recipe for Success