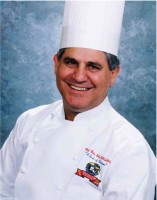 Chef John Folse’s flagship restaurant, Lafitte’s Landing, is located in the tiny town of Donaldsonville (population: 7,605), about an hour’s drive from both Baton Rouge and New Orleans. The restaurant doesn’t have difficulty attracting guests from Louisiana’s two largest cities, or

from places far beyond, but it wasn’t always that way. Folse remembers a time when his empty dining room pushed him to “chase Greyhounds up and down the highway.”

The restaurant opened in 1978 with elegantly prepared dishes of lamb and venison on the menu. Fine dining

“I followed the bus to one of the plantation houses. I pulled up to the driver and asked him where they were going to eat,” he recalls. “They were just going to get some sandwiches, but he could take them anywhere. ‘Will you give a free meal to the driver?’ he asked, and I said, ‘Absolutely.’”

With 80 seats in his restaurant and 50 seats on a tour bus, it was a great place to start. Folse went to New Orleans and visited tour companies, then moved on to hotels and convention organizers. Word of his wonderful restaurant got out, and his business started to grow impressively. It didn’t hurt that at the time, in the early ’80s, a Cajun and Creole craze was sweeping the country.

The success of Lafitte’s Landing led to a catering business, which led to international expansion, with Folse being invited to open restaurants and train chefs from Japan to Russia. These restaurants needed supplies, so Folse got into the manufacturing business for the food service industry, and that led to manufacturing for retail stores. As his fame spread, Folse landed a cooking show, A Taste of Louisiana, on Louisiana Public Broadcasting in 1990. To promote cookbooks, he started a publishing unit. Later came the dairy, the bakery and so on. After three decades, Chef John Folse & Co. now has eight divisions and 400 employees. Folse remains the sole owner.

Adding to the impressiveness of these accomplishments is the fact that Folse never received any formal business schooling. He attributes his skill as a businessman to core principles his father instilled in him as a child.

“He taught us to commit to a job, do quality work and be fair,” he says. “So if you tell bankers you’ll pay them for something, you do it. Choose good employees, give them the tools they need and share the results of the work through good salaries. Expect results; don’t let mediocrity run the day. Stick with what you know best and learn from your mistakes. It may seem a little too simple, but basic life skills are the same ones that create successful businesses.”

Even though he teaches at the culinary institute at Nicholls State named in his honor, Folse has never received any formal culinary training beyond apprenticeships. He happened to go to Nicholls State as an undergraduate, but financial difficulties forced him to drop out. The origins of Folse’s cooking skills and knowledge come from his hardscrabble upbringing in St. James Parish.

Folse’s father was a Cajun trapper and crabber. He even harvested moss to sell as mattress, pillow and car-seat stuffing. Folse’s maternal grandfather was a sugar and rice farmer, and the boy grew up on a West Indies–style plantation home called Cabanocey. Unfortunately, his mother died young, leaving behind a husband who never remarried and eight children ranging in ages from 10 to under a year. The entire Folse household had to join together as a team to keep the house going. And they all had to learn to cook.

“My father was an excellent cook. Being a trapper, he had to live alone in the swamps for long periods of time. He knew about hunting, harvesting raw ingredients, spices, seasonal foods,” Folse says. He also learned about his mother’s German-based traditions. “The Germans brought with them a tremendous knowledge of preparing meats and cheeses. They were great sausage makers, better than the French.” In addition, the Folse family hired an African-American woman named Mary Ferchaud to help out, and she introduced yet another style of cooking into the household.

“These days people think of it all as Louisiana cooking,” Folse says, “but it’s an advantage to know where the influences come from.”

None of Folse’s siblings went on to pursue careers as chefs, but they’re all excellent cooks, he says. For Folse, of course, food became the center point around which his life and business revolve.

“All of my company is food. It always comes back to that,” Folse explains. “I’m just lucky that my love of cooking has its foundation in Louisiana.”

296
previous Got (Local) Milk?
next Pick Your Poison