With Staten Island as the backdrop, noir thriller Fresh Kills delves into the psychology of abuse

Bill Loehfelm is a New Yorker turned New Orleanian and recent Tennessee Williams festival panelist. His novel Fresh Kills, albeit a gory title, is an intriguing recounting of the aftermath of a murder as seen through the eyes of the victim’s son. But who is the victim? The father was abusive. And now the grown man must come to terms with his own personal baggage. Opening with a murder, the book is considered a thriller and is quite raw at times, but it is also a portrayal of adult children of abusive fathers. It will be released in paperback next month. I wanted to know more about the author, so we chatted over coffee at CC’s on Magazine Street recently.

Tell me about you. How much of the main character, Junior, is you? 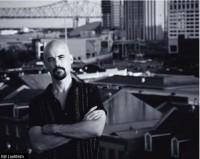 I was born in Brooklyn, moved to Staten Island around kindergarten age, and it was naturally all Staten Island’s fault that I was so miserable. Looking back, I realized I had a good childhood and made a lot of friends there. Very little of the character is me. I grew up in a normal, stable, chaotic household. We were four boys within 10 years of each other and both my parents worked—that kind of chaos. My childhood was nothing like his. We went to the same high school; I hung out at the mall. The abuse is all fiction.

Thank god. But the abuse and its aftermath ring so true. Where did you get it?

I thought about that. I didn’t want someone who had lived like him reading it and thinking this is all crap or exploitive. I felt I could understand the basic emotions: fear, terror, humiliation, distrust, disappointment, anger. I understood those emotions, and I used them. I call it emotional noir.

Powerful stuff. Fresh Kills subtly reveals a psychological study of adults who were abused as children.

Yeah, and different kinds of abuse, which causes different problems for the adults. It was tough to write. It takes place over four days, and each day things kind of get worse. [Laughs] This guy is having a bad time, and I am the one doing it to him.

The second book is a little more disturbing. It’s called Bloodroot. It’s a new story, new characters, but same general environment. It’s the story of two brothers; one is a heroin addict, both are making bad decisions. I have lost two close friends to heroin addiction. They’re not dead, but our friendships are over. They disappeared into this other world. That’s where I reached for this novel.

When I started it, I went looking for another Staten Island location I could use, like I used Fresh Kills, the Staten Island garbage dump. I decided to use the Willowbrook State School, which is an institution for severely disabled children. Geraldo Rivera did a big exposé on it and found the kids were living with no beds, no clothes and no food. It became a seminal moment in the treatment of institutionalized people. It changed the way state institutions were run all over the country. The most disturbing thing I found in my research was a collection of secret horrific photographs. They are archived by Syracuse University.

When and where does novel number two come out?

Bloodroot is going to be launched at the Garden District Bookshop around September 3. I have a whole crew of friends that are all writers that have gone through the University of New Orleans MFA program. Garden District has been really supportive, and it’s kind of a cool rite of passage for us to have our launch parties there.

I started Fresh Kills in June 2005. After the contract was signed for Fresh Kills, I was able to stop side jobs and just write. I had been working jobs like at Rocky’s Pizza, and then Lucy’s until a year ago. Sometimes I miss it. I miss the people … and the action. Sometimes around 10, 11, you’re rolling, the place is packed, everyone’s having a good time. It’s good.

But now I write a lot, spend time with my wife—she teaches at Tulane and is a great writer—and play with my two dogs. But I spend about as much time writing as I did behind the bar. It’s what I love to do. It’s the best feeling in the world when you love your work.

Can you verbalize what you are trying to accomplish?

That’s a tough question. I guess it’s an exploration of things that are important and interesting to me, like family and loyalty. What are the rules, what are the limits … what do you forgive? Is there anything you don’t forgive?

You wake up one day and your life is different than it was when you went to sleep. Life events like Katrina, 9/11, a family member dies. Both books are kind of about that; people being tested. I try to question how you are living, “good” or “bad,” and whether you are going to protect that lifestyle or change it.

How do you come up with your plots?

For me, it’s characters first. You create your people and then the story grows out of that. Sometimes you have to abandon your ideas about the plot because the character wouldn’t have done that.

As moving as some scenes are, Fresh Kills was pretty raw. The main character couldn’t do anything without taking a drink and smoking a cigarette first. And the language …

Someone counted how many times I used the F-word. Hey, it rings true. That’s how people talk there. Someone from Kansas wrote to me and said people don’t talk like that. Well, they do in New York. But the very first letter I received was from a guy in the military who had grown up like Junior. He wrote, “You put into words so many things I never could. I am going to have my wife read the book and for the first time we are going to be able to talk about things we never talked about.” After that, it’s all gravy.

Bill Loehfelm has lived in New Orleans for twelve years. He speaks highly of the University of New Orleans and his posse of writers, whom he met, along with his wife, in the MFA program there.