Hello, Buttercups! I hope you had a wonderful Mardi Gras season and took part in the pleasures of the Carnival balls, parades, costumes, great weather and parties galore (check out the photos). 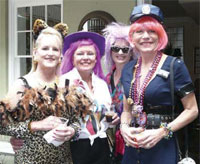 Now the Ides of March is approaching and will quickly be followed by the sounds of the Irish jig and those St. Patrick’s Day paraders trading flowers for kisses. Watch out!

Tarragona, Spain, for a two-month exhibition during the 11th International Dixieland Festival. The theme is the cultural identity of New Orleans before and after Hurricane Katrina and what it means to live in New Orleans. The work is to show as broad and accurate a portrait of the city as possible, meaning that the photographers ventured beyond the tourist façade most visitors see. Plans are coming together to tour the exhibition throughout Europe this year, with an ensuing tour in the United States in 2008. 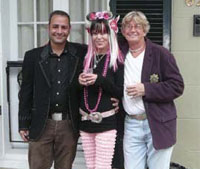 Don’t forget Lark in the Park on March 23. For tickets, call 483-9376. Thank you, sponsors: Capitol One, Schlumberger and Republic Beverage Company.

For a rare treat, catch Greg Bossí on guitar at La Thai Cuisine on Metairie Road Friday and Saturday nights. By the way Merlin’s special crab cakes there are divine.

I hope you enjoy the Mardi Gras photos. Until next time, au revoir!