Saints linebacker Scott Fujita has it all: a football career, a wife and two kids and a city that loves him

Saints fans have gotten used to seeing the ever-reliable Scott Fujita playing linebacker in the Superdome, but if you live or work downtown,

you’re also used to seeing this towering, 250-pound man walking his two little floppy-eared dogs (a beagle and a spaniel) near his Warehouse District condo. “They’re local celebrities around here,” he says. “Everybody knows KC and Ellie.”

During the spring months, Fujita and his family regularly walk over to the weekly Wednesday concerts in Lafayette Square. Or Fujita can be spotted around the corner at Rock-n- Sake, where he might be filming the latest “Who Dat Fish?”—a segment on WDSU in which he and the chef invent Saints player–inspired sushi rolls and raise money for charity.

As should be apparent, Fujita believes there’s more to life than being a dedicated, hard-training football player. “I do Jazz Fest, French Quarter Fest, Mardi Gras. I go to the Museum of Art … I do it all,” he says, noting that it is important to him to play football in a city he enjoys. “I love New Orleans, and I love the locals. Some people who don’t get it ask why my wife and I wanted to come here, but there’s no other place I’d rather be right now.”

Fujita and his wife, Jaclyn, have twin girls who are a year and a half old, and even though they’re still quite young, he enjoys exposing them to the culture of the city. Fujita is also happy his daughters were born in New Orleans, as it gives them a story to tell for the rest of their lives.

“Twins are a lot of work. Thankfully, they sleep well at night, but during the day, it’s all hands on deck,” he laughs. “But we have so much fun. It’s funny to watch them try to wake each other up and see how they’re fast becoming friends.” The girls are fraternal twins, quite different both in looks (one blond, one brunette) and personality.

Having a job as an NFL player can be great for fatherhood. During the off-season, Fujita has a lot of free time to spend with his family. But training camp is the opposite. Even when it’s held in Metairie like it is this year, players are sequestered away from the world for a month at a time; Fujita might find a moment for a quick call home each night. This year will be particularly difficult, he says, as it will be the first time his daughters will be aware that he’s away. 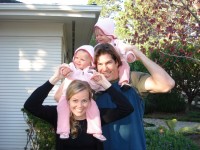 But that’s not until later this summer. On Father’s Day, he’ll be in Northern California where he and Jaclyn own a home. Their property opens onto miles of trails, and Fujita says his perfect Father’s Day will be putting the girls in backpacks and going on a hike that ends up at the beach.

Fujita grew up in California and spent his childhood in Ventura County, about an hour outside Los Angeles. Despite his affinity for New Orleans, he still considers California his home and plans to end up there one day for good. A fair number of Asian-Americans live in the state, and if “Fujita” sounds like a Japanese last name, that’s because it is. Scott Fujita was adopted at six weeks of age by a Japanese-American father and a Caucasian mother. He and his brother, also adopted, grew up eating with chopsticks and celebrating important Japanese holidays, although they never learned much of the language.

Because of his heritage, Fujita is quite aware of the history of the Japanese in America. When the U.S. and Japan went to war after the bombing of Pearl Harbor, more than 100,000 American citizens of Japanese ancestry and Japanese nationals living in the U.S. were rounded up and imprisoned in internment camps without due process. Among those interred were Fujita’s grandparents; Fujita’s father was born in a camp.

“I never saw any resentment from my family members who experienced the camps, but I personally get angered by this chapter in our history,” Fujita says. “I could never comprehend the injustice of it all. It mostly bothered me that it wasn’t talked about in school. If I didn’t know about it from hearing firsthand accounts, I might have never known about it at all. In the wake of 9/11, I saw the same type of paranoia and fear that led to the rounding up of the Japanese and was very suspicious of it.”

Fujita acknowledges that this chapter in his family’s history and his country’s may have influenced his decision to major in political science at the University of California, Berkeley—arguably the most politically charged campus in the country. But wanting to cover his bases, Fujita also minored in business and earned a Master’s in education.

While pursuing this heavy course load, Fujita shouldered his way onto the university’s football team. He had played defensive back in high school but had never really thought of football as a career. Certainly no college recruiters ever visited his high school to check him out. But he proved good enough to get on the Berkeley team as a walk-on and later earned a full scholarship, which relieved a heavy financial burden from him and his family.

Also while in college, he and his wife married. “We were a good 10 years ahead of our friends,” he jokes.

Upon graduation, in 2002, Fujita was drafted in the fifth round for the Kansas City Chiefs. The newlyweds piled their belongings into their car and drove from California across the vast, desolate Great Plains under threatening skies. “I remember thinking, ‘What have we gotten ourselves into?’ But it turned out fine in the end,” he says. A linebacker coach saw something promising in the young man and let him play. Fujita spent three years with the Chiefs, was traded to the Dallas Cowboys for his fourth season and then became a free agent and joined the Saints in 2006.

“I was proud to be the first free-agent signing of the Sean Peyton era. I’d worked with some of the coaches on the Saints already and loved the city, so it was a good fit career-wise,” he says.

Unlike the quarterback or running back, the linebacker position doesn’t attract great glory in football, but Fujita doesn’t mind being out of the center spotlight. “Right now, I feel everything is team oriented. It’s not like in high school where you have the big guys on campus,” he remarks. “So when the team does well, everyone feels good about. That’s especially true in New Orleans. If you play hard for the fans of New Orleans, they’ll love you for it.” And that’s another reason he likes to go out and about in the city. When he meets Saints fans face to face, it makes him want to do well for them.

As someone who was accepted onto his college football team only after he was enrolled as a student, Fujita 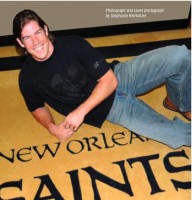 has cultivated other interests as well. While some players may have had the luxury of focusing on football full time, Fujita worked hard at academics, enjoyed extracurricular activities and took care of all the little things in life. He says he always had to put in more time and more work than other guys. Perhaps that’s why he’s gained the reputation of being such a consistent, reliable player.

Since Fujita is the type of person who takes nothing for granted, he’s keenly aware that one day his football career will come to a close. “I’m 30, which to a lot of people is getting old in this sport. And I’m on my eighth season. The average number of years for an NFL player is three,” he says. At a time when he didn’t know if his football career would take off, he considered going to law school; that possibility is still on the table post-Saints. Or he might teach. After all, Fujita earned a master’s in education, and he is pretty sure he’d be good at teaching.

In the meantime, of course, Fujita is sticking with the Saints. “I’m going to keep playing football for as long as I can,” he says.

Fujita on Fujita: A Lifetime of Highlights

Scott Fujita has amassed a number of career highlights during his tenure with the NFL. He led his team in tackles for four seasons, including each of the last two seasons with the Saints. And Saints fans certainly remember the 2008 opener against the Tampa Bay Buccaneers when Fujita made that last-minute interception near the Saints’ 20-yard line to seal the victory. But Fujita doesn’t mention any specific records or plays as his own football career highlights. These are his best moments so far, according to the man himself:

* Winning a full scholarship to Berkeley – Not only did the scholarship help out financially, it affirmed his hard work, talent and determination.

* Receiving praise from Marvcus Patton – At the end of Fujita’s rookie season with the Kansas City Chiefs, veteran linebacker Marvcus Patton pulled him aside and told Fujita he was proud of him.

* First post-Katrina game in New Orleans – Fujita describes the game where the Saints beat the Atlanta Falcons at the highly anticipated, energetic return to the Superdome as a “one-of-a-kind, life-changing experience.”

* Beating Philadelphia in the playoffs – After the Saints won against the Philadelphia Eagles in the 2007 playoffs, Fujita showered and changed. When he returned to the field 30 minutes later, fans still packed the stands with celebratory tears streaming down their faces.

434
previous Pick Your Poison
next Summer of Soccer