An eclectic spate of loyal fans gather at a Bywater gem called Vaughn’s. Beneath a ceiling strung with Mardi Gras garland and twinkling

lights, the crowd swells as the night grows, and when the house lights dim and the music starts, this quiet neighborhood bar is transformed into a jump jivin’ joint.

Kermit Ruffins, one of the city’s most treasured trumpeters, has performed at Vaughn’s every Thursday night for the past 15 years. On this evening, Ruffins shakes hands and laughs it up with patrons before the show, dancers boogie between bites of free red beans and rice, and Galactic drummer Stanton Moore turns up and sits in with the band for a couple of songs.

Well known for playing traditional jazz and R&B classics with a bebop twist, Ruffins is also famous for impromptu sidewalk barbecues, whipping up down-home fare on a portable grill attached to his mighty pickup truck.

Ruffins got his musical start playing for tips on French Quarter street corners with the Rebirth Brass Band, which he and fellow class and high school band mate Phil Frazier founded. In 1992, Ruffins went solo, combining his two loves to form his current band, the Barbecue Swingers.

Passionate when it comes to the culturally rich Treme neighborhood, Ruffins has made his home there. It’s no surprise then that he contributed to the upcoming David Simon HBO drama Treme, which will air in September and is based on the struggles of musicians in the aftermath of Hurricane Katrina. Ruffins also has a new album out, aptly titled Livin’ a Treme Life.

Not one to slow down, he performs five nights a week, manages his year-old club, Sidney’s Saloon, and on the heels of the French Quarter Fest and Jazz Fest musical marathons, is planning to do festivals in Europe. “Every day I wake up and can’t wait to get onstage,” Ruffins says. “So I can’t wait to travel more and bring it to the world.”

I had an opportunity to chat with Ruffins one morning following a big barbecue and baseball game. His typically raspy voice was even more hoarse than usual. “I think it’s from laughing too much,” he said.

You reunited with the Rebirth Brass Band during the first weekend of Jazz Fest and performed with the Barbecue Swingers for the second. Is performing with Rebirth something you do often?

A lot of times I get invited to play a show with them as a guest. Especially since [in 2005] I brought them in on my record Throwback. That kind of opened the door for me to do shows with Rebirth at any given time.

What was the highlight of Jazz Fest for you?

The highlight for me was playing at the new Rock ’n’ Bowl on the second Saturday night. I just love John Blancher and what he does. He hires so many musicians to play on a constant basis. I love what he did to [the new location], and he’s always got good entertainment.

Tell me about your new album, Living’ a Treme Life. 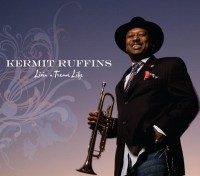 I am so excited about this one. I had Herlin Riley play with me, George Porter, Trombone Shorty, Rebirth, Bonerama [as well as a host of other local musicians, including David Torkanowsky, Carl LeBlanc, Dewon Scott, June Yamagishi, Eric Traub and Kevin Morris]. To have all those guys playing with me was amazing. I got a major acting role in the TV pilot Treme, which recently got accepted for a whole series. And I decided to do the record to go along with the series.

I’ve been hanging and living in the Treme since I left the Lower Ninth Ward in 1983. I just loved the culture, with the baby dolls on Mardi Gras, the skeletons on Mardi Gras, the brass bands, and the live entertainment at every corner every Friday and Saturday night. At 3 in the daytime on Sundays, there were R&B bands playing at five or six bars, and I would go to all of them. For a young kid just out of high school, I fell in love with Treme. And on this record I tried to bring all those years into it. From the tune “Red Dress, High Heeled Sneakers,” which was one of the first tunes I learned in the Treme with Tuba Fats, the Olympia Brass Band and the Treme Brass Band, along with Tuba Fats’ Chosen Few Brass Band to “I Can See Clearly Now the Rain Is Gone.” I was sitting in my house writing and on the TV was the Democratic National Convention and a lady was singing this song. I was looking out the back door, out onto the balcony at the background of the Treme neighborhood listening to that tune watching the DNC. So from “Red Dress” to my latest favorite, it’s all in that time frame.

Besides acting in the HBO pilot Treme, you were a consultant on the project.

It was so amazing to sit [with the] writers and tell them what I feel should happen. With a Bloody Mary in my hand, 10 in the morning [laughs] telling stories. Where they took the stories I don’t know yet because they haven’t mailed me the other eight scripts for the series.

You basically play yourself, and your name is Kermit on the show.

Yes, and they gave my wife a role, too, and used her nickname, Juicy. In one scene, she answers the door and I’m in the backyard barbecuing. In another scene, I’m playing a gig, talking to people on the sidewalk. It was so much fun. Almost like being in the studio doing takes of music.

With all that you do, of what are you most proud?

It all boils down to my family. My little three-year-old danced on stage the whole show at Jazz Fest, grabbed the microphone and sang two songs; my girl is graduating, going to Spellman; my other little girl is playing the piano and graduating next year; my wife is hanging in there with me through all the not-being-home-too-much and enjoying all this good fun with me. I am just so thankful for this lifetime. I wake up a lot of mornings with tears in my eyes, overjoyed about being able to do what I do and being able to take care of my family.

You’ve spent 25 years doing what you love, honoring your idols Louis Armstrong and Louis Prima. What else has influenced you?

When we started Rebirth, I was hooked on big bands: Count Basie, Cab Calloway, Duke Ellington. I was hooked on Lionel Hampton. I would go to Tower Video and rent or buy old black-and-white videos of those guys, and sit there with a 40-ounce of beer in hand almost every day of the week and watch those videos over and over. Next thing I knew I was on the road [with Rebirth] sitting next to Lionel Hampton. I sat next to Bill Cosby and watched Miles Davis’ whole show, after watching Miles on TV for years. Even down to Wynton Marsalis, who gets me up to New York at least once or twice a year to play after-parties following his shows, and who sat in with me for my record release party at House of Blues. What I love about Wynton is that every time I leave him, I’m so inspired. Like the cats I’d sit at the bar with [in the Treme, learning about music as a youngster], when you leave, you feel like you know the secret.

And I always tell people, if you want to know what made me, find the video [of the Universal short film from 1941] Jumpin’ Jive. I need to go on eBay and see if I can find it because I lost my copy. If anybody has it out there, please get me a copy of the video Jumpin’ Jive. If you find it and look at it, you’ll say this is where Kermit gets all his stuff.

Jeremy Davenport—My favorite entertainer, because I love a good trumpet player, singing all those classic tunes.

Trombone Shorty—He’s a young cat that’s really doing it, playing the trumpet and the trombone.

Tonia Powell—She sings her butt off at my bar Sidney’s Saloon (1200 St. Bernard Ave.) every Friday at 9 p.m.

Lisa Amos—Another great R&B singer; I love to go down to Perfect Fit Bar & Grill to see her.