With all these glorious eats, a trip to the beach may have to be put on the back burner

Forget bikini season! Go ahead and get a tummy-hiding one-piece miracle suit because there’s no way you’ll want to pass up the bounty of peaches, watermelon, tomatoes and seafood offerings this month. It’s June and with the warmer (shall we say “steamy”?) weather comes a host of spectacular fruits, festivals, fantastic lunch specials and far more new restaurants than anyone could have imagined.

On June 21, it’s time to celebrate Father’s Day and the beginning of summer. Stereotyping though it may be, Dads (actually most men in general) love barbecuing on the grill. Some great tools, tips, tricks and tasty items are available at Cost Plus World Market (my secret source for all sorts of great stuff) and the more-upmarket William-Sonoma. I’m also a fan of hitting the big-box home-improvement stores for serious “cue” tools. And if Dad prefers for someone else to get smoke in their eyes, hit the newest entry to the BBQ scene: Tastee Bones on Franklin and Claiborne. The perfumey, smoke-laced meats, creamy red beans, mustard-sharp potato salad and delectable spicy sauce (made in-house), will rock you and your dad’s world.

June also signals a change in restaurant menus. In keeping with the season, chefs shift gears, offering lighter fare to comport with the weather

and the available local products. Many white-tablecloth restaurants have ramped up lunch. Emeril’s now offers a “Lunch Crunch”—three courses for $19.50. Yes, $19.50 … at Emeril’s. And the food is glorious. Chef David Slater pulls out all the stops with dishes like “Fresh Bacon” (read: pork belly) braised in Abita Root Beer. Thickish slices of “bacon,” braised twice and seared to caramelize and enhance the sweetness of the root beer, are mouth-meltingly tender and succulent. They are plated atop vinegary purple cabbages and a smattering of finely diced vegetables, torn arugula and house-made cracklings. The dish is wildly evocative of Central American–style yuca con chicharrones—and perfect. There is also a pulled short-rib “melt” (homemade brioche topped with tender meat, fontina cheese and tangy house-cured pickles) and, just added to the menu, an old-school “Louie” salad of butter lettuce, seafood, hard-boiled eggs, tomato, cucumber and more with a Louie Dressing (more or less a Thousand Island–style dressing). Desserts are luscious: blueberry bread pudding with a sticky toffee sauce and homemade ice creams; a pecan pie tart; and fresh sorbets (if fig is offered, get it). The service is impeccable, the food outstanding. And did I mention the price? $19.50. And if you’re in a time crunch, they can get you fed in 30 minutes. Love it!

Over in Lakeview, the scene on Harrison Avenue has kicked into high gear at long last. We’re so happy to see this renaissance. What had been a barren strip is now a teeming corridor of delicious eats. Three new restaurants add to the scene: Tastee and McKenzie’s (901 Harrison Ave.), for a return of favorites like buttermilk drops, blackout cake and turtles; Creole Creamery, for genius ice creams, sodas and sundaes; and Madrid (300 Harrison Ave., 482-2757), for the excellently rendered Spanish dishes.

Toward the end of June, some of the most juicy and hunger-inducing festivals of the year will be upon us: Le Festival de Viande Boucanee (June 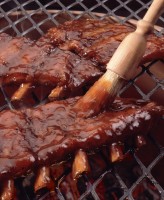 26 and 27; www.smokedmeatfestival.com), in Ville Platte, celebrates smoked meats with food booths, music, cooking demos and competitions; the Watermelon Festival (June 26–28; www.beauparish.org), in DeRidder, pays homage to one of our favorite summer fruits; and Ruston’s Louisiana Peach Festival (June 26–28; www.louisianapeachfestival.com) is a tribute to our gorgeous, intensely flavored native Louisiana peaches, of which there are only a couple commercial growers left.

Finally, let’s give a shout-out to fellow food enthusiast Tom Fitzmorris, who has been keeping a tally of restaurant openings (and closings) over the last four years. Tom recently announced that Metro New Orleans has now reached the 1,000-plus mark for open restaurants—that’s 200 more than were open pre-Katrina. Thanks, Tom, for doing the dirty work of keeping not just a running count but putting together www.nomenu.com, with its comprehensive listings of restaurant addresses, telephone numbers and Web site information. Kudos!