What puts a man’s health at risk as he gets older?

More boys than girls are born every year in the U.S. But any lead in health men start with vanishes with the first dirty diaper. 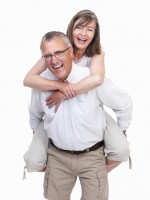 From infancy to old age, women are simply healthier than men. Out of the 15 leading causes of death, U.S. men lead women in all of them except Alzheimer’s disease, which many men don’t live long enough to develop. Although the gender gap is closing, men still die five years earlier than their wives, on average.

While the reasons are partly biological, men’s approach to their health plays a role too.

“Men put their health last,” says Demetrius Porche, DNS, RN, editor in chief of the American Journal of Men’s Health. “Most men’s thinking is, if they can live up to their roles in society, then they’re healthy.”

Men go the doctor less than women, and are more likely to have a serious condition when they do go, research shows. “As long as they’re working and feeling productive, most men aren’t considering the risks to their health,” says Porche.

But even if you’re feeling healthy, a little planning can help you stay that way. The top threats to men’s health aren’t secrets: they’re known, common, and often preventable. Dr. Hoffman consulted the experts to bring you this list of the top health threats to men, and how to avoid them.

They call it atherosclerosis, meaning “hardening of the arteries.” But it could as easily be from the Latin for “a man’s worst enemy.”

“Heart disease and stroke are the first and second leading causes of death worldwide, in both men and women,” says Darwin Labarthe, MD, MPH, PhD, director of the Division for Heart Disease and Stroke Prevention at the CDC. “It’s a huge global public health problem, and in the U.S. we have some of the highest rates.”

In cardiovascular disease, cholesterol plaques gradually block the arteries in the heart and brain. If a plaque becomes unstable, a blood clot forms, blocking the artery and causing a heart attack or stroke.

Even in adolescence, girls’ arteries look healthier than boys’. Experts believe women’s naturally higher levels of good cholesterol (HDL) are partly responsible. Men have to work harder to reduce their risk for heart disease and stroke:

“There’s a saying that ‘children should know their grandparents,'” says Labarthe. “This is a fatal or disabling condition that causes lost family time and working time. But a large number of these events are preventable.”

Lung cancer is a terrible disease: ugly, aggressive, and almost always metastatic. Lung cancer spreads early, usually before it grows large enough to cause symptoms or even show up on an X-ray. By the time it’s found, lung cancer is often advanced and difficult to cure. Less than half of men are alive a year later.

So … are you still smoking?

Tobacco smoke causes 90% of all lung cancers. Thanks to falling smoking rates in the U.S., fewer men than ever are dying of lung cancer. But lung cancer is still the leading cancer killer in men: more than enough to fill the Superdome every year.

No effective screening test for lung cancer is available, although a major study is going on to learn if CT scans of the chests of high-risk people can catch cancer early enough to improve survival.

Quitting smoking at any age reduces the risk for lung cancer. Few preventive measures are as effective — or as challenging — as stopping smoking. But new tools are available that work to help men quit. Your doctor can tell you more.

This is one health problem men can lay full claim to — after all, women don’t have prostates. A walnut-sized gland behind the penis that secretes fluids important for ejaculation, the prostate is prone to problems as men age.

Prostate cancer is the most common cancer in men other than skin cancer. Close to 200,000 men will develop prostate cancer this year in the U.S.

But while one in six men will be diagnosed with prostate cancer in his lifetime, only one in 35 will die from it. “Many prostate cancers are slow-growing and unlikely to spread, while others are aggressive,” says Djenaba Joseph, MD, medical officer for cancer prevention at the CDC. “The problem is, we don’t have effective tests for identifying which cancers are more dangerous.”

But in fact, “Screening has never definitively been shown to reduce the chances of dying from prostate cancer,” according to Joseph. That’s because screening finds many cancers that would never be fatal, even if undetected. Testing then leads to aggressive treatment of relatively harmless cancers, which causes problems like impotence and incontinence.

Should you get screened for prostate cancer? Some experts say yes, but “the best solution is to see your doctor regularly and talk about your overall risk,” says Joseph. “All men should understand the risks and benefits of each approach, whichever you choose.”

Depression and Suicide: Men Are at Risk

Depression isn’t just a bad mood, a rough patch, or the blues. It’s an emotional disturbance that affects your whole body and overall health.

In effect, depression proves the mind-body connection. Brain chemicals and stress hormones are out of balance. Sleep, appetite, and energy level are disturbed. Research even suggests men with depression are more likely to develop heart disease.

Experts previously thought depression affected far more women than men. But that may just be men’s tendency to hide depressed feelings, or express them in ways different than women’s.

“Instead of showing sadness or crying, men get angry or aggressive,” says Porche. “They feel it’s not OK for them to say, ‘I’m depressed,’ so they cope in other ways, like drinking too much.” Men are also less likely to seek help for depression.

The results can be tragic. Women attempt suicide more often, but men are more successful at completing it. Suicide is the eighth leading cause of death among all men; for young men it’s higher.

Most men and women respond well to depression treatment with medications, therapy, or both. If you think you might be depressed, reach out to your doctor or someone close to you, and seek help.

Diabetes usually begins silently, without symptoms. Over years, blood sugar levels creep higher, eventually spilling into the urine. The resulting frequent urination and thirst are what finally bring many men to the doctor.

The high sugar of diabetes is anything but sweet. Excess glucose acts like a slow poison on blood vessels and nerves everywhere in the body. Heart attacks, strokes, blindness, kidney failure, and amputations are the fallout for thousands of men.

Boys born in 2000 have an alarming one-in-three chance of developing diabetes in their lifetimes. Overweight and obesity are likely feeding the diabetes epidemic. “The combination of diabetes and obesity may be erasing some of the reductions in heart disease risk we’ve had over the last few decades,” warns Labarthe.

Exercise, combined with a healthy diet, can prevent type 2 diabetes. Moderate weight loss–for those who are overweight–and 30 minutes a day of physical activity reduced the chance of diabetes by more than 50% in men at high risk in one major study.