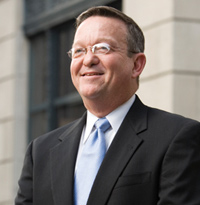 When it comes to the local banking industry, Don Zornman is an insider.

He’s worked in all facets of the industry in his 37 years of experience in the New Orleans market, primarily at Whitney Bank. Now, as president of the Metropolitan New Orleans Market for Hancock Bank, he oversees the Mississippi-based bank’s 11 locations on the north and south shore as well as commercial lending operations for the entire state of Louisiana.

As the man in charge of lending companies money, Zornman, 57, has bird’s-eye view of the local economy. He says New Orleans is faring well despite the national downturn. “This is our best market right now. Hancock Bank entered this market in 2003, and it has grown to be one of our strongest and largest markets throughout our footprint,” he says, measuring by assets, not branch locations.

New Orleans is doing well largely due to the infusion of recovery dollars. Nearly four years after Hurricane Katrina, government money as well as investment dollars continue to flow into the area as planned projects finally break ground and more residents return. The city was named one of the fastest-growing areas in the country recently by the U.S. Census Bureau. A recent study by moving company United Van Lines backs that up, with Louisiana being one of the top states for attracting new residents this year. For the first six months, 56 percent of the moves were in-bound, according to the company’s data.

“I am excited about the future of New Orleans,” Zornman says. “We’ve got so many things that have been in the works that we’re finally starting to see come online. We have a strong book of business here, and there is opportunity for expansion for most of them. I think we are going to benefit over the next several years from the rebuilding effort despite the [national] economy.”

Zornman says companies in the oil-field services sector are doing particularly well. Hancock serves several of the smaller oil service companies. He is also seeing renewed vigor in the tourism sector, which has been particularly affected by the downturn and Katrina. Several high-profile events and conventions have keep visitors coming back to the city. The one area where he sees weakness is in residential construction. Developers overbuilt in communities outside New Orleans when they expected a larger out-migration to areas considered less vulnerable to storm surge and flooding. That didn’t happen. In fact, the residential rehabilitation market in New Orleans continues to be strong as more people repair storm-damaged homes and return.

Hancock Bank has 50 branch locations throughout south-central Louisiana, as well as corporate trust offices in New Orleans and Baton Rouge. Additionally, the New Orleans firm of J. Everett Eaves is a division of Hancock Insurance Agency. The bank’s presence in the city is heavily commercial, with 80 percent of its business coming from loans to businesses. That’s unusual, as many of the other markets, such as Baton Rouge, are more focused on consumer and residential lending.

Zornman says the concentration is due in part to his own background in the commercial sector and his efforts to build a strong staff with experience in that area. The bank also has an eye on attracting and nurturing young talent. While some banks have cut back their training programs, Hancock continues to actively recruit new graduates for its 18-month management-trainee program.

“We have an outstanding program with an eye on the future to help us continue our standards by bringing in people early in their careers and raising them through the ranks,” he says. “It has worked very well for us.”

The city made the cover of the August issue of Entrepreneur magazine as a hotbed of entrepreneurship and a model for economic recovery.

“There is a changing population here,” Zornman says. “We have got people who are wanting to invest in this area. These are new entrepreneurs moving here and a younger demographic. It’s sort of reversing some of the tide that we saw years ago. I think that is what is going to carry us forward.”

As for the national economy, New Orleans may be somewhat insulated, but consumers here are still affected, he says. “People feel like they should be concerned about being concerned,” he says. “They are holding back and being cautious because they don’t know what’s coming down the road.”

Hancock Bank was financially sound and did not take any money from the government’s Troubled Asset Relief Program. He says the bank continues to follow the same conservative lending practices that kept it on solid ground. In fact, while other banks have tightened lending criteria, Hancock has not. People who applied for loans are held to the same standards now as they were three years ago, Zornman says.

“We just want to make sure we’re lending money to people who have the ability to repay,” he says. “It keeps our bank healthy and keeps our shareholders happy.”

221
previous 5 Top Health Threats to Men
next Get Ripped!