Undaunted by the challenges of his position, the district attorney aims to stop crime by joining forces with the community 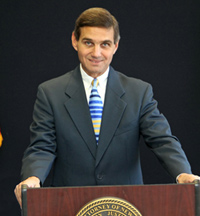 When Leon Cannizzaro won the district attorney’s race last November, he was under no illusions that his job would be easy. He inherited an office burdened with sizable debts, mismanaged processes and systems, and poor relations with the police and the community. What’s more, the DA’s office didn’t even have an office. Because of Hurricane Katrina, the department has had to operate out of three locations, but Cannizzaro is hoping to get his staff back into their home on South White Street by the end of the year.

Among these difficulties, Cannizzaro remains focused on his number one goal: to stop the pervasive violence in New Orleans. The role of a district attorney is essentially to build cases against accused criminals to present in court, but it’s next to impossible to build a criminal case without witnesses to testify.

“I want to restore public confidence in our office,” he says. “No one wants to be a witness to a crime or the victim of one, but we certainly don’t want anyone to be victimized by the legal process. Witnesses need to be treated with dignity and respect. I tell my attorneys on a daily basis to treat them as if they’re your own family. If people have a good experience with us, they’ll take that message back to the community.”

Cannizzaro tells of times when witnesses wouldn’t show up in court, not because they didn’t want to testify but because they weren’t kept in the loop. For instance, a witness may have received a subpoena and arrived in court on the appointed day only to find out the case had already been closed two weeks before. Other times, a witness might make arrangements to take a day off of work and then wait around all day to find out that the case would be delayed another week. Basically, Cannizzaro acknowledges that witnesses make personal sacrifices to help the judicial system—sometimes even risking intimidation or violent retribution from the accused—and so his office needs to support them in their efforts to help.

In a way, Cannizzaro’s career has come full circle, since his first job out of law school three decades ago was in the DA’s office. He worked as an attorney under District Attorney Harry Connick Sr., and by the end of his five-year tenure, he was chief of the trial division, responsible for supervising some 25 lawyers.

Afterward, he went into private practice as a defense attorney, and he experienced what it was like to practice law from the other side. “I had been a prosecutor, so I knew where the other lawyers were coming from and what they were trying to do,” he recalls. “As a defense attorney, I had to tear down cases instead of build them up.”

While he and his partner kept themselves busy with new clients, Cannizzaro’s wife gave birth to their fourth child in November 1985. Making an admittedly spur-of-the-moment decision at the time, the young lawyer put his name on the ballot for an open judgeship. Just a few months later, Cannizzaro was elected to the Criminal District Court, a position he ended up holding for 17 years. He then received a promotion, so to speak, when voters elected him to the Fourth Circuit Court of Appeals.

“That was a judgeship that many people would consider a good job, and I probably could have held onto it until it was time to retire,” says Cannizzaro. But the case transcripts he was reading as an appeals judge disturbed him.

“I saw the serious problems with crime we were having in Orleans Parish,” he says. “I saw the breakdown of communication between the police and the DA’s office. The DA would refuse to accept cases from the police, and the public lacked confidence in the justice system. Little was being done to improve the situation. I felt there was a lack of hope in the city.”

Unlike his impulsive first run for public office, his bid for the district attorney was much discussed among the Cannizzaro family. Although he didn’t have a backup plan, his wife and adult children encouraged him to quit his judgeship and go for it, telling him he shouldn’t miss this opportunity he truly wanted to pursue. He resigned his judgeship with five years left on his term in order to run for DA.

Since he took office in January, new energy has been flowing through the courthouse on Tulane Avenue. This DA’s office is accepting a higher number of cases, 85 percent of them as opposed to 55 to 60 percent before, and achieving higher rates of convictions. For nonviolent offenders, Cannizzaro prefers steering them to drug rehab and job-training programs before attempting prosecution. He also has his lawyers make courtesy calls to homicide detectives, and he sends attorneys to meet with witnesses on the day a crime is committed instead of waiting for the police statement 30 days later.

The new energy extends outside the courthouse, too. “I recently spoke with a group of about 35 law school students interested in becoming prosecutors,” says Cannizzaro. “We’ve never had a number this large.”

152
previous Get Ripped!
next Collective Growth