School may be starting soon, but seasonal menus beat the heat 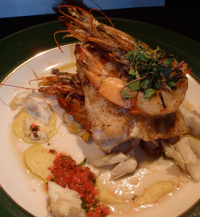 Back to school already? It hardly seems possible that we’re looking toward the close of summer—it’s passed so quickly! But here we are and everywhere we turn, cool lunch boxes are stocked on store shelves, and magazines feature smart, budget-conscious and healthy lunch ideas. This is not a for-kids-only thing; oh no, there’s something for everyone.

Think outside the (lunch) box

While shopping recently at Hong Kong Market, I found stacks of shiny, etched round metal tins, three or more locked together in a group, known as a tiffin box. Such a clever way to carry several components of a meal all together! The origin of these special lunch kits is British India, where the word “tiffin” comes from the slang “tiffing,” meaning to “take a little sip or drink.” Whole Foods has also carried a version of the tiffin box, a handy canvas carrier and bamboo utensil kit that is über-cool and eco-thoughtful. While metal had long been the material of choice for these cool lunch carriers, there are now modern versions in bright-colored plastic to be found around town, especially at Asian grocers where they sell fun and handy Japanese “bento” boxes that are great for toting lunch. Online shoppers will find a large selection of stackable boxes, cupcake holders and other fun food-carrying gear from www.thisnext.com.

Wandering Sephora, it’s easy to get stuck at the Fresh display, where delectable breezy fragrances are fruit or food-centric and not overpowering. One of the best is Fresh Citron de Vigne, with big citrus notes, a wisp of lemongrass and soupçon of pinot noir. In addition, there is a luscious variety of aromas that include strawberry flowers, red currant basil, sugar lychee, and fig apricot. A friend, who knows my fetish for fragrances, came back from visiting the Midwest with a cool bottle of Soivohle Pink Praline perfume. It’s big on pink grapefruit, but as it dries, up pops the rich scent of coffee and cocoa, leaving it sweet but not cloying and totally scrumptious.

Tooling around the Archie McFee Web site (mcphee.com), discover bacon bar soap and the coolest waxed floss around in coffee, waffle and bacon flavors. If your sweet tooth strikes, there’s also cupcake frosting–flavored floss. A lot of the McPhee products can be found at Winky’s or Bootsy’s Fun Rockn’, both on Magazine Street.

Restaurants are rolling through their summer menus, adding and subtracting seasonal ingredients as produce comes in and out of the fields. A crunchy, cool salad is perfect to cut through the heat. The Rum House has opened on Magazine Street (in the former Puccino’s space), and while still in its infancy, some dishes are working well right out of the gate. Ahi tuna ceviche pairs the clean flavors of rare tuna with juicy cubes of mango and spicy peppers, tossed in citrus juices. The salads are also standouts, particularly the jerked chicken chopped salad with the fiery kick of jerk spices, tempered by silky avocado, bright papaya and the sweet tang of guava vinaigrette. Though not a salad, it would be remiss to leave out the glorious jerk grilled drum “on the half shell,” topped by a peppery jerk-garlic-lime butter and a side of jalapeño cole slaw.

Getting its groove on, Marigny Brasserie has come up with a menu and chef revamp, resulting in a sleek, summery menu with a couple killer salads, the West Indies crab salad, with fat jumbo lumps of blue crab, sweet onions, hearts of palm and tender-crisp asparagus, tumbled in a lemon-chive vinaigrette, and the classic strawberry walnut salad, combining baby spinach and sweet berries with tart bleu cheese crumbles, crunchy candied walnuts and a strawberry vinaigrette.

Want to take a culinary world tour without leaving the city? Vega Tapas Cafe is full throttle into its Tour of the Mediterranean dinners. This August, Vega is all about exploring the flavors of Greece, Italy, Monaco and Spain. Multicourse dinners are $27 and you can tack on just $15 more to add the regional wine pairings. Proving that great minds think alike, Emeril Lagasse’s New Orleans restaurants—Emeril’s, NOLA and Emeril’s Delmonico—offer a summerlong Cuisines of the World dinner series that explores some of the world’s most celebrated food cultures—France, Italy, Spain, Morocco, Greece, India, Vietnam, Polynesia and Brazil. Through September 30, Emeril’s chefs de cuisine create nightly three-course dinners for $35. This month, Emeril’s hits India; Emeril’s Delmonico heads to Morocco; and NOLA travels to Greece. (And one bite of gossip: NOLA has promoted sous chef Josh Laskay to chef de cuisine. Yay, Josh! NOLA’s former chef de cuisine Michael Ruoss has moved on to become corporate chef for local restaurateur and savior of Camellia Grill Hicham Khodr.)

Kudos to the King of Seafood

Perrone’s olive salad is back!