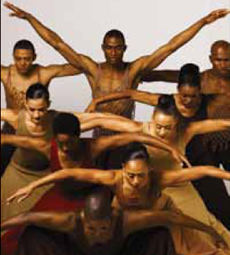 The performing arts scene is thriving in New Orleans these days, and the upcoming season should be a great one. Classical music fans will have the chance to see the superstars Yo-Yo Ma and Midori; the Alvin Ailey Company and a bevy of tappers will delight the city’s dance fans; Southern Rep, Le Petit Theatre and the Jefferson Performing Arts Society have busy and exciting schedules ahead; and for the first time since Katrina, the touring companies of several Broadway shows will stop in New Orleans. Below is a (by no means exclusive) list of what we can expect in the months ahead.

One of the great thrills of the season will be the return of the national Broadway touring companies to the city. The Saenger and the Orpheum have been shuttered since Katrina, leaving New Orleans without its former venues for these shows. But the reopening of the Mahalia Jackson Theater for the Performing Arts at the start of this year, after a $22 million renovation, has changed all that, and this season New Orleans musical theater lovers will have the chance to see five top-rated productions. The inaugural show is the perennial favorite Cats, in a special engagement from October 27 to November 1. Cats is followed, from December 1 to 6, by The Color Purple, a musical adaptation of the critically acclaimed film that made Whoopi Goldberg a star back in 1985. The Broadway production earned 11 Tony Award nominations and ran for more than two years. Mamma Mia!, which was a smash success when it appeared in New Orleans prior to Hurricane Katrina, will play at the Mahalia Jackson next year from February 2 to 7. Wicked, about friends who grow up to be Glinda and the Wicked Witch from The Wizard of Oz, has been one of Broadway’s biggest hits ever since it premiered in 2003. The show is sure to fill up the Mahalia Jackson Theater from March 24 to April 11. The season culminates June 8 to 13 with Avenue Q, a clever and entertaining show aimed at grownups who miss the winsome ways of Sesame Street. For more information and tickets, visit broadwayacrossamerica.com/New-Orleans.

“Our in-joke is that it’s the Doug Wright season here,” says Aimee Hayes, artistic director of Southern Rep, one of the top regional theater companies in the South. Last season, Hayes’ first as artistic director, the company debuted Shotgun, the second show in John Biguenet’s acclaimed Katrina trilogy, and also put on top-notch productions of Speech and Debate and The Seafarer, among others. As Hayes’ statement suggests, the gifted playwright Douglas Wright plays a prominent part in the 2009–2010 season: The brilliant I Am My Own Wife, which captured the 2004 Pulitzer Prize and a Tony Award, has its regional premiere, from November 7 to December 6, and then the mesmerizing musical Grey Gardens, which Wright wrote the book for, winds down the season in the month of May. But we’re getting ahead of ourselves! Starting off the season is violinist-turned-playwright Michael Hollander’s Opus, from September 16 to October 11. Then, in an effort to continue nurturing new and local works, Southern Rep gives us the New Play Bacchanal, featuring workshops, readings and other “theatrical explorations,” from January 14 to 31. Following is the regional premiere of Ameriville, from February 24 to March 7, and With a Bang, by NOLA project member Peter McElligott, from March 24 to April 18. Last but not least, The Piano Teacher, the season closer and the winner of the New Play Bacchanal 10-Minute Play Riot, by playwright-comedian Julia Cho, will be mounted May 19 to June 30. For more information visit, southernrep.com.

Le Petit’s recent economic problems were widely publicized, but the theater has made a quick and impressive about-face since the spring. Earlier this year, it hosted the first Live Initiative Theater Credit production to hit New Orleans, the Broadway-bound musical White Noise. The show received excellent reviews and gave a boost to both the theater and the city. Now, with a full slate of exciting musicals on the way, the theater encourages the city to Rediscover Le Petit Theatre. It’s partnering with Southern Rep on Grey Gardens, which will play on its stage. In addition, theatergoers can see local productions of Elton John and Tim Rice’s Aida, from September 3 to 20; the enduring musical comedy Damn Yankees, from October 15 to November 1; and the seasonal favorite White Christmas, from December 3 to 20. From March 4 to 21, the musical 13, featuring a cast of teens, will play at Le Petit. In between, the theater will be used by the NOLA Project and potentially other companies. For more information, visit lepetittheatre.com.

NOBA is not an independent dance company but instead brings some of the world’s most exciting and innovative troupes to the city every year. Last year, among other works, Troy McIntyre collaborated with the Preservation Hall Jazz Band in a tribute to New Orleans’ music and spirit, and the Houston Ballet debuted its lavish period piece Marie. “This season features some of the world’s most amazing dance companies and is a true testament to the ever-increasing quality and versatility of the dance industry. We are proud to celebrate 40 years of serving the community with education and artistic programs that continue to grow by leaps and bounds,” says Jenny Hamilton, NOBA executive director. “Our 40th anniversary pays tribute to the extraordinary visionaries who have supported NOBA’s mission and whose commitment and creativity have charted the course of innovation, evolution and collaboration that has established the organization we are today.” NOBA opens with the Houston Ballet at the Mahalia Jackson Theater on October 24. On November 20 and 21, tap star Jason Samuels Smith and others pay tribute to the late, great Gregory Hines. The highly acclaimed all-male troupe Les Ballets Trockadero de Monte Carlo will delight audiences with gender-bending spins on classical favorites in late January. The legendary African American dance company Alvin Ailey American Dance Theater will help the city celebrate Black History Month in style on February 26 and 27. And finally, France’s Lyon Opera Ballet visits New Orleans on March 5 and 6 of next year. For more information, visit nobadance.com.

The city’s premier opera company is the aptly titled New Orleans Opera, and it has existed since 1943. Though budgetary issues forced the company to cut plans to produce Aida and Porgy and Bess this season, the New Orleans Opera promises to provide music lovers with a rewarding season full of high-quality fare. Several favorites are upcoming, all performed at the Mahalia Jackson Theater. Puccini’s Tosca opens the season with performances on October 9 and 11; Gounod’s 1867 work Roméo et Juliette, inspired of by Shakespeare’s immortal play, follows November 20 and 22. To replace the more lavish and costly Aida and Porgy and Bess, the company will present the Verdi Requiem on January 20 and 22. Wagner’s The Flying Dutchman will round out the season on March 19 and 21. For more information, visit neworleansopera.org.

Under the guidance of the dynamic conductor and music director Carlos Miguel Prieto, the Louisiana Philharmonic Orchestra is on the rise. “The orchestra has never sounded better,” says managing director Babs Mollere. As a result, she adds, the orchestra’s fan base is “building to a crescendo.” In fact, the subscriber base has increased by 50 percent. The orchestra has also been able to attract some of the world’s top classical performers, and this year there will be concerts featuring Yo-Yo Ma, who plays Schumann’s Cello Concerto with the LPO on October 18 at 4:30, so Saints fans don’t have to choose between the game and the show—and, in 2010, Midori, playing Sibelius’ Violin Concerto with the LPO in Covington on January 8, and at the Mahalia Jackson on January 9. Among other highlights, the nationally renowned pianist Anne Marie McDermott performs with the orchestra on December 12, and former LPO director Klauspeter Seibel makes several guest appearances. The season ends with a tribute to the rock group Pink Floyd, conducted by Brent Haven, on May 15. For more information, visit lpomusic.com.

JPAS had a banner 31st season in 2008–2009, with such varied works as the family-friendly Miracle on 34th Street, the opera Madame Butterfly and the United States premiere of the musical Scandalous. This season promises to be similarly eclectic, with “something for everyone at every age,” according to executive director Dennis G. Assaf, at its Westwego and Metairie spaces. Some highlights of its busy schedule are the children’s show Pinkalicious, from September 24 to October 4; the decidedly adult comedy, Viagara Falls, from October 2 to 18; another production geared for grown-ups, a stage version of the cult movie The Rocky Horror Picture Show, from October 23 to November 7; Duetti Soli, featuring opera solos and chamber music, on October 25; a return engagement of the popular Disney’s Beauty and the Beast, from November 28 to December 13; Footloose, a musical theater adaptation of the 1984 movie, January 28 to February 7; and The Producers, the Mel Brooks musical, from March 19 to 28.