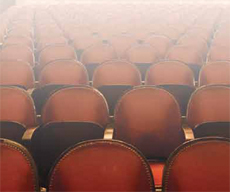 The spotlights are about to get a lot brighter this fall as the city gears up for its biggest theater season in four years, with the return of touring Broadway shows downtown after an extended absence due to Hurricane Katrina.

Thanks to the $22 million restoration of the Mahalia Jackson Theater for the Performing Arts, big-budget Broadway-style shows have a venue large enough to showcase some of the hottest touring productions in the country. The Broadway Across America 2009–2010 season kicks off with a special engagement of Cats in October, followed by The Color Purple, Mamma Mia! and Wicked. Avenue Q rounds out the season in June.

But the Broadway series is only the latest act in a theater renaissance that has been flourishing in the city since the storm. Gifted young actors have started smaller production companies like the NOLA Project, FourFront Theatre and InSideOut Productions within the past four years to produce adventurous new shows as an alternative to the conventional fare offered by the more established community theaters. And there’s been a shake-up at the city’s oldest community theater: Le Petit Theatre now has a new staff and production company that promises to take the institution to new heights with an ambitious season of six big musicals. Add to the mix the consistent quality of top-notch acts at Le Chat Noir and Southern Rep and you’ve got an embarrassment of riches for local theatergoers.

“I think it’s great that theater is flourishing in this town and that there seems to be a really good audience who is supporting theater,” says Gary Rucker, one of four co-founders of FourFront Theatre. “As a producer, I especially think that’s great to know that I can do a show and that there’s an audience out there for it.”

FourFront is in the midst of its second season, having produced My First Time in August at Le Chat Noir and Alter Boyz this past spring at Southern Rep, followed by an extended run at Le Petit. It will also stage the children’s musical Pinkalicious, the Musical at the Jefferson Performing Arts Society Westwego Theatre and the regional premiere of The 25th Annual Putnam County Spelling Bee at Le Petit. Planned shows for next year include Dirty Rotten Scoundrels and November.

Rucker thinks that events like the Broadway series will help local theater by luring audiences who may go to a show for the first time and then sample local productions. The only challenge is that it makes it harder for local producers to secure performance rights for hot new shows once they close on Broadway. Typically, local theaters are only able to get those rights after regional tours close or if the city isn’t near one of the tour stops. “As a producer they have made life difficult for us,” he says. “But my feeling is that whatever gets people to the theater is a great thing.”

Gary Solomon is Le Petit’s new managing director. His company, the Solomon Group, took over management of the financially struggling theater this past spring. Since then, he has worked to raise money to pay off Le Petit’s more than $100,000 debt. The theater begins its new season in September with Elton John and Tim Rice’s Aida. After that, Damn Yankees begins in October, followed by White Christmas, the musical 13, Grey Gardens and The Wedding Singer, which concludes the season in July.

“We’ve got six really great shows,” Solomon says. “They are ambitious because we want to make sure that we give people this first season back at Le Petit to rediscover the institution and have a really great experience here.”

The theater just scored a major publicity coup by hosting previews for Broadway-bound musical White Noise, a cautionary tale about a group of white-supremacist pop stars who are promoted as a mainstream act by unscrupulous record executives determined to make money from controversy. The unconventional and challenging show about racism and modern culture was a success, selling an average of 75 percent of seats over a three-week run of 24 performances, Solomon says.

The show was the first to take advantage of the state’s new tax incentives designed to lure Broadway producers to the city in the same way similar deals have worked for the film and television industries. “What we saw with White Noise is that if within three weeks you can get 6,000 people to pay a premium for tickets, they really do want to see some theater,” Solomon says. “There is definitely a market for it.”

Another lesson learned is that marketing and pricing options are key to drawing an audience. Solomon changed ticket prices for Le Petit shows by increasing the cost of the best seats in the house and lowering the cost of other seats to pull in nontraditional and younger theatergoers. “There is a market for people who want to pay a premium price to get a premium experience. And then there are also people who want to go to the theater who just can’t afford a $30 ticket,” he says.

Solomon has ruffled some feathers in the local theater community with some of his changes, namely his willingness to bring in producers or actors from outside the city for certain shows. He says that Le Petit will always seek out local talent first before casting people from other cities. “If we feel like we need to look outside of New Orleans to cast a particular role if we have gone through the process of an open call and we have given everybody a first shot in the local market, I’m not afraid to go outside of New Orleans. I think that if we look at organizations like the ballet and the opera, they are constantly putting outside talent on their stage and it only makes everybody work harder,” he says.

Of course, there are exceptions. Donald Byrd, a Broadway choreographer who was nominated for a Tony for his work on The Color Purple, choreographed White Noise. He fell in love with the city and wanted to stay longer. Solomon hired him to direct Aida.

“I don’t think there is a single actor in the city who would say that they didn’t want to work with a Tony-nominated choreographer in a small community theater,” Solomon says. “That’s experience you just can’t buy.”