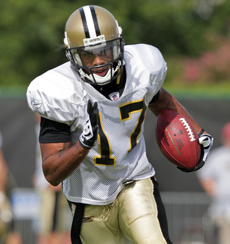 In an attempt to reach perfection, every sports team seeks to improve upon what they’ve done in the past. The New Orleans Saints’ passing offense faces a peculiar challenge: Trying to perfect what already appears to be perfect. For the league’s leader in yards per game, passing yards per game and scoring, improvement may lie not in adding to their already sterling arsenal of weaponry but in showing opposing defenses there is nothing left to take away. Together with a bolstered defense, featuring new stalwarts like Darren Sharper and Malcolm Jenkins and a hopefully reinvigorated running game in the form of a bulkier Pierre Thomas and a mentally toughened Reggie Bush, the Saints may add one more newly dangerous feature to their emerging hopes: a new receiving threat in the form of Robert Meachem.

Media and fans have criticized the 2007 first-round pick Meachem as a supposed bust, for not getting on the field enough in his first two years.Many have suggested that a tight end such as Greg Olsen or Zach Miller would have been a better selection considering their productivity and the extra picks surrendered to obtain the mercurial and unpredictable Jeremy Shockey down the line. Olsen has had 93 receptions in two seasons with the Chicago Bears, including 54 last season, while Miller has had 100 receptions, including 56 last season for the Oakland Raiders; together they have combined for 11 touchdowns. Meanwhile, to fill their own void for a downfield receiving threat at tight end, the Saints traded away second- and fifth-round draft picks to acquire Shockey, picks that could have been used for other needs. In comparison, either due to injury or lack of progress, Meachem was the only 2007 first-round draft pick to not see game time in 2007, and last year he managed but 12 receptions. His name has been mired on the depth chart below those of Devery Henderson and Lance Moore in the wide receiver slot opposite Marques Colton. Thus, for Meachem, the criticisms have been frequent, and the challenge of overcoming the predispositions of the pundits and the fans will be difficult.

However, several factors indicate this could be a premier year for Meachem. For all the receiving corps’ productivity, it does not have a true, dominant, primary wide receiver. Colston is a leader on the team and its primary receiver, but he is still not a prominent force like an Andre Johnson or Larry Fitzgerald, and there is room for anyone to step up. In addition, Drew Brees, being the superb game-captain he is, will and can go to whoever has the hot hand on any day, as evidenced by his having tied an NFL record last year for throwing touchdowns to 11 different receivers. In fact, when Colston became inactive for several games last year due to injury, Brees turned to a previously little-known camp wonder named Lance Moore who for at least nine straight games turned in the NFL’s best imitation of Marvin Harrison found outside of Indianapolis. Ironically, a similar opportunity could arise this year for Meachem, as now it is Moore who has been hampered by a torn labrum, which, although repaired by surgery as Moore’s has been, can still affect a receiver’s ability to absorb heavy hits from defenders. Devery Henderson, technically the starter ahead of Meachem at the second receiver position, for all his speed has never been able to consistently catch the ball and thus appears to be relegated to forever being a specialized deep threat, not a consistent full-game performer whom fans can expect to catch more than 35 balls in a season. So if Henderson continues in his specialized role and if Moore is slow to recover this year, Meachem could step in as a versatile option for Brees.

At Tennessee, Meachem was known for catching lots of passes and scoring frequently, especially in 2006 when he caught 71 passes for 1,298 yards and 11 touchdowns in 13 games. In New Orleans, last year in his few opportunities, 13 touches receiving and rushing, Meachem was remarkably productive with four touchdowns and a receiving average of 24.1 yards per catch. And this is Meachem’s third season, a big year for many a wideout, as several past players like Braylon Edwards, Roddy White, Roy Williams, Lee Evans and Jericho Cotchery have shown.

Finally, arguably the Saints coaches—and Meachem himself—feel highly motivated to prove the worth and value of that high pick three years ago. They have surely heard the criticisms and complaints as a prized first-round draft pick sat on the bench for two years while free agents and lower value picks like Moore and Colston excelled in his stead. In the Saints’ first preseason game of 2009, Saints fans caught a glimpse of what they may expect in the coming season: four touches, one carry plus three attempted passes to Meachem with three completions by the third quarter, including one of the prettiest bombs any fan will ever see, featuring Meachem breaking free behind the Bengals’ secondary to haul in a perfectly timed 65-yard heave from Mark Brunell. That play demonstrated the reason the Saints drafted Meachem, and he executed it as close to perfection as a receiver can. With plays like that in the 2009 season, the Saints offense and Meachem may be closing in on the unthinkable—perfection of the NFL’s already most potent offense.