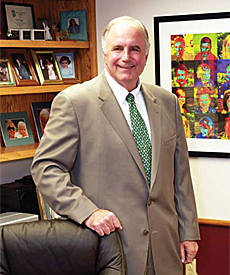 More so than many other world-famous cities, New Orleans is defined by its architecture. And locally owned construction firm Woodward Design+Build is the force behind a good number of New Orleans’ structures, both old and new. The company has been involved in renovations of iconic restaurants such as Commander’s Palace and Galatoire’s. It constructed the Harrah’s Hotel on Poydras Street and retrofitted a grand, old funeral home on St. Charles Avenue to house a new Border’s bookstore.
“Our commercial projects range from $500,000 up to $100 million,” says Woodward president Paul H. Flower. “We’re an integrated design and construction firm. By that I mean, we have architects and structural engineers on staff, as well as general contractors.”
In addition to retail operations and hotels, the projects that fall under the firm’s purview include car dealerships, university buildings, condo and apartment developments, industrial plants, medical facilities and office buildings. Woodward has built buildings across the South—from San Antonio, Texas, to the Florida panhandle—but the majority of its business comes from Louisiana and southern Mississippi.
Since the real estate market crashed and a credit freeze gripped the United States’ economy, the construction business has found itself in a challenging environment to say the least. Financing for projects can be hard to come by, and even projects that have already begun can see their financing pulled. State governments nationwide are facing budget shortfalls, which has resulted in a contraction on public spending on construction. According to Flower, however, New Orleans is weathering the downturn better than most markets.
“I’m in a peer group made up of ten contractors who lead similar companies in noncompeting markets,” he says. “From talking to my peers, it seems we’re in much better shape. We are fortunate that we have a significant backlog, and we’ve been able to maintain it. Still, we are somewhat concerned about what the regional construction market will look like in 18 months to two years.”
Post-Katrina renovation and rebuilding projects have helped buoy the local construction market, but at the same time, the relative health of our market has attracted firms to move in from outside areas where the work has slowed down. As it stands, Woodward is the second largest firm of its type in the New Orleans area, according to CityBusiness.
Again, the company’s full name is Woodward Design+Build, and this focus on design-build is one thing Flower feels helps differentiate his firm from its competitors. While a more traditional model in the construction industry has competing firms present their bids to the client before work begins, the newer design-build model emphasizes a firm’s in-house architects and designers and brings the firm into budget and financing discussions early on. The bidding stage is eliminated, which quickens the pace of work. And because one firm is overseeing a project from start to finish, it leads to greater teamwork and accountability.
Beyond its design-build capabilities, Woodward is also seeking to be ahead of trends in sustainable design, which encompasses strategies to create buildings with reduced environmental impact. “I absolutely see the industry moving forward toward energy efficiency,” he says. “We offer sustainable design as a matter of course. For some clients, it’s important, while others may not care as much. But it’s something we feel is coming, and we need to be very proficient in it.”
The firm began in 1924 by a certain Carl E. Woodward, whose father, William, founded Tulane University’s architecture school and whose uncle Ellsworth was a noted artist. The new company focused on smaller projects, always with a design component, and gradually moved into large commercial jobs. Riding the wave of the Louisiana oil boom, the Woodward firm expanded rapidly in 1970s and 1980s, but the crash in the late 1980s caused its business to contract by two-thirds, down to revenues of $10 million. Flower, who became president of the firm around that time, led Woodward up to its current revenues of $220 million. He acquired full ownership of company stock in the early 1990s.
Flower was born and raised in Uptown New Orleans, and like Carl Woodward’s father, his father was an architect, too. He received his undergraduate degree from Georgia Tech and worked in Atlanta for a while, but he married a New Orleans girl, and she coaxed him back to his hometown. During his early years of employment at Woodward, which he joined in 1970, he received a master’s of engineering degree from Tulane.
“I started out in architecture because my father was that, but I found I liked structure and structured design more, so I changed my focus  to civil engineering,” he says. “My interest was in how you design the foundation of a building and the skeleton. I’m interested in how to make things stand up.”
754
previous Culture Club
next A Passion for Giving