A Class by Itself 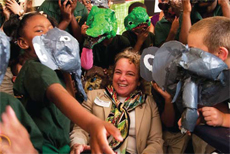 Ten years ago, Campbell Hutchinson and Allison Stewart became concerned about the lack of arts education in New Orleans public schools. They launched a small Saturday program to teach kids the visual arts, and today the nonprofit KID smART offers an integrated arts curriculum to 2,000 pre-K through eighth-grade students at 13 schools in Orleans and Jefferson parishes. Executive director Echo Olander talked to New Orleans Living about how KID smART works to address the lack of arts education in New Orleans.
What is the state of arts education in New Orleans?
We’re doing a survey right now of the Orleans Parish schools, and there aren’t a lot of arts specialists anymore. You used to have a certified arts specialist in visual arts and music, at a minimum, in every school. That just doesn’t exist.
Why did schools stop teaching the arts?
When testing, especially with No Child Left Behind, became so prevalent in the United States, schools starting saying, “We’ve got to teach more English, we’ve got to teach more math.” That’s basically what’s tested, and money follows based on test scores. The arts aren’t tested, so that became one of the first things that went out of the budget.
How has KID smART addressed that void?
What KIDS smART does is arts integration. The artist doesn’t just come in for a class and the teacher leaves. It’s a co-teaching program.
How do you integrate arts into the curriculum?
We’re multidisciplinary, so we have artists of every variety. Our artists go in and talk with the teachers about what is on the curriculum. It’s very handmade work. It’s completely specific for each circumstance. For social studies, it’s a really easy connect. Language arts is also an easy connect. For math, if you’re a visual artist, for example, then you might study artists who were doing geometric work and have the students look at shapes and do measurements as they create their own artwork. You build in those skill sets that that teacher has to teach, but you do it in a sneaky way. The kids think that they’re just making a painting or they’re creating a play.
Can integrated arts education counterbalance what testing has done to education?
Absolutely. A lot of studies have shown that creativity and innovation are what the arts really teach. Thinking of different answers for the same question. Being able to take something that didn’t work and make it work. Finding new ways of thinking. It’s called “studio habits of mind.”
Do schools recognize the value of KID smART?
School time is very valuable, so we’ve got to prove that what we’re doing will help them raise the test scores. We’ve been doing a lot of evaluation and so have people around the country, but it’s difficult to find a causal link. If you talk with the teachers and you talk with the educators, however, they see it and they know that it’s happening.
What do the students think about KID smART?
The kids love it. In a standard classroom, the teacher stands in front of the class and the kids sit in their desks. That happens all day long. When the artist comes in, it’s like they’re going on a safari. We have hip-hop artists, for example, and the kids make hip-hop lyrics. It’s so much more fun than the regular work. Most kids start thinking about dropping out in fourth and fifth grade. If you can keep the kids incentivized to come to school because it’s fun–they’re enjoying themselves, they’re learning things and they feel invigorated by that–then what a great gift to give to a child and a school.
Is it possible anymore to argue that the arts should be taught because they have intrinsic value?
We do make that argument, but it’s an “and.” There is so much pressure put on the leadership of schools to make something happen. The arts are part of the core curriculum from the U.S. Department of Education. But until you have a test that says your child isn’t doing well because they have tested poorly on the arts, nobody is going to put resources into it. That’s just how it works.
Can groups like KID smART make up for the lack of arts education in public schools, or do we need a sea change in the way schools are run?
I think both. What we do is different than what an arts specialist would do in a school. There should be arts specialist in a school, and there should be arts integration, because they are two different things. By putting arts integration into the school and getting kids and parents excited about it, however, I think it will lead principals to hire more arts specialists.
253
previous Getting the Green Light
next Agent of Change