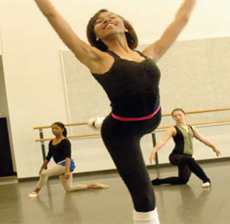 It was atypically beautiful outside during the last week of August. Though it was the first week of school, none of the students at the New Orleans Center for the Creative Arts (NOCCA) seemed to mind spending such a lovely afternoon inside. Instead, they were full of excitement about once again doing what they love most: singing, acting, painting, playing music or engaging in another of the creative arts alongside talented peers their age. “It’s heartwarming, because they love this place,” says director of communications Brian Hammell. “All of our kids are very unique, and this is a very safe and nurturing environment for them. We push them and we work them hard, and they have to work hard to stay, but it’s a great little nest for them.”

This work ethic was evident as Hammell took me on a tour of the school. We visited dancers, tapping in one room and performing ballet in another; media art students, working alone in their studios. The halls were already lined with self-portraits done by some of the artists. And in a drama workshop, in one of the theaters where NOCCA and other productions are held, a class was engaged in animated conversation. “It’s like when you … ” someone began. “Don’t tell us what it’s like,” the teacher corrected gently. “Describe how it felt.” Learn how to embody and express the emotion.

NOCCA, founded in 1973, provides arts training to high school students using professional artists to not only teach, but to mentor. NOCCA’s 500 students attend either half a school day or after school Monday through Friday and receive high school elective arts credits for their work. Though the NOCCA credits appear as such on their transcripts, students graduate from the public, parochial, charter, private or home schools they attend. “We rely on these institutions to partner with us, to allow their great kids to come. Sometimes kids come for one year, sometimes for four. We’ve had kids come here for four years and graduate valedictorian of their classes.”

NOCCA also aims to prepare attendees for college, whether to study the arts or another profession. This semester alone the calendar includes not only college informational days but special visits by representatives from prestigious schools like Dartmouth and Juilliard. In addition, NOCCA advocates for and otherwise assists its students—in particular low-income students—in obtaining scholarships to college. In both these respects the program has been phenomenally successful. “Last year we had 96 graduates, and 94 had college plans,” Hammell states. Approximately 80 percent of those graduates receive some form of scholarship.

Not only has NOCCA enjoyed remarkable success in sending graduates to college, but its students have done well in their professional lives. Among doctors, lawyers and successful professionals are acting grads such as Anthony Mackie (The Hurt Locker) and Wendell Pierce (Treme), musicians Wynton Marsalis, Terence Blanchard and Harry Connick Jr., along with successful artists in numerous other disciplines. The national reputation of the jazz program is so strong that in June, 14 NOCCA jazz students were among 150 young musicians from across the country who participated in the Jazz Studio, a workshop hosted by Michelle Obama at the White House.

This year, NOCCA has faced its share of challenges. Along with schools and arts programs across the state, NOCCA has been hit hard by budget cuts. “We were cut by around 20 percent,” Hammell says. “That equals $1 million, which was huge. What makes it even more difficult is that the cut followed several budgets where we were being cut here and there. So when the $1 million hit, we were pretty lean.” In order to adjust, NOCCA cut its popular Saturday program and its summer program, which drew students from around the state.

Hammell was especially concerned about a third cut, which ended NOCCA’s busing program. “I was thinking about those little kids who were on that bus and wondering if I would see those faces this year. But we’ve had an active carpool list, and we’ve tried to provide kids as many resources with public transit as we possibly could. I couldn’t even tell you a handful, maybe five kids we lost to public transportation. They just have linked up, they’re walking to NOCCA, they’re doing whatever they have to do to get here.”

For extra funds, NOCCA will rely more heavily on its nonprofit fund-raising arm, the NOCCA Institute (noccainstitute.com), which among other things provides financial aid to students needing assistance with supplies and transportation, supports the center’s artist-in-residence series and sponsors a yearlong calendar of events. In addition, during the year, Hammell says, “We will have the chance to go back to the state and ask if any money has been found for us, and we’re praying for that.”

In the meantime, the enthusiasm of students and faculty alike is unabated. “It looks like we’re going to have a great bunch,” Hammell says of virtually every class we visit on our tour. As we conclude, he sums it up: “This should be a really good year.”

230
previous Season’s Greetings
next Acting Up