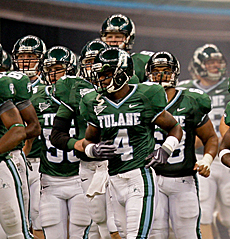 Night settles in at the Coach Bob Toledo radio show every Wednesday at the Uptown campus watering hole Bruno’s Tavern. As a top-division NCAAfootball program’s primary media outlet, the show should presumably have a big turnout, with boosters and students replete in Greenie fashions, hanging on every word that the coach may utter giving insight into the games to come.

However, the show is relegated to a cramped back room in an otherwise large building, the coach’s voice overwhelmed by the din of a busy college hangout, with perhaps 25 interested persons listening in to some degree, and even then somewhat distracted. Given that Tulane initiated and helped build a major industry in New Orleans (the Sugar Bowl and big-time college and sporting events and tournaments), it is a mystery how this state of affairs came to be.
The Green Wave is once again mired in a season of early desperation following routes against Tulsa (37–13) and Brigham Young (54–03) at home, and Toledo has spoken of the urgent need to defeat lower-division McNeese State, also at home. Usually, a three-game homestand to open the season would be a boon to any team, but Tulane seems to gain nothing in terms of home-field advantage from the cavernous Superdome. The Dome is warm, boisterous, booming from the rafters when the Saints play on Sundays (especially when they’re surging, as they are now), but with Tulane’s smallish and sometimes overreported crowds numbering closer to ten- to twenty-thousand, it feels cold, clinical, temporary. And indeed the Dome has seemed permanently “temporary” for the Green Wave ever since the hallowed Tulane Stadium, with its iconic fences, facade, hedge rows and Uptown locale, was abandoned and demolished in the mid-1970s for the big, bright future that was supposedly awaiting the city’s business and sports community on Poydras Street.
Arguably, a private school cannot compete with the large state universities like LSU, Texas and Ohio State, but, then, Tulane is not in their leagues, literally. Rather, Tulane competes in Conference USA, which consists of supposedly size-and-sports-funding-challenged schools like Rice, Houston, SMU, Southern Miss, Tulsa and Memphis. And beyond the conference, private schools like Northwestern, Vanderbilt, Duke, Stanford, Georgia Tech and, of course, Notre Dame, have been able to compete, and occasionally win and thrive against the biggest of big-school programs over the years. Schools like Vanderbilt, Stanford and Northwestern especially have been able to bring in millions  over the years just by virtue of their existing as lower-tier schools in the BCS conferences like the SEC, Pac-10 and Big 10.
To make matters worse, Tulane was a founding member of the most powerful, influential and richest conference of them all, the SEC, until 1966, when the school’s administration made the decision to abandon the conference to be an independent. Time has shown that to be a terrible decision, not only from a football standpoint, but also for the school’s entire sports program and for the university itself. Because even as a bottom feeder in a big league, small schools like Tulane can make a lot of money, which can be devoted to the continued construction of facilities, academic programs and toward building fundraising enthusiasm and school pride that no amount of cold-calling and mailers can ever achieve. Vanderbilt is a fine example of this: It is able to attract quality players with hopes of playing in the nation’s best conference, thereby gaining the attention that will help them make the pros one day. Meanwhile Vanderbilt rakes in millions of  dollars from bowls, television and other events and programs that are distributed throughout the SEC’s schools just by virtue of their membership. The decision to go independent may have been understandable in the 1960s, but time has shown it to be poor administrative judgment.
Coach Toledo is dealing with those consequences even now. His demeanor is like an embattled colonel at the Battle of the Bulge, surrounded and undersupplied yet defiant. Toledo is known as a college football veteran, someone who has seen success on the national stage, at UCLA, and who has experience at several major programs. But in terms of facing McNeese State, he has sounded almost as though he is preparing the die-hard Greenie fans for another deeper letdown and has seemed to abandon any remaining pretense of competing with LSU by simply dropping their series, one of the oldest in the nation, though it ceased being a true “rivalry” long ago (probably right around when Coach “Vegas” Vince Gibson departed 27 years ago).
As to whether Tulane can ever be competitive again, some critics say that the recruiting is the problem. Yet with players like Matt Forte, Mewelde Moore, J. P. Losman, Roch Hontas (who legendarily out-dueled NFL legend John Elway once) and Patrick Ramsey, Tulane has shown that it is more than capable of recruiting extremely talented players, especially at the skill positions. Some say that the style of coaching is the key, that an old hand like Toledo is not the right path but someone more innovative and younger is (for instance, a Gary Crowton). And yet while Tulane has had success with that approach in the past, most notably Tommy Bowden (who posted an amazing 18-4 record in two years), the administration quite consciously and purposefully abandoned that model (first by refusing to retain Rich Rodriguez, and then by moving toward the anemic Chris Scelfo and Toledo instead).
Some argue that a new stadium and practice facility Uptown, near campus, is necessary for success, but again the administration has declined to pursue such possibilities. In a footballcrazed city, filled with college football devotees and featuring one of the deepest histories of college football to be found anywhere in the nation, there is a   gaping vacuum where the sport should reside. Until the school administration, its students or alumni, or New Orleanians themselves, decide otherwise, it will remain that way to the great loss for the whole city. But it certainly doesn’t have to be that way.
220
previous A Good Catch
next Sharper Image