As the weather turns cooler, the dining scene heats up 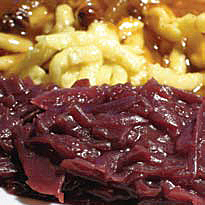 In my house, October is known as the Month of Lorin, because I celebrate my birthday, my son Remy’s birthday and my wedding anniversary (on Halloween). For those in the restaurant/dining/food industry, October is the beginning of busy season; business picks up and markets, both green and big-box, are flush with seasonal produce and deeper, more intense fall foods.

German Feasting
Oktoberfest, with its masses of German cuisine (schnitzel and kraut), dancing, plenty of fun and steins of beer, began in the last week of September and continues through October 24 at the Deutsches Haus. But the Deutsches Haus isn’t alone in whipping up bold and delicious German cuisine. Jager Haus German Bistro & Coffee Shop cranks out daily dishes of German standards, including a fork-tender sauerbraten, crisp potato pancakes and a fantastic Oktoberfest meatloaf, a beer-steeped pork-and-beef slice, garnished with kraut, red cabbage and a baby dill pickle. At dessert, head straight for the big wedge of coconut-rich German chocolate cake or the house-made German liquor ice creams—herbaceous Jägermeister or honey-sweet Bärenjäger.

To Market, to Market
Cool weather crops are in and the green markets (Crescent City, Mid-City, Westwego, Covington) are loaded down with bright lettuces, greens, squash and more. If you’re into food trends, take note: Kale is this season’s darling, with national food magazines offering multiple features and recipes. My favorite of this year’s crop comes from the October issue of Country Living and chefs Jacques Pepin of New York, Molly Harrison of Chicago and Hugh Acheson of Georgia.

Doughnuts Are the New Cupcake?
Methinks it may be so. Check out a new spot for doughnuts Uptown, Freret Street Po-Boys (4701 Freret St., 904-9636), along with old favorites like Baker’s Dozen on Jefferson Highway at Causeway (only open until 10:30 a.m. daily), Sweet Savor’s in Gentilly (they make old-school “sinkers” too) and Nonna Randazzo’s Italian Bakery in Covington. And, of course, look for Krispy Kreme’s October doughnut: Glazed Pumpkin Spice.

Ch…Ch…Ch…Changes
Tee Eva’s has moved to a new location on Magazine Street, where the former New York Pizza used to be, at 5201 Magazine St. Speaking of swapping spots, New York Pizza is now in the location that was once Storyville at Napoleon and Magazine.

Italian Invasion
New Orleans is enjoying a renaissance of Italian restaurants that are more traditional than Creole-Italian in nature. Nonna Mia on Esplanade Avenue has a fairly routine list of Italian standards—pasta, pizza, panini, calzones and more—but the clear favorite is the crisp-crusted Tuscan pizza that begins with a garlic sauce and layering of pancetta, sun-dried tomatoes, goat cheese and mozzarella. I’m partial to the Roma, a wheel topped by prosciutto, Roma tomatoes, greens and fresh mozzarella with extra-virgin olive oil. While on the subject of pizza, Theo’s, the Magazine Street place known for über-thin-crusted pizza, has opened a second location, at 4024 Canal St., in Mid-City.

While its not specifically known for pizza, Domenica, John Besh’s latest dining venture helmed by super-talented executive chef Alon Shaya, is drawing raves for the wood-fired pizzas generously topped with superior house-cured meats, cheese and vegetables. Chef Alon and his staff are also preparing handmade pastas, risottos, meats, locally raised fowl, seafood and, in short, ensuring that we all get a taste of his almost yearlong culinary adventure in northern Italy in preparation for this restaurant’s launch.

Finally, what was Hipstix on Tchoupitoulas in the Warehouse District will soon be Adolfo Garcia’s latest venture with longtime sous chef Josh Smith, to be called A Mano (“by hand”). The two explain that their highly anticipated, soon-to open (if not already open) Italian trattoria will be a place with “a small but targeted menu, nothing set in stone; some pastas, some entrees and a lot of salumi.” Don’t expect local favorites like veal parm or meatballs; he’s going “Italian Italian, not New Orleans Italian.”

First Meal of the Day
Breakfast has exploded on the New Orleans culinary landscape. Where there once were only a few eateries to get a good, solid morning meal, diners now have many choices. Adding to the list is the opening of Coulis, chef James Leeming’s café in the former Bluebird location. He intends to keep a lot of Bluebird’s menu intact, but he will also expand on the theme at both breakfast and lunch. Anyone who’s ever had his jalapeño corn cakes with pulled pork, eggs and hollandaise can sigh in relief: There will be a rendition of that and many other delectable dishes.

Cochon Butcher is without a doubt one of the best-kept secrets for breakfast. Every week there are a slew of stunning $9 meal options: bacalao (salt cod) and eggs with shoestring potatoes; the Butcher Breakfast of eggs and house-cured bacon; omelets; fried chicken on a biscuit with caramelized onions and cheddar; grit cakes with homemade andouille, eggs and hollandaise. Do I make you hungry, baby, do I?

If you’re like me, you’re always on the hunt for unique breakfast items. Another recent discovery is breakfast at Jager Haus, where there are fairly obvious dishes like Oma’s Eggs, a casserole of eggs, au gratin potatoes, ham, cheese and a topping of onions, peppers and bacon, served with tomatoes, cucumbers and toast, and wild options like a savory, Swiss-cheese-blanketed marble rye German Toast. You can also try one of these two top picks: Shepherd’s Breakfast, a fresh tomato, cucumber, onion and blue cheese in balsamic dressing, served with scrambled or sunny-side up eggs and toast, or Breakfast Spatzle, grilled spatzle (small pasta dumpling knots) covered in Emmentaler cheese and bacon.

In Food View
I have joined WDSU’s 4 p.m. news team to feature our divine dining scene in a weekly segment called “Table for 6,” airing every Thursday.

And if you haven’t yet joined the Twitter nation (follow me @LorinGaudin), this may tempt you: Many local restaurants and chefs are posting menu specials, personal dining experiences, peeks into their kitchens, photographs and other tasty tidbits. Along with Twitter, I’m hooked on chef-baker pal Lisa Barbato’s blog called Breaking Bread With Lisa (http://breakingbread-lisa.blogspot.com/), where she chronicles her delicious adventures in cooking and baking with recipes.

124
previous Out of the Blues
next The Latest and Greatest