575
0
575
Project Runway’s Jack Mackenroth on his Halloween escapades, HIV activism and what he thinks of the latest season of the hit reality show 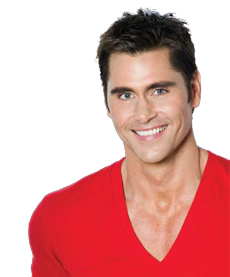 Jack Mackenroth is no fashion victim. Yes, Project Runway fans may remember him as the HIV-positive contestant who bowed out early due to an MRSA infection, but since then, the handsome (and openly gay) menswear designer has been making a name for himself well beyond the show. He’s had a featured cameo in the Sex and the City movie, served as a fashion correspondent, a competitive swimmer in the Out Games and a national spokesman for Living Positive By Design, a campaign that fights the stigma associated with HIV.
Mackenroth, who has been HIV positive for 20 years, came to New Orleans recently to support the 20th Annual NO/AIDS Walk and to talk about why it’s important for people to be more open and engaged when it comes to HIV treatment and prevention. The issue is especially important for New Orleans, which recently ranked second in the nation for AIDS case rates among large cities.
You were pretty upfront on Project Runway about being HIV positive. Were you worried it would be made into a big deal?
Not really. I was really open. And the producers do crazy background checks. I didn’t go into it saying, “I’m gong to be the new HIV spokesperson.” But I found I could do a lot of good for the HIV community by putting a face on it.
Tell us about Living Positive By Design.
Basically, it is a partnership with Merck, and it’s directed mainly to HIV positive individuals. It’s about fighting the stigma that surrounds HIV through visibility and through conversation. We advocate that HIVpositive people have a conversation with their physician and get on treatments that are tolerable and that they will keep taking and that gets the virus at undetectable levels. It’s really just a call to action for HIVpositive people to be their own health-care advocates.
Do you find that it’s hard for many people to be open about their status because of work or health insurance situations and the perceived stigma?
Yes. Everyone has their own personal journey with the whole HIV experience when you find out you’re positive. It’s about battling the stigma as much as you feel comfortable doing. Unfortunately you can count on one hand the people who are in the public eye who are open about being HIV positive.
Despite treatment advances, the number of HIV infections keeps growing, especially among younger gay men. Do you think the sense of urgency about prevention is getting lost?
I think there was a huge sense of urgency in the ’80s and ’90s because it was a death sentence. It’s a double-edged sword because the better the health care gets and the better the treatment options then people think it’s not as serious and they don’t protect themselves as often. It’s one of those things that you have to keep talking about.
Okay, I’m sure everyone asks, but do you still watch Project Runway?
I’m still a huge fan. I’ve met people who have been like, “Oh, now that I’ve been on it, I don’t want to watch it anymore.” I still love it. I think it’s a great show.
What do you think of the show’s move to Los Angeles this season?
I don’t love it. The show is going back and forth now. They have already completed the next season and that was in New York. New York just has an edge. If you want to be a serious designer in the U.S., you have to move to New York.
What do you think of this season? There doesn’t seem to be any big personalities like Christian Siriano or Santino Rice.
The talent isn’t as obvious this season. I know [it’s early] but they have been all over the place. And I was surprised they had more people on this season who didn’t know anything about sewing.
Do you stay in touch with any of your Season Four cast?
I talk to Kevin Christiana almost every day. My best friends [from the show] are Kevin and Christian. Our cast got along fairly well. There are only a handful that I avoid, and I won’t mention them.
Are you still designing clothes?
Not really. After the show, a lot of opportunities came my way as far as television. I do fashion correspondence for FashionNewsLive.com. I filmed a TV pilot with Kevin Christiana from my season and then I’m filming another TV pilot in November. People don’t realize that designing your own line takes a lot of time. Plus, in this economy, launching your own line is [tough]. If I do it, I’ll do it at a time when people are actually buying clothes!
So you’ve been to New Orleans a few times. How do you like the city?
I just love it. It’s like no other city in the United States. I was here at least 10 years ago for Halloween. It was a ball. I had a blast! I basically came here to come to the French Quarter and party.
You came here for Halloween. Did you dress up?
Oh, yeah! I was a majorette. I haven’t done drag in a million years, and I used to do it for Halloween. I always did crazy costumes. So we were ’60s majorettes on crack! There were six of us, and of course, I’m always the one who has to make all the costumes. They were puffed sleeves with sequins going down them. They were really tacky and ugly and the whole thing was red and blue! So our wigs were white. We had two teased wigs and beehives with batons going through and streamers hanging down. It was quite a production. I had taken red and blue tempera paint and painted the wigs. It rained the whole night. So I was basically a lavender mess when I got back to the hotel. But it was fun.
575
previous On the Side of the Angels
next Here’s to You, Mrs. Robinson