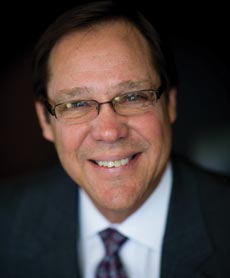 Mike Reitz officially took the reins of BlueCross BlueShield of Louisiana less than a year ago as president and CEO, but he’s had plenty of on-the-job training.

The health insurance executive has been interim president for BlueCross twice–last year and in 2004–and has 30 years’ experience with the company. And he’s seen the job from a different perspective as well. His father, Howard Reitz, served as BlueCross president from 1966 to 1983.

Despite all this experience, Reitz says the last few years have been some of his most challenging. Many of his clients are struggling to afford health insurance coverage as their incomes either fall or remain stagnant in the recession. BlueCross provides health insurance to more than 14,000 employers and approximately 175,000 individuals.

“Fighting the recession was something that was really challenging to me. I felt the pain of the marketplace as they saw the challenge of meeting their own income needs as a business,” Reitz says. “It felt really personal.”

BlueCross is a mutual insurance company, which means it’s owned by policyholders. As Reitz puts it, the company is beholden to its customers, not Wall Street. That relationship means Reitz is more likely to get an earful from clients when the company raises rates each year to keep up with rising health-care costs. Reitz is feeling the heat as companies are being squeezed by the economy, yet insurance costs aren’t letting up.

While inflation averages between 2 percent and 3.5 percent a year, health-care costs have grown about 10 percent annually, he says. “This is a crisis. Rates have gone to the point where more and more employers are beginning to opt out and creating exit strategies to get out of health insurance because they just can’t afford the premiums,” he says.

To manage increases, companies have been shifting more costs to employees by raising deductibles or reducing benefits. Reitz says many are running out of strategies to contain costs. “We have some employers who have purchased $5,000 deductible [plans] and there is nowhere else for them to go,” he says. “They have been telling us, ‘Mike, this stuff is expensive; you’ve got to stop the bleeding a bit. Help us out.’”

This unsustainable cost conundrum is the driving force behind national health-reform efforts. However, Reitz, like many in his industry, isn’t convinced that provisions in the Baucus health-care bill will solve what he calls “an affordability crisis.”

He thinks provisions in the current proposal will ultimately make insurance more expensive because they allow individuals to opt out while requiring insurers to accept anyone who signs up. That could lead to an uneven risk spread, leaving insurers with the coverage costs of the sickest without the income benefit of healthier policyholders.

He is also against proposals to cut Medicare reimbursements, as that could ultimately lead hospitals to increase costs on commercial providers to make up for the loss in revenue.

“That’s cost-shifting,” he says. “As they cut Medicare, we are going to feel that burden.” Reitz admits that there are no easy answers. He thinks that ultimately, hospitals and doctors are going to have to change the way they charge for services. Instead of the current fee-for-service model where every time a patient goes in for a test or visit, the provider bills the insurance company, perhaps there should be a more holistic approach, he says. That would include preventive care and a pay structure that focuses on maintaining health.

Keeping patients from becoming sick in the first place is one of the few guaranteed ways to reduce costs. BlueCross has launched a wellness program that’s credited with keeping its health-care cost increase to a manageable 1 percent last year.

Employees get individual counseling to go over their cholesterol, blood sugar levels, weight, exercise goals and lifestyle choices. The company’s

Reitz wants to see that success spread throughout the state. That’s why the company is one of the driving forces behind the Louisiana 2 Step program, a statewide public health campaign to get residents to take small steps–like eating healthier food and exercising more–to make a big difference in their health. Roughly 70 percent of the most common diseases in America are preventable, Reitz says. Many are linked to being overweight, smoking and a sedentary lifestyle.

Unfortunately, some bad habits start early. Louisiana has one of the highest rates of childhood obesity. The 2 Step program is moving into schools to teach kids how to develop healthy habits and, perhaps, pass them on to their parents. Reitz says research shows that parents are more likely to listen to their kids and adapt their lifestyles to keep their children healthy. “As we begin to introduce good nutritional counseling [to children], they bring that back into the house.”

But doing “the Louisiana 2” as the campaign’s slogan goes, even applies to insurance executives. How does Reitz do the two?

“Well, I’m a jogger,” he says. “I also have a lot of extracurricular activities that involve the outdoors. I have a couple of hundred acres up in Mississippi. I do a lot of log splitting and manual labor. I am always on the end of a chainsaw. And fortunately on the right end of the chainsaw.”

319
previous A Passion for Giving
next Here’s to You, Mrs. Robinson