The Fringe Festival finds New Orleans to be a perfect fit 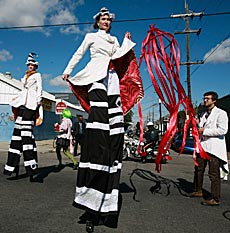 In 1947, several theater groups showed up uninvited to the Edinburgh International Festival and were turned away, deemed too quirky to participate. Undeterred, they went to the fringes of the festival site and put on their shows wherever they could. Today, Edinburgh’s Fringe Festival is the world’s biggest arts festival and has inspired performers everywhere to start up their own similar events. The United States alone has Fringe Festivals in Philadelphia, New York, San Francisco, Cincinnati, Boulder, Asheville and Orlando, among others.

Local performer Dennis Monn participated in the 2006 Minneapolis Fringe Festival and wondered why New Orleans hadn’t joined the trend long ago. A few years later he met entrepreneur and Peace Corps veteran Kristen Evans and approached her about starting a festival in New Orleans. With the help of some grants and people like volunteer coordinator Ben Moren, the two put together the first New Orleans Fringe Festival last November. It was “full to overflowing with exciting new work,” Gambit said. In addition, it generated profits and drew several thousand fans.

This year’s Fringe Festival, which takes place from November 11 to 15, has an expanded show list and takes place in a variety of venues—in the Bywater, the Marigny, St. Roch, the French Quarter, the Lower Garden District and City Park. In addition, there are perks to theatergoers, including free parties after evening performances and a street parade on November 14. New Orleans Living spoke to Executive Director Kristen Evans.

This is only the second year of the festival. You’ve built up momentum pretty quickly.

You can do so much in New Orleans [that’s] hard and expensive in other places. You couldn’t put together the festival elsewhere on such a shoestring budget and as informally as we did. . . . We’ve also had a lot of volunteers help us out, and the community organizations jumped right behind it. The local arts council gave us money when we were completely unknown and untested. Part of that is the spirit of New Orleans.

You have a unique selection process designed to give as many companies as possible a chance to put on their shows.

Twenty shows were selected by a panel, based on a few factors, including fringiness! Another ten shows were selected out of a hat. Those are the 30 shows that we present in venues we set up. In addition we have a Bring Your Own Venue (BYOV) option. If people can find a venue, they can put on their theater. They can do it in a living room, a yard—wherever they want. I love the BYOV option. It keeps the festival completely open.

There’s a large representation of New Orleans and Louisiana performers in this year’s festival, along with groups from around the country. How does it compare to last year?

Last year we had 73 applications, and it was about half local and half out of state. This year we had 106, and it also was half and half. The lineup of the official Fringe shows is about half and half, but the Bring Your Own Venue shows are almost exclusively local. I’m really excited that we have more Louisiana artists from outside of New Orleans and more groups from the South this year.

Are you using the same venues as last year?

We have some of the same venues and some new ones as well. We wanted to move things around a little bit. One really fantastic new venue is the St. Ferdinand Church. A preservationist bought it a few years ago, shored up the facade and restored it, [and] he’s renting out the space to us. Everyone in the neighborhood is dying to get into the church and see what it looks like. One of the shows that’s going to be in the venue is an opera, which should be great.

In addition to opera, you have dance performances, theater with puppets, mixed media programs, dramas, musicals.

The panel tried to create a good mix so there would be something for everyone. At the same time, we encourage people to try new things. That’s another reason all the shows are between 30 and 60 minutes and only cost $7 to see. People shouldn’t be afraid to see something they have never seen before or try something they don’t like. They’re not risking too much.

What are some highlights of the festival?

There are wonderful shows like Curiouser: An Historical Inaccuracy, about Sylvia Plath and Louis Carroll. Goats of Belle Reve is a dance piece based on A Streetcar Named Desire. Oh, and Major Swelling’s Salvation Salve Medicine Show is going to be a raucous, really fun theater piece too. I’m very much looking forward to seeing Play, Music, Heal, from Lafayette. It’s going to be a great drama.

What do you think makes New Orleans such a perfect place for a Fringe festival?

New Orleans has its own streak of fringe already. Mardi Gras Indians are street theater. Also, our parades and that kind of performance that goes on in unusual places. So in some ways fringe theater is a new thing, but in other ways it’s been here a long time.

For more information about the festival, including venue, ticket and show information, visit www.nofringe.org.