What It Means to Me 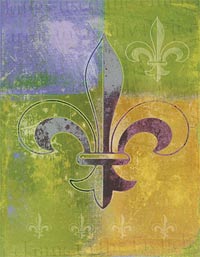 On Lundi Gras this year, my husband, Paul, and I joined part of his family at R & O’s Restaurant on Old Hammond Highway in Bucktown for an impromptu lunch. (I say “part” and “impromptu” because Paul is the youngest of seven; it’s often hard to get the whole Wegmann clan together at a restaurant without reserving an entire room in advance!) It was amazing that we were even able to secure a table at all at this busy neighborhood seafood standby, seriously packed to the gills on this festive New Orleans holiday.

During lunch, my sister-in-law Gretchen, in town from Connecticut with her sons, William and Jack, was attempting to get some conversation in with her mother, Lolita, her brother Bill and Paul and me. But it was near impossible getting the 8- and 6- year-old boys with full bellies to sit still. General rambunctiousness ensued. Several time-out trips to the corner were issued by Gretchen as the warm, bright sun continued to beckon the children to come out and play instead of hanging around listening to adults talk in a noisy restaurant.

Gretchen put Jack on her lap in an attempt to separate the brothers from waging any more Three Stooges–type antics on each other—brought on by their Uncle Bill. That’s when I noticed Jack staring at the huge silver fleur-de-lis emblem on my shirt. I have several of these highly ornamented tees, all in various colors, emblazoned with crystals and metallic studs in fleur-de-lis shapes that I’ve purchased during any number of my “Up With New Orleans” moments. And whenever I wear one around my husband’s family, my sister-in-law Sophie is always prompted to laughingly inquire if I’ve taken a Bedazzler to my wardrobe lately. That’s the level of sparkle we’re dealing with here.

Gretchen noticed Jack’s transfixion, too. She asked the boys: “Do you know what that is on Aunt Christine’s shirt?”

The hurling of cold French fries stopped. Balled-up paper napkins remained on the table instead of flying in the air and across the room. The boys were intrigued with both the question their mother had posed to them, and with the gleaming fleur-de-lis on my shirt, leading me to believe that they were indeed the highly intelligent, inquisitive children I always knew them to be.

I remember as a child seeing it on the side of the Saints’ football helmets, on numerous wrought iron fences around the city, and on commercial envelopes—perhaps from Greater New Orleans Homestead—around our house. I grew up having a comfortable familiarity with the fleur-de-lis, always associating it with the City of New Orleans.

With such a proliferation of the noble fleur-de-lis readily available in all shapes, sizes and manifestations, I worried for a moment that we could find ourselves up to our necks in fleur-de-lis decor. I thought back to the days when my friend Lynn would tell everyone how crazy she was for pigs, and for years she’d receive an onslaught of piggy novelties for every gift-giving occasion. I recalled the night a group of friends were drinking at Lynn’s, and how we counted the plethora of pigs strewn around her home, laughing and squealing as we came upon number 227: a cast-iron, pig-shaped bacon press (oh, the irony!). Lynn eventually begged for a halting of the hogs.

But will we ever reach a saturation point with the fleur-de-lis, the beautiful shape that has taken on a heightened meaning since the devastating storms of 2005? Can we ever really have our fill of all the virtuous fleur-de-lis stands for, including a rebirth and renaissance of the city, a beacon of hope for its people, a continuing renewal of neighborhood and community pride, an indicator of strength when we thought we couldn’t possibly muster one more shred, and a reminder that life is more precious than we ever thought possible before Katrina? Will a bundt pan dotted with the noble design be the straw that breaks the camel’s back?

I say no. Go ahead and fly your fleur-de-lis flag high above your garden, and let everyone know how elated you are to be in New Orleans. And next time I’m asked what the fleur-de-lis represents, I’ve got a one-word answer: home