The Saints Enter the 2007 NFL Draft With High Hopes 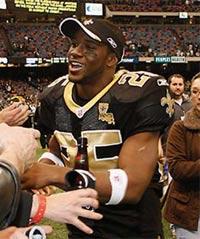 On April 28, football season rouses from its off-season hibernation and Saints fans will be on the edge of their seats to see who will be selected in the upcoming NFL draft. For those who wish to participate and get an up-close view, the Saints are expected to have their annual event at the 5800 Airline Dr. facility. The conjecture and controversy should be at its peak this year, with fan expectations high following the team’s 2006 NFC South division title and conference championship appearance. The Saints’ decision makers have earned a reputation for canny aggressiveness, and a trade-up scenario could be on the wind, making the uncertainty even more palpable. The team enters the draft with a plethora of choices, most near the last eight picks or so of each round, with selections currently slated for rounds one (27th pick), two (26th), three (25th), four (24th, 26th and 27th), five (26th), six (25th) and seven (10th). The number of mid-round picks means the Saints could feasibly trade some for a move up in the first round, adding to the potential drama.

Further, the team has moved in free agency to fill needs at free safety with Kevin Kaesviharn, at tight end with Eric Johnson and at middle linebacker with Brian Simmons. Still, fans are most anxiously hoping for a shutdown cornerback, because problems with stopping receivers, and sometimes even running backs, on big game-breaking plays were evident last year, including in the conference championship. However, it is open to debate whether those breakdowns resulted from the lack of talent, speed or skill of the starting cornerbacks, or the failure of safeties to get to the right place to make the play, or some combination of both. The team’s persistence in pursuing talent at the safety position, seemingly since day one of the current regime, perhaps answers this question best: The staff sees a strong presence up the middle as an important key to winning (arguably this philosophy has been implemented on offense as well as on defense). Thus, it is not a given that the team will draft a cornerback in the first round. It is also worth noting that the team is partly reliant on the concept that a strong passing game can help seize control of the clock and field position, and so the release of Joe Horn could generate the need for a number-two wide receiver to ensure that defenses will not overly focus on Marques Colston. The loss of only one starter, Horn, evidences a commitment of the team’s primary core to the coaches’ game plan and strategy for the future, and so the team faces what should be the enjoyable task of filling remaining needs of depth; for instance, perhaps at defensive tackle, where the loss of Hollis Thomas for four games occasionally left them at a disadvantage versus the run. Finally, last year’s draft taught all Saints fans that the scouting staff is prepared and willing to take the best player on the board no matter what college they come from and where they may be available in the draft itself.

Ultimately, it is impossible to predict who the Saints will pick and what picks or players will be traded (or what position needs will arise or be resolved) before the Big Day, but the following are summaries of some players that the 2007 Saints may be selecting first, based on the needs of cornerback and receiver and who may be available when their turn comes.

Cornerbacks: Chris Houston (Arkansas), Aaron Ross (Texas), Darrelle Revis (Pitt), Tanard Jackson (Syracuse), Marcus McCauley (Fresno State). The most likely highly ranked cornerback to be available when the Saints pick could be Houston, who fits the bill as a potential “shutdown” cornerback. He is known as a determined, combative player—if undersized and young—and played well against some of the best receivers in the NCAA last year. Ross may not be available when they pick, but if he is, he would be an optimal solution to what ailed the Saints’ defensive backfield in 2006: physical mismatches caused by size and speed. Ross is 6’1″ and can match up with the NFL’s biggest receivers; he is known for making the big play and can also return punts. Revis also fits that bill. Six foot and physical like Ross, he could also help the Saints solve their difficulties with stopping the big play. Jackson and McCauley are two other players who could be selected to fill an important need for the Saints. Both are capable cover backs who won’t be so reliant on safety help.

Each one of these players could work with Mike McKenzie to seal off the perimeter of the field by suffocating opposing receivers and quarterbacks, and hopefully generating more coverage sacks.

Wide receivers: Dwayne Bowe (LSU), Sidney Rice (South Carolina), Craig Davis (LSU), Robert Meachem (Tennessee). LSU stars Bowe and Davis are well known to fans in southeast Louisiana, having formed part of the dazzling passing offense that will likely vault JaMarcus Russell to the NFL’s top selection. If both Bowe and Davis are available, Bowe would be the more likely choice for the Saints. Bowe put in an excellent 40-yard time at the NFL combines and, given his size and speed, could be a perfect fit for the Saints’ system. Bowe and Colston would make for a nasty combination for defenses to deal with. The wildcards at receiver are Rice and Meachem, both of whom could be selected before the Saints’ pick in the mid–first round, or slip all the way to the early second. Perhaps their only deficiencies, compared to Bowe, are their slighter builds and the fact that they seemed to lack his consistency in catching well-thrown balls. As an addendum, don’t be too surprised if the Saints trade up to get the highly coveted Calvin Johnson of Georgia Tech (either using some of their extra first-day picks or Charles Grant), or if they take a chance in the later rounds on a player like David Ball of New Hampshire. Ball, who broke Jerry Rice’s career receptions touchdowns record, could be this year’s Division I-AA gift to some lucky team in the same way the Saints scored by selecting Colston in the seventh round last year.