Buzz, buzz, buzz … Yes, we have had some busy little bees and congratulatory kudos are in order!

Artist and philanthropist George Rodrigue is at it again. Bringing 250 national Blue Dog collectors into the city for his second annual Rollin’ on the River, which included a two-day cruise, a Cajun fais do-do, Houmas House plantation luncheon, Mardi Gras ball and a soiree at the Omni Royal Orleans. The coup de grace was a surprise birthday bash at the Cabildo for wife Wendy and 400 guests. George’s “Blue Dog in a Saints Shirt” percentage of sales topped over $1,000,000 in hurricane relief; and this is only one of his relief efforts. Check out bluedogrelief.com for more information. What a guy!

Remember André de La Barre and Terry Cambise, the legendary planners of Leslie Stokes’ birthday bash that you read about in last month’s Buzz? Well, they put together 30 of their nearest and dearest from New Orleans and Natchez for a post–Mardi Gras cruise on the Royal Caribbean’s Grandeur of the Seas. According to mother Mary de La Barre, the partying between Grand Cayman, Costa Maya and Cozumel was nonstop, and now it’s Opera Ball patron chair for her. The ball is slated for April 28. Thank you Betty Brooks Doss for your Opera Challenge grant of $100,000. Kudos to you, too! 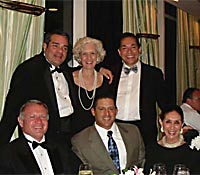 Look again! Shaney Cefalu and Cheryl Mintz, chairs for the New Orleans Ballet Moulin Rouge Gala to be held June 1 at the Republic nightclub, are in a dither orchestrating a very innovative event. Terry and Henri Hall are hosting their Benefactor Party at their new Old Metairie manse (a must-see) where Vavavoom, named the best up-and-coming jazz group in the city, will be showcasing its French Gypsy Jazz Ensemble and vocalists for the generous ballet supporters. You can also catch the ensemble at Mimi’s and the Spotted Cat in the Marigny, as well as at Windsor Court Hotel where GM Ashish Verma faithfully promotes our local music artists.

For the next edition of Buzz, be sure to give me the scoop! Tout a l’heure.

523
previous The Fabulous Fleur-de-lis:
next How Do I Lose Those Post-Baby Pounds?