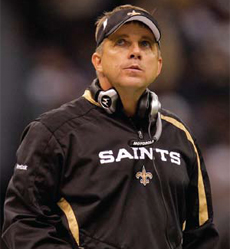 The Saints and their city find themselves in uncharted territory–unbeaten, leading the league in scoring margin, relentlessly profiting off other teams offensively and defensively, flashing huge plays, garnering national attention–and fans are wondering how it will all end. Amid talk of an undefeated season (which may or may not survive the Patriots game) and even (with audible gasps) a possible Super Bowl appearance, certainly memories of past disappointments linger over the Dome like storm clouds in the distance. Even the most die-hard fans must be wondering whether a franchise that has featured so much mediocrity in its past can really rise to the top of the American sports world. So far it has. Like all great stories of adventures into unmapped frontiers, the Saints and their fans find themselves in the middle of an epic that will only reveal itself one moment at a time.
Challenges abound for this very special and ambitious team. Injuries are mounting, from Billy Miller and Lance Moore, at the beginning of the season, to Reggie Bush, Jonathan Goodwin, Heath Evans and almost half the starting defense during the season, including Kendrick Clancy, Sedrick Ellis, Darren Sharper, Scott Fujita and Tracy Porter. And early game takeovers and huge rushing totals by opponents leading to deep deficits have been cause for great concern, regardless of the winning outcomes in such situations against Miami, Atlanta and Carolina. Meanwhile, the scoring totals and victory margins, though still gaudy, have narrowed. Overcoming such obstacles has only proved the Saints’ worth as a unique, destiny-laden team; for any team seeking to demonstrate its greatness must go through such things in order to do so. As Drew Brees and company have shown so often this year, a little attitude goes a long way. Fans have little doubt that the ability to come back from early debacles and stave off tenacious, upset-minded underdogs for four consecutive weeks would have been an impossibility for the franchise’s previous versions of the past four decades. In a way, should the Saints win this five-game run it may be more impressive than the opening six games, when the Saints beat the favored and supposed contenders, the Philadelphia Eagles, New York Jets and New
York Giants.
What looms ahead, like a leviathan awaiting Ahab, are the New England Patriots. The Patriots carry a veritable battalion of football weaponry, from America’s most championship-laden quarterback, Tom Brady, to perhaps the most dangerous receiver in NFL history, Randy Moss. They bring the league’s best possession receiver, Wes Welker, a model for team defense, and an assortment of perhaps as many as five capable running backs. Their offensive and defensive lines are stout, disciplined, unwavering. But above all they will be led into the Dome by perhaps the greatest coach Sean Payton has ever met in his career with the Saints, Bill Belichick. Payton has been outsmarting, out-maneuvering and just plain outcoaching every head coach he has opposed this year. As proof, his team leads the league in scoring differential, a mind-boggling 134 points over their opponents in nine games. This is a result of scoring 331 points, a near league record. To give some perspective, the NFL has been in existence for ninety years and only three teams have ever exceeded the Saints’ offensive scoring pace, and one of them was the 2007 Patriots coached by Belichick. In the Patriots, the Saints will face a defense known for aggression, discipline and big plays, much like themselves; and they will face an offense that is more than capable of matching and exceeding the Saints’ hyperspeed scoring capacity.
And, in Belichick, Payton will face a coach who is known for dissecting the league’s best offenses, eliminating their advantages and exposing them as mere ephemeral gossamer. Belichick has won three Super Bowls, four conference championships, six division championships and nine first-place divisional finishes in but ten years with New England. Clearly, the kind of performances the Saints have put in recently for the Miami through St. Louis games were gutsy and victorious, but they will not remotely suffice against the Patriots. The Patriots are the kind of franchise the Saints aspire to be.
Saints fans will get a preview of whether their team, in its most supreme season, has the strength, depth, toughness, quickness and intellect to beat the league’s premier, winningest franchise in a playoff-like atmosphere. The nation will be watching this massive tilt on Monday Night Football. The pressure will be on, the Dome will be packed to its cavernous roof and Sean Payton will be in for the coaching test of his life. A 10–0 start, or rather its very legitimacy, may be on the line. Even though the Saints have a fairly promising schedule after the Patriots—with three mediocre to poor teams (Washington, Carolina and Tampa Bay) sandwiching two winning but inconsistent teams (Atlanta and Dallas)—a playoff season is almost certain, a division championship is likely and home-field advantage leading to a conference championship is a very real possibility.
How the Saints face the adversity of their own recent shortcomings coupled with the mental, emotional and physical peak that the Patriots game presents will say much about what this team will be able to accomplish in the postseason. What is certain is that the fans themselves will pour every ounce of energy into what may be the very biggest regular season game they and their team have ever seen; and if the Saints do so
as well, they will finally transcend their past. Maybe one day it will be said that before the Patriots game, the Saints were never an elite team, but afterward, should the Saints win, it will be said that that was the moment they finally arrived.
87
previous Sharper Image
next More Than Perfect