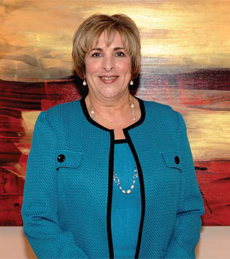 Just as specialty shops can still thrive in a marketplace of big-box stores, small hospitals can find a successful niche in a health-care landscape characterized by enormous medical centers. The average number of beds per hospital in the United States is about 160, and some major New Orleans–area hospitals contain more than 400. Meanwhile, Omega Hospital in Metairie is much cozier with only 16 beds.
“Our concept is to offer a facility where patients can receive top-notch surgical care,” says Deborah Schenck, Omega Hospital’s administrator. “We want our patients to feel special, and we treat them as family members. The individualized care we offer is the best thing about Omega.”
Indeed, in many ways Omega Hospital resembles a luxury hotel more than it does a medical center. Robes hang in the closets. Room amenities include a flat-screen TV with a DVD player, a coffeemaker, minibar and microwave. Waiting areas feature plush, velvety couches with matching armchairs in the patient rooms. All these rooms are private, since the hospital believes sharing rooms with other ill people can lower patients’ spirits and impede recovery. But each includes a second bed for a loved one to stay in overnight in order to provide comfort to the patient. Meanwhile, the nurse-to-patient ratio is only one to two, much lower than in most hospitals.
All this luxury might sound ultra-exclusive, but Schenck says it’s accessible. Most insurance carriers cover stays at Omega Hospital just as they would any other hospital. “Our fees are the same or lower than elsewhere,” Schenck points out. “We’re small, so we can do cost containment.”
With its modest size, Omega Hospital does not attempt to be a health-care one-stop shop. Containing four operating-room suites, it strictly offers surgical procedures, including preoperative testing. The hospital was originally geared only to women, and it is still renowned for its pioneering work in most surgeries, which draws patients from across the country and the world. Around 2001, its repertoire expanded from gynecological and plastic surgery to embrace other types of operations.
“Gynecological surgeries now account for 5 percent of our work. Over half is orthopaedic surgery,” says Schenck. “We do more of that now than anything else. And we just started ENT surgeries, or ear, nose and throat. Something new is always being added.”
“The physicians on staff work at other hospitals but prefer Omega because of our first-class equipment,” Schenck comments. “And we cater to them. If they want to schedule a surgery at 8 a.m., they can. We have no emergency room, so they won’t ever be bumped at the last minute. Everything flows well.” Omega is a physician-owned hospital; the doctors feel they have more control in dealing with their patients. According to Schenck, physicianowned hospitals are on the rise nationally, because doctors are frustrated by corporate health care. When physicians are in charge, they have more say about available treatments, supplies and how they practice medicine. Schenck is a big advocate of smaller hospitals in general. According to her, the individualized care helps patients recover quicker, compact facilities are easier to keep clean and administrators can be more hands-on and get decisions made quickly.
“In larger hospitals, some top administrators stay at their desks all day, and decisions have to go through multiple people,” she says. “Those organizations can be top heavy, but here, it’s just me, answering to the CEO. I’m always moving about the facility. I have strong support staff, but I am responsible for the hospital. That includes marketing, recruiting physicians, managing all personnel and ordering equipment.” She emphasizes, however, that it takes teamwork to make the Omega dream work. “One of the things I enjoy most about my job is working closely with Dr. Eric George, the CEO and medical director of Omega Hospital. I believe we make a great team devoted to recruiting the top physicians in the area and maintaining a top-notch health-care facility. Not only have we surrounded ourselves with leading physicians, but we have a team of great employees as well. At Omega everyone works as a team to contribute to the overall success of the hospital.”
A native of New Orleans, Schenck has more than 35 years of experience in health care. She first started as an X-ray and ultrasound tech and gradually worked her way up to supervisory and administrative roles. And she’s been with Omega Hospital a long time, in fact, before the organization had its own hospital. When it started over two decades ago, the Omega Institute, as it was known then, leased office space, which included rooms to perform diagnostic testing. But surgeries were done elsewhere. The original founder, who was a pioneer in his field, named the group Omega after the last letter of the Greek alphabet, because his patients tended to find him at the end of a long, frustrating search for the procedures they needed.
In the late 1980s, the institute opened up a surgery center in the Galleria, and then Omega Hospital, which can easily be spotted on the north side of I-10 when driving west, opened in 1999 with ten beds. Six more were added later. “There’s always room for more growth, but our main goals are to keep up with the latest surgical techniques and equipment and to always cater to our patients’ comfort in recovery,” says Schenck.
281
previous 5 Habits That Lead to Plaque on Your Teeth
next Don’t let the holidays stress you out