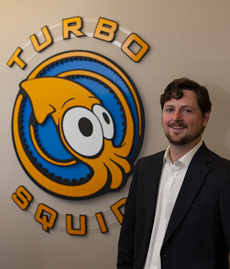 Louis Cathedral in a book, he could fly a photographer down to New Orleans to snap one or search for a qualified local to do it. Or for less money and effort, he could simply buy a stock photo from an image licensing company.
Stock photography is an apt metaphor for understanding the business of TurboSquid, an Internet firm located in the Arts District. But instead of stock photography, TurboSquid’s business is 3-D computer models. “Our clients range from Pixar to CNN, from the Marine Corps to Electronic Arts,” says Matt Wisdom, the CEO of TurboSquid. “The Daily Show just made a big order a few days ago. You may not be aware of it, but you’re seeing imagery all the time from TurboSquid in one way or another.”
For example, Pixar needed an Eiffel Tower for Parisian scenes in the movie Ratatouille, but instead of designing a 3-D model of the structure from scratch, the animators purchased one through TurboSquid. The outsourced Eiffel Tower allowed them to direct more of their creative resources to a gastronomic rat named Remy.
“Some of our clients don’t want to waste time rebuilding stuff that’s already been done. They can focus their attention on something new,” Wisdom says. “Sometimes they’ll buy 3-D models up front to make production easier, but others turn to us when they find themselves under a crushing deadline. Customers have said they save 23 hours of work time from each purchase.”
Architecture firms buy people, trees and furniture to liven up the computer models of their buildings. News agencies use TurboSquid’s 3-D images for reenactment montages. Video game companies pick out sports cars for their pumped-up action heroes to drive. Military agencies buy models of guns, bombs and military camps to assist with solider training.
TurboSquid doesn’t actually create or even really sell any of the 3-D models on its Web site. Like eBay, TurboSquid is an online marketplace that connects buyers and sellers and earns revenue from commissions off each sale. TurboSquid’s role is operating the Web site and its e-commerce functions, maintaining standards and helping with any technical or customer relations problems that may come up. As a result, the New Orleans company finds itself at the crossroads of a vibrant international community.
About half the company’s sales come from outside the United States, and while some of the creators of the 3-D images who sell their work on TurboSquid are American, others might live in Brazil, the Czech Republic or Siberia. Sometimes the sellers are students who use their TurboSquid income to pay their way through college. Other sellers exclusively rely on TurboSquid to support them and their families.
“If we make a change on the Web site, we hear from our sellers, because this might be their entire livelihood,” Wisdom says. “But I find that gratifying. We’ve created something that allows other artists to live well and be their own bosses.”
Yes, Wisdom used to consider himself a 3-D artist, too, although now he spends his time running TurboSquid’s operations and managing its 35 employees. His interest in computers began at age 8 when he took to programming his Apple II+ with the help of a teacher. Much later, Wisdom had a small business in which lawyers would contract him to develop computer videos to animate their cases; noticing the need for premade 3-D imagery, he started TurboSquid in 2001.
“I took a number of classes in programming, but I didn’t major in it. I’m an unapologetic liberal arts major who loved studying history,” says Wisdom, who believes his history degree from Brown University provided a good foundation for operating a business. “It’s critical thought. You learn to look at facts, assess what’s right and build from there.”
As one of the larger and more established tech firms in the city, Wisdom’s company has become a leading light of New Orleans’ energetic small-business community. A high-profile cover story on New Orleans entrepreneurial culture in the August 2009 issue of Entrepreneur mentions TurboSquid in the second paragraph. That article triggered related news pieces in USA Today, on CNN and elsewhere.
“I always wanted there to be entrepreneurial community here, and those stories made it real,” says Wisdom, who attended Country Day School, in Metairie. “New Orleans is now becoming known as an entrepreneurial city. A venture capitalist recently wrote me to ask if I was seeking investment. That was the first time I saw active prospecting.”
“We love the lifestyle of New Orleans, and TurboSquid can shine and be special here,” he adds. “Our New Orleans location has helped attract and keep great staff. About three years ago, we had pressure from potential investors who wanted us to move to either Boston or Silicon Valley, but we found investment locally and stayed put.”
The company’s success means that it has dozens of imitators trying to replicate its business, but TurboSquid is far and away the leader of its market category. Its success also means it frequently receives offers from other companies wishing to buy it.
“People come knocking on the door, but I’m not looking to sell the company,” Wisdom says. “You see 3-D everywhere. The big opportunities are still in front of us, and I want to watch that develop.”
305
previous Smokin’ Hot
next Fair and Balanced