3.06K
0
3.06K
The Battle of New Orleans Anniversary commemorates a piece of Chalmette’s–and the nation’s–history each year 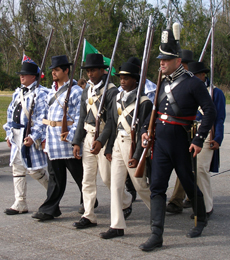 On January 8, 1815, the Battle of New Orleans was fought and won on Chalmette Battlefield. An overmatched United States Army triumphed over Britain in the battle, the culmination of the War of 1812. The war marked a milestone in our country’s movement toward both national unity and international power.
The proud residents of St. Bernard have never forgotten this important part of their heritage. On January 8 and 9, the Jean Lafitte Historical National Park and Preserve, which includes both the 125-acre Chalmette Battlefield and Chalmette National Cemetery, commemorates the event with its annual Battle of New Orleans Anniversary. The activities include a reenactment of the December 23, 1814, skirmish, which took place downriver and set off the Battle of New Orleans, and on Saturday, several 90-minute Lantern Tours of the site as it might have looked the night before the battle. Throughout the event, reenactors will be in period attire, camping and cooking will take place on the battlefield and questions will be answered about the war. Except for the tours, which cost $5, everything is free. Recently New Orleans Living spoke with Park Ranger Kristy Wallisch about this popular event.
Why was the Battle of New Orleans so important?

New Orleans [would give the victor] control of the entire Mississippi River Valley. The rivers of our country were like the interstate is today. That’s how everybody in Ohio and Missouri and all the way up north got their goods to other places–down the Mississippi through New Orleans and out into the Gulf and up to New York or to Baltimore.
There was enormous diversity among the troops and noncombat workers. Women also had a big role on the home front. Do you depict this?

We have a group of women and some men who portray civilians, and a civilian camp at the battlefield so folks can get an idea of how noncombatants helped behind the scenes. You’re also right; it was an astonishingly diverse army. There were well-to-do Creole businessmen from New Orleans and militiamen from Kentucky and Tennessee. There were two battalions made of free men of color. Part of Jackson’s genius was that he was able to convince all these people to work together for a common cause.
Was everyone on board with this goal?

There was some hesitation on the part of the city fathers about arming nonwhite combatants. But Jackson insisted that it was everybody’s fight. Today the nation has come to realize that you need contributions from everybody. Andrew Jackson was way ahead of his time, because he realized that everyone had something to contribute.
There isn’t an actual reenactment of the battle?

We reenact the December 23 skirmish on Friday night. But on park service ground, where the battle actually happened, we don’t reenact the Battle of New Orleans. It’s very hard on the resource. Also, hundreds of people died here, and you don’t want to turn it into a spectacle.
How many participants are involved?

We’ll have over 100 reenactors, all volunteers. We have a British and an American camp commander who work closely with us. We’re very demanding as far as authenticity goes. You’ve got to have the right uniform, the right weapons. You also need a good understanding of the regiment you’re portraying, what role they played, a possible personal history for your character.
Do the reenactors stay in character throughout?

Yes. They are so convincing that some younger visitors leave with the impression that they actually fought in the battle. They’re too young to understand how long 200 years ago was.
You have a lot planned specifically for children.

Friday is our school field trip day. We usually get around 2,500 kids on field trips. Saturday is a big day for families. The younger visitors really enjoy it. We also have special kids camps where they have smaller sizes of the uniforms for the kids to try on.
St. Bernard Parish was so devastated by Katrina. Were you able to go forward in 2006?

We thought there was no way we could pull this off in 2006. But the people of St. Bernard Parish came to us and said, “We’ve had such a horrible few months. Can we do something?” So we pulled together a one-day event. We had no running water, no power. We had to shut down as soon as it got dark, and we had all port-olets and no flush toilets. But it actually was my favorite Battle of New Orleans ever. It was this great reunion, with people you worked with for years and people you’ve seen coming for years.
Any closing thoughts?

The Battle of New Orleans was such a nationbuilding event. The Revolutionary War had been almost 40 years [prior]. By the time of the battle, people identified themselves with their state more than with the Union. Until the Civil War, when division once again reared its ugly head, the Battle of New Orleans was considered second only to July 4 as a national holiday.
For more information about the Anniversary and the Creole Queen’s visits, firing demonstrations by “pirates” and events at the Malus-Beauregard House, among other activities held throughout the year, check out the park’s web site, www.nps.gov/jela.
3.06K
previous Dream Team
next Worth a Thousand Words … and More