Saints and the City

80
0
80
Determination and fate deliver a super win and, finally, redemption
On the evening of Sunday, January 24, 2010, something unique happened:
A city changed overnight. 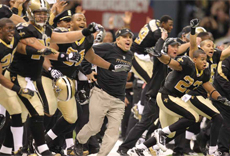 As though held in a decades-long trance, the people of New Orleans were released by an event that had seemed unfathomable, impossible and so contrary to the city’s worldview that their very being shook by its occurrence. Before their very eyes, the New Orleans Saints football club– the object of the city’s haplessly hopeful but unrequited love affair since 1967–became the NFL’s National Football Conference Champions and the once inconceivable is now fact: The Saints are in the Super Bowl!
As Garrett Hartley’s booming, dead-center, perfect kick pierced the virtual fleur-de-lis heart of the goalposts with 10:15 remaining in overtime, a momentary gasp of wonder rose from the Superdome’s record crowd of 71,276. It was like the almost imperceptible hush between the cocking of a gun and the explosion of its bullet. So many times before, the fates had aligned against the Saints and their fans–so many crushing blows, so many heartfelt disappointments, so many crucial mistakes at the most crucial of times–all were shattered by the foot of a young kicker who had wound his way to New Orleans by virtue of a strange journey via Oklahoma and Texas.
Like so many of the current Saints players, he had arrived in New Orleans through a combination of happenstance and skillful management: When a highly prized draft pick failed to deliver for the Saints as expected and was suddenly cut (Taylor Mehlhaff), the undrafted, unsigned Hartley was picked up by a Saints staff that has shown such a keen eye for talent. It was perfectly fitting that he should be the one to come through in the clutch.
After the kick met its mark, the crowd reverberated with joy. Genuine tears flowed, brothers and sisters of the Who Dat Nation hugged one another and the celebration began. Once the Halas Trophy had been surreally hoisted by Drew Brees, Sean Payton, Deuce McAllister and Tom Benson, the people poured out of the Dome into the cool night air. Fans seemed lost in themselves and in one another, staring at the scene before them in almost disembodied disbelief. Some seemed peaceful, some yelled to the skies, but all shared a secret smile with their fellows, gradually moving forward like the Mississippi River down Poydras and Girod into the French Quarter and the Warehouse District. This river of exaltation and carnival-like energy has always coursed through New Orleans, like the River itself, but now the citizens were present in it and belonged in it, aware of the very fact of it and what they, with the team, had accomplished. Saints fans knew that, in what was the city’s first NFL Conference Championship, they had essentially willed their team to victory in what had become the tensest of all Saints games. And as much as the Atlanta Falcons game in the Superdome in 2006 was about exclaiming to the country and the world that New Orleans had survived and was indeed still here, this game was about showing the country and the world that New Orleans had prevailed.
Throughout the game, the fans showed an indefatigable resiliency and determination to stay on future Hall of Famer Brett Favre and his

Minnesota Vikings with a constant, mind-riveting din. Vocal chords strained, lungs burst. It is difficult to imagine past Saints crowds chanting the intimidating roar “Here We Come to Get You” the way this crowd did, unleashing every bit of fury they had in reserves. A classic NFL game was born, one in which glory was won and legends were created; one in which a season of “sweat and strife” reached its crescendo. Like two heavyweights pummeling each other, after a seesaw battle of wills with the Saints and Vikings constantly daring each other while never yielding, Hartley’s kick finished the matter in an instant. After a 28–28 mammoth tilt leading to sudden-death overtime, the Saints won the championship 31–28. Before that moment, it seemed that the citizens of New Orleans were determined
to reverse course. No longer would they fail, no longer would they lose, no longer would they be disappointed by unseen fates. The past, present and future came together and the team and its fans, the city and its citizens were winners. For a people who harbored and treasured whole troves of kernels of quixotically heroic events in the midst of lost seasons like Tom Dempsey’s 63-yard kick, John
Gilliam’s inaugural scoring kickoff return, the arrival of Bum Phillips and Jim Mora’s Dome Patrol defenses, the release was palpable and defining. The Saints had been hanging on a precipice for hours and that kick cut the binds of despair with a shockingly swift, devastating, easy stroke, as though a medieval samurai had personally intervened to settle an irresolvable dispute by executing one of the parties–the Vikings.

As the people transformed the team, the team transformed the people. In the midst of a political season in which division has been oft discussed and sometimes preached, there was a smile of unity, a simultaneous understanding of common achievement. In a season of financial difficulty, the Saints’ playoff run generated an engine of money-spending, resulting in a boon to restaurants, hotels,
stores selling Saints merchandise, street vendors and businesses of all kinds. By the end of the Super Bowl, the city’s coffers might
just flow to such an extent that several much-needed programs will now be funded.
But more than that, something may have changed in the perspective of the citizens. The calm, confident glow that pervaded the smiling faces that left the Superdome that night will know evermore that they will not need to be haunted by the failures and the disappointments of the past. This victory will be something they can take with them. History changed, and they did as well. Whereas in seasons past the fates had militated against the Saints, throughout the 2009 season good things happened repeatedly–balls bounced the right way, opposing teams missed field goals from absurdly short ranges, opposing coaches made bizarre calls at the most inopportune times—to such an extent that perhaps the fans’ attitude changed and that led to exponentially raised expectations for the fans and team alike. Both seemed to carry each other down the river of hope that ultimately swept out of the Superdome after the defeat of the Vikings.
Most remarkably, in an age of free agency and cynicism toward the old concepts of competitive spirit and loyalty by pro teams to their fans, this team, to the credit of general manager Mickey Loomis and head coach Sean Payton, has consisted of bright, hard-working, and, yes, nice underdogs that any city would be proud to have representing them. But they supremely fit New Orleans. From the true hero of the city, quarterback Drew Brees, to the symbol of the ultimate underrated draft pick, Marques Colston, to the flashy all-American everyone said could never fit in (but did and so much more), Reggie Bush, to a solid offensive line that, in its current form, does not have a single first-round draft pick starting on it, and so many of the other castoffs (Jonathan Vilma, Darren Sharper, Jeremy Shockey), overlooked (Pierre Thomas) and underrated (Devery Henderson, Thomas Morstead) that form the core of the team, the Saints, like the city, have been told repeatedly that they does not belong in the Big Game, that they don’t have what it takes. Now they have earned it, they have finished strong, and they are, in fact, in the Big Game. By virtue of its small market size, the Saints are not supposed to be able to compete with the New York Giants and the Boston Patriots of the NFL. But clearly that has been refuted, and so should the notion that the city cannot compete with larger cities like Houston and Atlanta, especially if all it takes is attitude and leadership combined with an overwhelming desire and capacity to kick tail when called upon.
So much had to happen to swing the winds of fate in the Saints’ favor: meeting their playoff nemesis, the Minnesota Vikings, and overcoming them in crushing overtime fashion; facing a gutclenching, potentially devastating blow in the form of Reggie Bush’s fumble deep in his own territory and overcoming that (when Viking football greats Brett Favre and Adrian Peterson inexplicably fumbled the ball on a confused hand-off exchange on the very next series); overcoming glaring penalties against them by finally getting the payoff of one in their favor just when they needed it right at the end (the interference call on the overtime pass to David Thomas); staring down the barrel of Favre’s laser-guided arm aimed by his iron nerves in a sure-to-havebeen classic final two-minute drive only to witness the unbelievable, an unforced error in the form of a five-yard penalty for twelve men in the huddle followed by Favre’s errant delivery of what may be the last pass of his storied career into the waiting arms of Tracy Porter; and, after a divinely ordained coin toss falling just right, winning on a sudden death kick where so many since Morten Anderson had failed before. In all ways the Saints and their fans were redeemed for their faith in the only way they could be, by marching through the fire of disasters past and emerging unscathed. Redemption can be a powerful thing for a person, a team, a city and its citizens.
For all the many strange, mystical, fateful signs that have occurred through the Saints 2009 season, a final one rises on the horizon: In Super Bowl XLIV, they must defeat the Colts and their captain, Peyton Williams Manning, the son of the man Saints fans once called “the Franchise”: Elisha Archibald Manning, the man whom the Saints once drafted with the idea that he would bring hope and riches to the city, only to see so much disappointment follow. It is fitting, right and almost divinely destined that that will be the final dragon to slay in their quest for redemption. Regardless of how that ultimate challenge plays out, for once, finally, Saints fans can say this: When those fleur-de-lis-emblazoned helmets emerge on that field in Miami on February 7, 2010, they will be able to sing “When the Saints Go Marching In” with all their hearts–because they are, finally, at last. The Saints are marching into the Super Bowl!
80
previous More Than Perfect
next The We Generation