Fewer people, fewer jobs and a smaller New Orleans— so why are some businesses having their best years yet?

It was three days after Hurricane Katrina hit. The levees had broken, and the city’s future looked grim. Local clothing retailer Kerry Bruno remembers calling her vendors in a panic from Birmingham, Alabama, where she had evacuated. 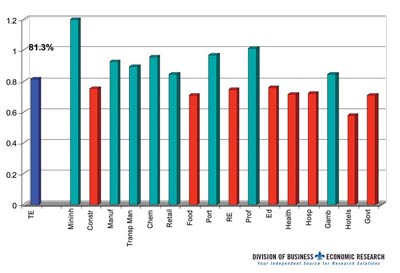 “I did a massive cancellation,” says the owner of Azby’s on Magazine Street. “I sent back over $30,000 in inventory at cost.”

She had lost all her employees, and the storm shattered her glass storefront, dumping water inside the showroom of the shop she had operated for almost two decades. She was ready to throw in the towel when she returned to a nearly empty city a month later. “I almost closed. I was 65 percent sure I was going to close except that I couldn’t get out of my lease,” she says.

Bruno reopened Azby’s nine weeks after the storm without any employees. A slow start turned around in less than a month with “phenomenal” Thanksgiving sales. “That December was my best month ever. And it never really slowed down,” Bruno says. “My summer months, which are usually dead, were still really good.”

Azby’s story, while not the norm, isn’t unique in a city struggling to recover from the nation’s worst natural disaster. Despite national media’s gloom and doom reports of the city and its smaller population, some businesses outside the construction industry are quietly growing and thriving here since the storm. Stores like Azby’s are seeing growth because there are fewer competitors, while others like architecture, law and accounting firms are taking advantage of new opportunities connected to the recovery. Some, like retailer Mignon Faget, are riding a wave of support for local businesses.

The jeweler laid off most of its employees after the storm when it didn’t have enough cash on hand to meet payroll. Almost 20 months later, it’s more than rebounded. Mignon Faget employs 90—10 more than before the storm—and sales are up 30 percent compared with pre-Katrina revenue, says Virginia Saussy, vice president of sales and marketing.

Customers, collectors and others who wanted to support New Orleans flocked to the company’s flagship Magazine Street store when it reopened in October 2005. Faget’s signature fleur-de-lis jewelry became a “badge of courage” for many coping with the recovery, Saussy says.

“What really has saved our company is the New Orleans people,” she says. “People want to support a local business.”

Even professional services such as law firms, consulting agencies and marketing companies are finding ways to bounce back in the changing New Orleans economy. Employment in professional services is back at 98 percent of pre- Katrina levels, says Janet Speyrer, director of UNO’s Division of Business and Economic Research.

“We never fell as low as we thought we fell,” says Speyrer, referring to initial reports that New Orleans had lost almost 50,000 white-collar jobs after the storm. Overall, metro employment is at
81.3 percent of pre-Katrina levels, according to UNO figures. That’s up from a low of 70 percent immediately after the storm when firms had to lay off staff and operate from satellite locations outside the city.

One of local public relations firm Deveney Communications’ biggest clients is the New Orleans Convention and Visitors Bureau and the state’s Department of Culture, Recreation and Tourism. Before the storm, the firm targeted the hospitality industry as a key growth area for business. That strategy didn’t fail despite the storm’s upheaval, says owner John Deveney.

The firm’s revenue is up 57 percent during the past 18 months, compared to the same time period before the storm; Deveney hired additional staff, growing to 13 from eight before the storm.

The firm, which also specializes in crisis communications and strategic planning, has been busy helping clients adapt to a changing market.

“Public relations is a very resilient industry,” Deveney says. “In times of turmoil when business or the economy is in trouble, frequently those are areas that public relations steps to the forefront to aid organizations in getting out of that trouble.”

In contrast, law firm Fisher & Phillips is seeing most of its growth from the regional market.

“Starting at the six months after Katrina, we have been on a climb back and have now surpassed our pre-Katrina workload,” says Keith Pyburn, regional managing partner of Fisher & Phillips.

“In other areas of the state, the economy is doing well,” Pyburn says. “Yes, some of our clients are no longer in Orleans Parish, but they moved either to Jefferson Parish, St. Tammany Parish or up the river a bit, and we are still representing them.”

The firm is also seeing client growth from local constructions firms and others new to the market that need guidance on labor issues. Pyburn says most local law firms are busier than ever since the storm, especially those involved in insurance disputes. UNO economic researcher Janet Speyrer says she too suspects that the legal community is rebounding, although state labor figures don’t specifically track that segment of the economy.

“The lawyers seem to be doing well, and we’ve heard that from a lot of sources. In fact, people in law firms have said they are still trying to hire individuals,” she says.

211
previous Chartered Waters
next He's Got the Look