Ochsner gets national recognition for its exceptional service 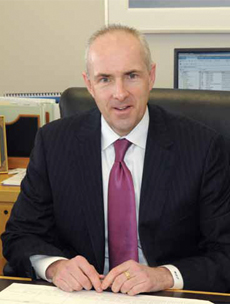 Ochsner Health System, the largest health-care organization in Louisiana, continues to make its presence known on a national level. Most recently, Ochsner’s main campus was ranked in the top 5 percent of hospitals for exceptional care by HealthGrades, an independent ratings group based in Colorado. It is the only hospital in our state to receive this recognition. The criteria for this particular prize, the full name being the HealthGrades Distinguished Hospitals for Clinical Excellence Award, concern complications and risk-adjusted mortality rates. Obviously, the fewer complications and the lower the mortality rates in a health-care institution, the higher the ranking it receives. For its analysis, HealthGrades used publicly available Medicare data.

According to Warner Thomas, the president and CEO of Ochsner, preventing complications in a clinical setting is a broad task. “It can concern the timing of treatments,” he says. “It can be a matter of maintaining a clean environment. And there are measures on how to prepare someone for surgery, protocols on how we handle a cardiac patient.”

“When in the middle of the night a patient helps himself out of bed, falls and gets injured, that’s also considered a complication. In that area, nurses have been working on preventing patient falls through education and communication.”

Overall, Thomas credits a new determination inside the organization as a reason Ochsner has received this annual award for the first time. “Certainly post-Katrina, our medical team has spent time rebuilding the medical group,” he says. “We’ve done a good job recruiting national-caliber physicians. Secondly, we’ve started working on root cause analyses of mortality and complications.”

He adds, “I would say we’ve always been focused on clinical care and doing a great job, but this idea that our goal should be to become the absolute best in the country, it’s a renewed focus for us.” In addition, U.S. News & World Report ranked Ochsner among the country’s 50 best hospitals for 2009–2010 in three specialties: heart and heart surgery, urology and ENT (ear, nose and throat) services. Thomas says the health-care organization has been seeing an increase in out-of-town patients, defined as those coming in from a greater-than-50-mile radius. In particular, transplant operations, cardiac disease treatments and cancer treatments are important national draws.

Thomas credits Ochsner’s group practice model as an instrumental reason behind its success. Group practice is an integrated approach to medical care in which a team of doctors manages each patient together. “Some doctors like it, others don’t. It’s less entrepreneurial than the traditional model for medical care,” he says. “For it to work, we have to provide incentives. Employees receive bonuses based on how they perform in certain areas. We look at doctors on patient satisfaction, access measures and how many patients they see. We care about how well they work in a group and if they’re good team members.”

In the health-care debate, “accountable care organizations” has become a current buzz phrase for hospitals that are structured around the grouppractice model, but Ochsner has always used it. It was actually pioneered by Mayo Clinic, the renowned health-care group in Minnesota, and the headlines when Ochsner first opened in New Orleans in 1942 read “Mayo Clinic Comes South.”

“Group practice has aided us in achieving our national rankings,” Thomas says. “I haven’t looked at the list of other hospitals that received the HealthGrades award, but my guess is you’ll see a lot of institutions like this.”

When the news that Matt Murphy, the chef at the Ritz-Carlton and a new father of quadruplets, had fallen ill with a rare, life-threatening disease, the local restaurant industry and fans of the chef rallied with fundraisers and support. After 16 surgeries over three months at Ochsner, he was eventually able to return to work. According to Ochsner, Murphy’s treatment required 10 teams of medical specialists, and the protocols in place, because of the group practice model, are what allowed for effective coordination of Murphy’s care.

This system of teamwork entails the sharing of medical records, and Ochsner uses electronic versions that every doctor on a team can modify. In the medical world, Electronic Medical Records (EMRs) have been receiving increased attention and funding, and one day each patient’s EMR is expected to be shared among every doctor in his or her life. As of yet, standards for sharing EMRs across different practices don’t exist. Still, they came in handy for Ochsner’s New Orleans patients when they evacuated to Baton Rouge for Hurricane Katrina. The doctors there could easily access medical histories.

Ochsner’s EMRs will also be available at the new Slidell facility. The healthcare organization purchased the Northshore Regional Center and will be changing the name on April 1.

“We have nearly 100 physicians on the Northshore, and we were looking for hospitals in the same market that we have physicians,” says Thomas. “We saw this acquisition as a way to grow our model in Slidell. We also hope to pull patients from the Mississippi market and then expand in Slidell with new specialties.” n