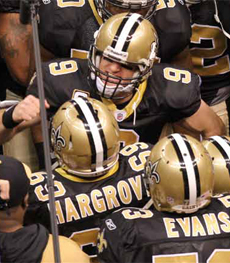 It was the rhetorical question heard round the world. As Darren Sharper ran back the game-ending interception for a touchdown, the messages started coming in, too. A call from my brother in Brooklyn: “Who Dat?!”

A text from my in-law in Denmark: “Who Dat?!” An e-mail from a friend in Australia: “Who Dat?!” Back at home, our 3-year old was running in circles yelling “Who Dat?!” (And, somewhat less endearingly, “Stand up and get crunk!”)

My response to each of them–every rhetorical question deserves a response– was, “We Dat.” If the Saints are a metaphor for a resurgent New Orleans, it is because they epitomize what has lifted our region over the past four years: a remarkably broad and committed effort, where every day brings a different savior, a different star. In this game it was the sensational Sharper; last game it was the unheralded Garrett Hartley and his game-winning field goal.

The point is, the Saints are clearly a team of “we”; it is their collective talent and selflessness that has taken them from well-documented lows to celebrated new heights. This is why everyone, from presidents to residents, loves the Saints. They are a team of “we”–and so is our region.

Economic development is about quality jobs and quality of life. And if you look at our region’s wins in this arena over the past few years, you will see an unmistakable team effort:

All of these team efforts have collectively led the editor of World Trade 100 magazine (the Sports Illustrated of economic development) to declare: “the transformation that’s taking place in New Orleans both socially and economically is stunning.”

85
previous Saints and the City
next All Saints Day