“I always tell people one never really owns a historic house,” says Eleanor Farnsworth, who has sold more than a hundred during her 27-year career as a Realtor in New Orleans. “If they buy, or have the good fortune to be brought up in one, it is incumbent upon them to be a good steward.” 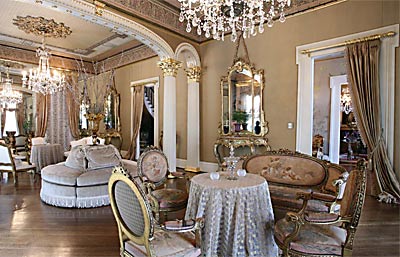 One such residence is the Maddox-Mclendon House on Prytania Street. Farnsworth has had the listing more than three times. The imposing home is both historic in age, built in 1852, and monumental in scale—some 9,309 square feet of living space, with several gardens and a pool.

The house was originally commissioned by Joseph H. Maddox, owner of the New Orleans Daily Crescent newspaper. He instructed architect John Barnett to make each room on either side of the 12-by-29-foot center hall exactly 21.3 feet or 18.8 feet wide. Why? Who knows, perhaps he was into numerology. The exception to his formula is the double-ballroom measuring 21.2-by-39.6 feet. And what a grand exception it is!

With soaring ceilings lit up by a matching pair of massive Baccarat chandeliers, floor-to-ceiling windows, the ballroom is accented with black Italian marble mantelpieces, parquet floors, fluted Corinthian columns with intricate foliate capitals that create an archway mid-room, and an elaborate painted ceiling motif that was taken from a tapestry and designed by a 19th-century Viennese artist. It is by any standard jaw-dropping.

While each new owner has been a good steward, each has tweaked, updated or in some way put their personal stamp on the house. 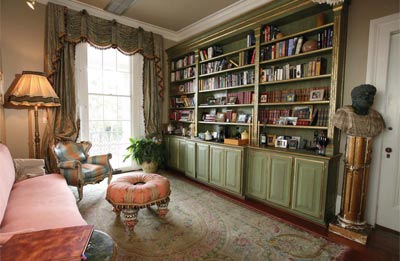 Restaurateur Adelaide Brennan installed the state-of-the-art kitchen. Gay Noe Mclendon did a massive restoration to the main house, pool house and gardens. (A hidden garden, where charming putti frolic in a fountain, is visible only from the dining room, which was once a screened-in porch). And at some point, Vera Reinike painted a mural of trailing vines and butterflies in flight for the center hall. Buzz Harper added his signature gold gilt to many surfaces. The last owners, George and Sharron Massey, reworked the large power room on the first floor and personal living quarters on the second and third floors into areas of comfort and grace. 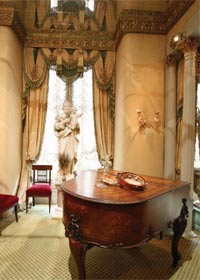 Many things remain unchanged, including the basic layout of the home. Called the Gold Room for decades, the ballroom is a reflection of an opulent era.

Across the wide center hall are two 18-by-19-foot rooms with vintages of the house’s history. A massive pocket door connects a less formal sitting room with a library, lit by a period Waterford crystal chandelier. The Masseys often used the room for family dining because the formal dining room, which runs the length of the back of the house, seats 24 at its table and is anchored with a small sitting area turned music room.

Throughout, the draperies—yards and yards of silk—have been roped, corded, fringed, looped, cascaded and in some cases embroidered with seed pearls. They are, in themselves masterworks of craftsmanship. Several rooms have their walls padded and covered with silk to muffle sound and add to the elaborate surroundings. It is all grand on a grand scale.

The Masseys infused the home with a more youthful air. “For the past several years, we put our contemporary art, Helmut Newton, George Dureau. Mario Villa, Michael Mott, Anders Moseholm, next to some of the Old Master paintings,” says Sharron, who has trained as a decorator. “We kept, edited and added pieces more timely or original to the house.

“It was a great house for entertaining, and, heaven knows, we did,” she continues, “but post-Katrina things changed. It was a lot of house for just two people.” So like others, they are passing the keys on. “We aren’t leaving the city, but we are downsizing. As for the house, it was a wonderful place to live for a while. We hope the new owners enjoy it was much as we did.”

And so, the house, a sentinel of history and salute to a golden era, prepares for its next chapter and stewards.