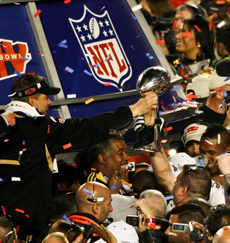 The number of oddities, coincidences and atypical happenings just cannot be counted, but they were in full measure during Super Bowl XLIV. Actual Saints-ones like Sts. Jude and Patrick–seemed to be guiding events more than humans in 2009-10. How else can you explain the tragic performance of Peyton Manning, the All-Pro, future Hall of Fame, New Orleans–born son of the team’s former icon, Archie Manning? Manning played the final card–an interception–into the hands of Tracy Porter, a man from Louisiana who played college ball at Indiana University, who proceeded to jump the route of another New Orleans native All-Pro, Reggie Wayne, taking it to the house. Saints fans everywhere stood up, looking to the heavens, hands outstretched, as though Manning–Manna was raining down before Porter had even reached the 40-yard line. Images of bad trades, devastating last second losses, so many hopes and prayers unanswered dissipated away underneath each of Porter’s footsteps. Somehow when a divine plan comes into focus, all the past suffering can seem to make sense as the plan is revealed, and never has this been as evident as with the Saints’ NFL Championship season.

Now, for the first time, it can be said out loud as frequently as desired without sounding like a lunatic: “Yes, the New Orleans Saints are the NFL Champions!”

The image and the telling of the comeback will forever be burned into Saints and city lore: Peyton Manning, sitting firmly planted to the Miami turf, put there by a strong block from big Will Smith, looking plaintively at coaches, at Wayne, and at a passing, gesturing Darren Sharper, to nowhere, to no one, perplexed, perhaps thinking it was not supposed to go like that. It was to be his moment, his coronation, his rise to the title of the NFL’s all-time greatest quarterback. It was not the Colts’ Super Bowl; it was his. For Manning and the Colts, the meaning and purpose had been narrowed. For Drew Brees, the Saints and their fans, the meaning and purpose had been expanded to infinite proportions. As the season grew, so did the imputations. In years past Saints fans had merely desired to win a game and reach the playoffs. This season it seemed that the fans, so used to turning inward in the dread of the fall sure to follow, had to progressively show more and more of their passions. As the wins grew in number and magnitude, so did the dreams; as the dreams grew so did the risk of disappointment; as the risks grew, so did the emotional rewards upon winning. Seemingly everyone local said in the Super Bowl run-up that it would be “okay” if the Saints won or lost, that they would be happy anyway–but deep down inside that was not true. It was a sham of a show. Inside every Saints fan, and even New Orleanians who had never been Saints fans, there was a burning lump of football lava that had ached with desire for victory for years. For sheer unbridled waves of triumphant supremacy, and more than anything the bursting of the city’s hot shell upon the sides of the Louisiana Superdome, and ultimately it became a monomaniacal focus releasing into a sudden, corporal exaltation that would prove to launch the biggest parade and celebration the city had ever seen. That is saying a lot but it is without exaggeration: Cars were left parked in downtown streets as though aliens had landed, people drove and flew in from other states, the population literally doubled, work stopped, the elderly left their houses, the young were brought with their cribs in tow, the brokenhearted wept, the divided joined and the consumed forgot their woes. It was a whisper on the wind growing to a roar: “the Saints have won the Super Bowl.”

Throughout, the Saints players themselves spoke unlike almost any other sports team in recent memory. In an age where the meme of “selfish millionaires” dominating the professional sports landscape has been common and popular, these men were something else. They spoke of a city. They spoke of children, of proud players past, they spoke of tradition, of giving, of meaning something more than just football and winning and losing. As the players gave to a city and Who Dats everywhere (this writer was given the gift of watching the game with his father, a season ticket holder since 1967, who flashed a smile wider than the Pacific Ocean as Drew Brees took the last kneel-down with 44 seconds left), perhaps the city bestowed special gifts to the players that they knew no other city ever could.

It is one thing to have a Championship; it is another to be proud of a team, of its players, of its fans, its colors, its locale, its history and what it means to those around you. What has happened here in 2009-10 is unique and needs to be remembered like a precious embrace.

There are perhaps slights and negatives felt along the way that could be accounted– Manning could not manage to remember Darren Sharper’s first name even though Sharper is a Hall of Famer in his own right; the missed contrast of the Colts who had abandoned their city of Baltimore in the dead of night versus the Saints who had stuck with theirs through the mire of disaster; the constant elevation of Manning to the neglect of Drew Brees; the repetition of Dwight Freeney injury updates at the expense of remembering that Will Smith would be playing all along. Such complaints now amount to minutiae while being mindful that winning well is as important as winning itself. The obstacles overcome magnify the victory itself and in that respect the Saints’ win is one for the ages; maybe in time it will prove to be one of the greatest ever (the closest that comes to mind is the legendary Brooklyn Dodgers’ “Boys of Summer” magical 1955 World Series championship). Regardless of the numerous seeming signs of fate, this was truly a team of men who forged their own destiny deserving of recognition in NFL history as one of the best.

In starting 13-0 and finishing 16-3, in terms of whom the Saints beat (both AFC Championship finalists, the defending NFC Champion Cardinals, the NFC runner-up Vikings), whom their opponents were led by (four future Hall of Fame quarterbacks, Brett Favre, Kurt Warner, Tom Brady, and Manning), and how they beat them (outscoring opponents by a regular season average of over 10 points per game, Sean Payton’s offense finishing first for the fourth straight year while Gregg Williams defense produced a fearsome awe in opponents causing a plus-18 turnover ratio right up through the finale), they belonged in the echelon of the league’s elite teams for any single season in the modern era. Sean Payton culminated this superior season with one of the most daring and brilliant coaching performances in Super Bowl history, featuring an onsides kick ambush and an offense that finished with six scores in its last seven possessions, while Gregg Williams almost negated the Colts’ top-flight offense in the last three quarters. The New Orleans Saints played so magnificently this year that it would be impossible to list the accomplishments, special moments, and statistics of each succinctly when the Super Bowl alone would fill a book.

In the end Drew Brees and his teammates fittingly rode on the outstretched, overflowing hands of Bacchus through the streets of the Capitol City of the Who Dat Nation like some returning Roman emperor flanked by his imperial guard, their gold shining like shields, the temple-like Gallier Hall a fitting motif for their victorious toast. Sean Payton held the Lombardi Trophy aloft like a golden fleece. It was a vision of a city, prouder than its modest habitation and accoutrements had let on, revealing its true self, showing to be the best, having proved it, glorying in it, and reveling. No other city could be so beautiful and strong as New Orleans was at that moment. It was a dream of a win, a dream of a city come to reality. Let it be so forever more.