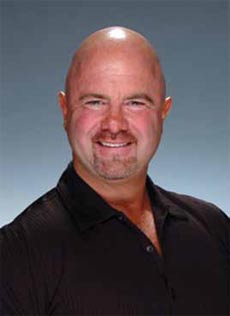 As a former gym owner who’s built his reputation on being physically fit, lifestyle strategist John Rowley knows how to stay in peak shape.
Just don’t expect him to be in the gym longer than 60 minutes.

That’s because Rowley, who recently turned 50, has learned from the likes of Lou Ferrigno and top trainers that it doesn’t take hours of pumping iron to maintain top form.

“The time commitment is not phenomenal, if you’re consistent in your workouts,” he says. “Most of the people who stay in shape dedicate about an hour a day to it.”

Rowley, who is a motivational speaker, author and wellness director for the International Sports Sciences Association, is a regular fitness commentator on Fox News, Martha Stewart Living Radio and other news outlets. He was a college athlete whose career was cut short by a near-fatal car accident. He launched a successful career in real estate in Manhattan and owned R&J Health Studio, a Brooklyn gym featured in the 1970s documentary Pumping Iron, with competitive bodybuilders Ferrigno and Arnold Schwarzenegger. He now lives in Raleigh, N.C., and continues to consult in the fitness industry.

Rowley is helping the Louisiana Seafood Marketing & Promotion Board on a campaign to promote the advantages of a diet rich in local seafood. The board is in the beginning stages of developing a fitness program incorporating seafood.

The program would launch at the beginning of 2011, says Executive Director Ewell Smith.

“Seafood is by far the best source of protein available, with the added benefit of the fish oils being one of the best sources of healthy fats,” Rowley says.

Not surprisingly, maintaining a proper diet is one of the main obstacles people face when trying to get back in shape. Working out is only half the battle. Rowley says that there is so much misinformation out there about which foods are best to eat and how much protein or carbohydrates we should eat, that many don’t know the rules of basic nutrition. “People will ask me: Is sugar a carbohydrate?” he says. “People are so confused that they don’t even know what a carbohydrate is!”

He blames the confusion on a diet industry that feeds off fads and quick-fix solutions. For Rowley, fitness isn’t just about the body. His philosophy is that for people to be at peak performance, they need to be focused on body, mind and spirit. That means eating right, exercising and working hard to stay challenged professionally.

What’s the first step to getting to peak performance?

“My advice would be to pick one area of your life that you want to focus on and do one thing every day to improve upon it,” he says. “Then once you feel like you are at a point with that, then pick another area. [Start this way] because it is difficult to pick 10 different things to focus on at once.”

The most important muscle to flex in this case is the discipline to make a lasting change. In today’s have-it-now, instant-gratification culture, “discipline” is a dirty word, Rowley says. “But our lives are built on habits, which are daily disciplines,” he says.

Focus and discipline are key traits of successful athletes and businesspeople.
In real estate, Rowley “had the unique privilege to see people at the top of their game.” These include people like Donald Trump, Harry Helmsley, Barbara Corcoran and others. Early in his career, Rowley would try to set up interviews with a successful businessperson every Friday. He would ask them four questions, like “When do you get up in the morning?” or “What’s important to you?” The first three questions always varied, but the last was always the same: “Would you mind showing me your day timer, so I can see how you schedule your time?”

Usually people were a little flummoxed but relented when he explained. “How you schedule your day shows how you live your life,” he says. “You may have overexaggerated the first three questions I asked or you may not have given me the whole truth, but if I can see your schedule and look at how you schedule your days just for a month, I can see what is important to you and I can learn from that.”

What did he discover? Most successful people get up early. Every successful person deals with what they need to do head on, he says. There was no procrastination. They seldom took long lunches and most of them found time for exercise.
That’s where Rowley learned time management is a universal skill that’s important in life and at the gym.