Shelter After the Storm 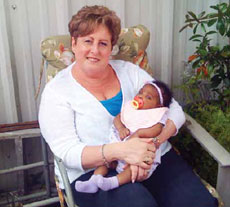 A few years ago, Jackie Silverman knew little about the problem of homelessness. “If we saw a woman on the side of the street, we would pull over and give her money, that was it,” says Silverman. After Katrina, though, she and her husband, Dan, founded the New Orleans Women’s Shelter, which serves the needs of homeless women and their children. “When we created our model,” Silverman says, “my first thought was, ‘If this happened to me, what would I want to bring my children into?’” Three years later, the shelter now has a professional staff and hopes to soon double the number of women it houses.

What are the origins of the New Orleans Women’s Shelter?
After Katrina I had a lot of survivor’s guilt, so I began giving back to the community. Common Ground had a very rudimentary shelter that was housing women and children. I started by trying to fix up that house. Instead of sleeping on the floor, for example, we got beds donated. Then Common Ground said they didn’t want to do this anymore. Dan and I thought about it, and we didn’t want to take over what they had. We had to do something that was better. We decided very early on that our niche was going to be women with small children and pregnant women.

Why focus on that group?
Pregnant women kept coming to us saying they were living on the street and nobody was helping them. Several of the shelters had shut down after Katrina. And I think at those that reopened, pregnant women were just too much of a liability.

Has the homeless population here grown because of the recession?
Yes. Pre-Katrina we had about 6,000 homeless. Post-Katrina for a couple of years it was estimated by Unity of Greater New Orleans to be about 12,000. And now the number is running somewhere between 17,000 and 19,000. Our waiting list tends to have 200 people on it at any given time, and we have 20 beds. That’s it.

How do women typically become homeless?
We’re finding a lot of our women become homeless through no fault of their own, other than poor choices. A lot of them came back to New Orleans post-Katrina and housing was double and triple what they were paying. They thought they could manage with a menial job. They lost the job, they couldn’t pay their rent and they got put out on the street.

What is the long-term impact on children who have spent time without a home?
They have anger issues: misbehaving in school, an inability to focus in school, medical issues.

Do you think the problem of homeless women and children is less visible?
People have always thought of a homeless person as being male and a derelict or mentally ill—as did I. I tell people that if you want to know what homelessness looks like, look in the mirror. If you stop to think about your life, if you don’t have any family resources, which a lot of these people don’t have, there is no place to go. Their mothers and aunties have all evacuated or they’ve come back and they’re barely holding on.

How long do the residents stay at the shelter?
The average stay is four months. About 20 percent wash out in the first couple of days. We have a rigorous program. You have to agree to no drugs, no alcohol. You have a curfew. Every resident is responsible for chores and cooking an evening meal for the house once a week. Plus you meet with our social workers and are partnered with an aide, who takes you through the process of opening a checking account, making a budget, writing a résumé. We’re not a bed-and-breakfast.

How long-term is the relationship between the shelter and these women?
Women can stay with us as long as they need to. We’ve had women who have been with us for 14 months. We still have women that two years after they’ve left us come to the shelter to use the fax machine or the computer. We’re also starting an after-care program. You leave us and we’re going to stay in touch with you and make sure things are going well.

Can we ever end homelessness in New Orleans?
Not the way we’re going. The need is so great, and New Orleans is so far behind. We’ve been broken, and it’s going to take a long time to fix what was probably already broken before the storm.