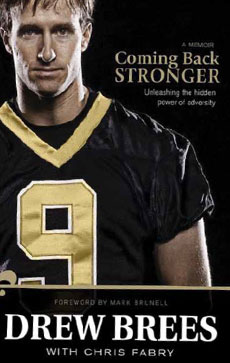 On February 7, just outside Miami, Tracy Porter’s “Pick Heard Round the World” capitalized the comeback of the nation’s greatest underdog and catapulted a team-city marriage like none other in American sports history, besides perhaps the 1951 Brooklyn Dodgers. Multiple dragons were slain along the way—chronic pessimism, longtime nemeses like the Vikings and Brett Favre, the Falcons and the Panthers, Jake Delhomme in the Dome, the inability to win the big game. On September 9, the Holy Grail of an NFL Championship banner will be hoisted for the cheering masses on the nation’s opening night of football when the Saints play Minnesota (again). When it is, the circle will be complete.

To paraphrase the great sportswriter Red Smith, speaking of the aforementioned Dodgers’ timeless victory: “Now it is done. Now the story ends. And there is no way to tell it. The art of fiction is dead. Reality has strangled invention. Only the utterly impossible, the inexpressibly fantastic, can ever be plausible again.”

Still, people want to know, they want to relive it, document what happened, and the task of that challenge has been picked up by the team’s standard-bearer, Drew Brees, in his newly published book, Coming Back Stronger. The tale is about the Saints, but it could be anyone’s story and anyone could use it to great effect in their own lives in terms of changing their attitude, seeing life differently so that life itself becomes different. Reading about Brees’ harrowing episode of having his right arm—his throwing arm, the arm his whole life and career depend upon—wrenched and torn asunder into unnatural and seemingly irreparable directions is both a metaphor for a city torn asunder by natural forces and a tonic for anyone feeling that life is overwhelming, that challenges are too great to overcome.

Brees tells of doing just that by exploring the range of emotions and the changing of his attitude as he faces a once-in-a-lifetime surgery, returns to his first practice to encounter the fear of realizing his arm might not ever perform like it once did, and gradually gains his confidence back through hard work and determination. Brees writes of the importance of his faith in God and the relationship with his wife, Brittany. Ultimately, not only does his attitude change from negative to positive, but so does that of his teammates, and that of the fans, and his very reality and that of the New Orleans Saints begins to change around him as a result. Throughout are lessons of resiliency, confronting adversity, finding and keeping faith in oneself and using all that to drive a desire to win a championship. The comeback is not just Brees,’ it is the whole city’s.

A key portion of the book details Brees’ recruitment, as the Saints were in what had seemed like a lopsided battle with the Miami Dolphins for his talent. One city was glamorous while one was mangled; one team had a winning tradition while the other had an inept past—it all favored the Dolphins. But while in New Orleans, something clicked for Brees. There was the warmth of the people; the commitment and belief of the staff in his ability to completely rehabilitate; the food; the offensive game plan Sean Payton had constructed around him. But there was something more, something he and Brittany felt in their gut, much to their surprise. “At one point we sat on the bed and just stared at each other. The revelation seemed to hit us at the same time. We couldn’t quite explain it, but it was almost like New Orleans was calling to us.” He goes on to say, “Miami had seemed to be such an obvious choice. We hadn’t been expecting this, and we certainly weren’t looking for it. But we couldn’t ignore the irresistible feeling—a sense of spiritual calling, even—that God wanted us in New Orleans. Maybe it was because we could approach the city from a different angle than perhaps anybody else. Where some people might look at the city and see disaster, we saw opportunity. Where some people might be deterred by the devastation, we were drawn to it.”

In the end it was faith that sealed the deal. The man leading the recruitment for the Dolphins, one Nick Saban, a man whose heart, or lack thereof, is well known to LSU fans far and wide, received a phone call from Brees when it was time for Brees to finally make a decision for both parties. When Brees most needed to hear belief in who he was and what he was about, he received a mere pause and a scripted deflection to the medical reports, which as Saban put it, had given Brees “a 25 percent chance of coming back and playing.” When it came to the Saints, Brees states, “They believed in me.” When the automaton-like Saban had finished, Brees’ heart and mind had made a resolution that will live in our locale’s lore forevermore: “Coach Saban, thank you very much for your time. I’m going to New Orleans.”

A lot of people in New Orleans can relate to that episode. Everyone who lives in this great city can tell of a similar internal dialogue and decision that came from the gut, firmly borne by faith, in oneself but also in the city and something intangible. What follows, amid the backdrop of roaring crowds and wildly devoted fans, is the epoch of Brees’ full recovery as a man and a player, his commitment, his desire, his passion, and his finally reaching the goal with his teammates and fellow citizens that they had all ached for for so long, to be champions despite having been told to give up. When the banner is raised on September 9, the final word in that story will be written.

100
previous Field of Dreams
next Kickoff to Glory