He’s Got the Look 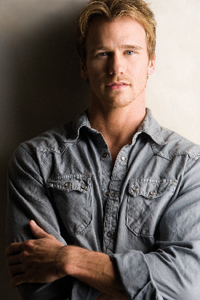 Rusty Joiner may look familiar, but you may not be able to figure out where you’ve seen this golden-haired, hard-bodied young man before. From ad campaigns for Abercrombie & Fitch, Prada and American Eagle to guest-starring roles on CSI: Miami, Bones, Close to Home and ER to commercial campaigns for Coca-Cola, Suzuki, Excedrin and Budweiser, Joiner and his all-American good looks have been everywhere. Readers of Vanity Fair, Rolling Stone, Cosmopolitan Men and Vogue Homme are likely to see his fine form adorning those pages as well.

Joiner is the most recognizable face in the fitness industry, thanks to the fact that he is the national spokesperson for Men’s Fitness magazine’s Fat to Fit Tour. As a remarkable athlete, this Alabama native is committed to spreading the word about getting and staying fit. As one of the “fattest” cities in the United States, New Orleans could sure use a friend with his wealth of knowledge on the subject. And with an acting résumé that continues to grow by leaps and bounds, it’s just a matter of time until he joins the ranks of Hollywood’s hottest stars.

Yet for all his amazing accomplishments, Joiner remains a down-to-earth, charming Southern gentleman. He was gracious enough to take some time out of his tight schedule to chat with New Orleans Living magazine.

Hi, Rusty! Wow, it’s easy to see how you became a model, but tell us how it happened and about
the tons of exclusive campaigns you’ve been featured in. I got my start with Elite Models in Atlanta after college at the ripe age of 23. An Italian talent scout happened to be in town, and two weeks later I was in Milan where I booked my first job ever—and it was for Prada. I even asked, “Who’s Prada?” [Laughs] I was fresh off the plane, head to toe in Abercrombie & Fitch with a huge country boy smile. But after three months, I was a “veteran” and returned to the states with a whole new image and the confidence to match. Incidentally, just shy of being home two weeks, I booked my first major campaign for my favorite—Abercrombie & Fitch! From that point forward, I traveled the world and continued working nonstop, booking almost everything I went out for. It was an absolute dream come true for me.

What ad campaign would you say you were best known for?
I’d have to say I received most of the recognition three years into my career when I won the Structure Men’s Underwear contest. We had incredible media coverage nationwide. Access Hollywood, Entertainment Tonight, and E! all did feature stories. I did a series of guest appearances on such shows as Good Morning America and The View, as well as a 28-city Valentine’s Day Tour across the country. I developed such a great partnership with the folks at Structure, they discontinued the annual contest and signed me to an exclusive three-year deal. Those were some wonderful years full of memories that will last forever.
And I’ve been seeing you in some great television commercials lately, too.
I’ve been fortunate to have great success with commercials since I began my acting career, booking at least three a year. My best year ever was 2006. I booked spots for Castrol, Bud Light, Budweiser and a major eight-spot commercial campaign for Suzuki that has attracted such a following, the ad agency created a special MySpace page dedicated to the commercials. I kicked off 2007 with a fantastic campaign for Excedrin.

I understand that you hold the record for the most covers of Men’s Fitness magazine. How astounding is that?
I would say I hold the record for the most covers in the last seven years. My October 2004 cover issue was their best-selling issue in the past ten years. They’ve been really loyal, and I continue to work out hard so they can come to me at any time to put me on the cover. I try to make it so they can depend on my shape to be the same year-round.

I hear that you are one of the nicest, most polite and charming actors in the business today … that’s some combination you’ve got going there!
Wow! That’s a huge statement. I just try to remember how fortunate I am to have been given the opportunity to travel the world and make a great living on what God has blessed me with. And I try to be nice to everyone I meet. It’s just who I am as a person to want to smile and encourage others to do the same. Makes me feel good!
Would you say acting is your main passion?
I have many hidden talents. I love being creative, and I can fix anything! I’m very handy around the house! But yes, my true passion in life is acting.

You’ve made an impressive transition from modeling to acting in a relatively short period of time. How difficult was that?
Talk about a humbling experience! Try changing careers in your late twenties going from the top of your game to starting all over and having people look past you when you speak to them. That challenged me to work harder and eventually with a steady smile on my face, I proved I could make it in Hollywood as well.

Your first acting experience was with Heather Locklear on Spin City. Tell us how you landed that role.
It was probably my third or fourth audition since I moved to Los Angeles. I just went in and did what I thought I would have done in real life and it worked. Heather was so wonderful, very polite and friendly. I knew right then this is what I was meant to do.

Is acting an easy thing for you?
It’s incredible how the more you experience it, the more you realize it will be a life-long learning process. Every new role is a gift that I welcome with great enthusiasm!

Your first feature film was the hilarious Dodgeball, with Ben Stiller. You were Blade, one of the members of Ben’s dodgeball team, the Cobras. What did you take away from that filming experience?
It was an invaluable acting lesson, being able to watch that incredible cast prepare for a scene and then jump right in. They would do the scripted takes and then get creative and have fun by ad-libbing their lines. I had to play a tough guy, and it was so hard trying not to laugh when Ben and Vince Vaughn would come up with the craziest dialogue and then bust out laughing themselves!

What are some of the recent projects you’ve been involved in as an actor?
I have a great role in the upcoming Russell Mulcahy thriller Resident Evil: Extinction with Milla Jovovich, which comes out in late September. I play an evil survivor that captures Milla’s character; it was so different playing a villain! I loved it! And I just guest-starred on a wonderful episode of the CBS drama Close to Home. I have several projects in the works, including my first lead role in a film that I’m very excited about, which will start shooting early fall.
And you will soon be guest-starring opposite Kyra Sedgwick in an episode of The Closer, which is a huge hit on TNT …
Interestingly enough, the producers called me in to read for a “good guy” role but ended up bringing me back two days later to read for the role of another villain type, which is a much meatier role for me, and I love that challenge. I’ve watched the show since season one. Kyra brings so much to her character every week, and being afforded the opportunity to work closely with her was a great experience. You’ve been to New Orleans before, in conjunction with Men’s Fitness magazine’s Fit to Fat Tour in recent years. I understand that New Orleans has been considered one of the “fattest” cities in America. You guys have been in the top five several times. I would take it as a compliment that your food is just too good! [Laughs] But it is great to raise awareness that you can enjoy good food and take better care of your health so that you can enjoy it for a much longer time.
What did you do while you were here for that tour, and were people appreciative of the advice from you?
We were able to do an interview for the morning news show to expose the facts as to why New Orleans was on the fattest list and share some quick, easy ways to help you get off the list and still enjoy life in the Big Easy. We made a public appearance at a 5K run/walk, and I got a huge, warm welcome from everyone, and they really had such positive attitudes about getting in shape and wanting to commit to fitness. We had a day full of exercise demos and nutritional counseling that was packed with community involvement. And I even celebrated with some hot chocolate and beignets!

I understand that you really loved your time in New Orleans. What did you think of the city?
I was able to take a midnight walking tour and everything was just so peaceful and quiet. There’s so much rich history and culture in New Orleans, and I had a real appreciation for its beauty in the quiet hours. I just loved being down by the river and watching the locals mix with the tourists. People were so friendly and that was a true enjoyment for the visitors.
You had visited New Orleans before Hurricane Katrina hit. How did hearing about the storm affect you?
I’m always affected by tragedy of any kind. I try to put myself there and really feel what people are going through. I had many friends lose homes to Katrina, and I did whatever was necessary to help out. I know the selfless donations of people around the country helped so much, and I just continue to pray for the families that suffered through the hard times.

You are a southern boy, born in Alabama and raised in Georgia. You must have grown up eating some hearty, comforting, fattening southern foods! Do you occasionally indulge in those kinds of naughty eats?
Everyone has heard about moderation. It’s probably the most simple and brilliant of all truths. I love every southern food I’ve ever had, especially fried chicken, cornbread, pecan pie and banana pudding. If you’re going to cheat, only have a bite or two and definitely not more than half. Life’s too short not to enjoy the delicious things, but don’t make it shorter by cleaning your plate!
So what’s the best thing the average person can do on a daily basis to stay in shape?
Run those stairs! Three sets of push-ups and sit-ups, too, as many as you can do for each set. Only eat half of what’s on your plate every meal! And don’t forget to smile and tell your friends and family you love them morning, noon and night—every day!

Sweet! Will you come back and visit us in New Orleans soon? Maybe teach us how to eat better or have some beignets with us?
Sure! Until then, take care New Orleans, and I can’t wait to see y’all again soon!

And Rusty, we’ll all be in terrific